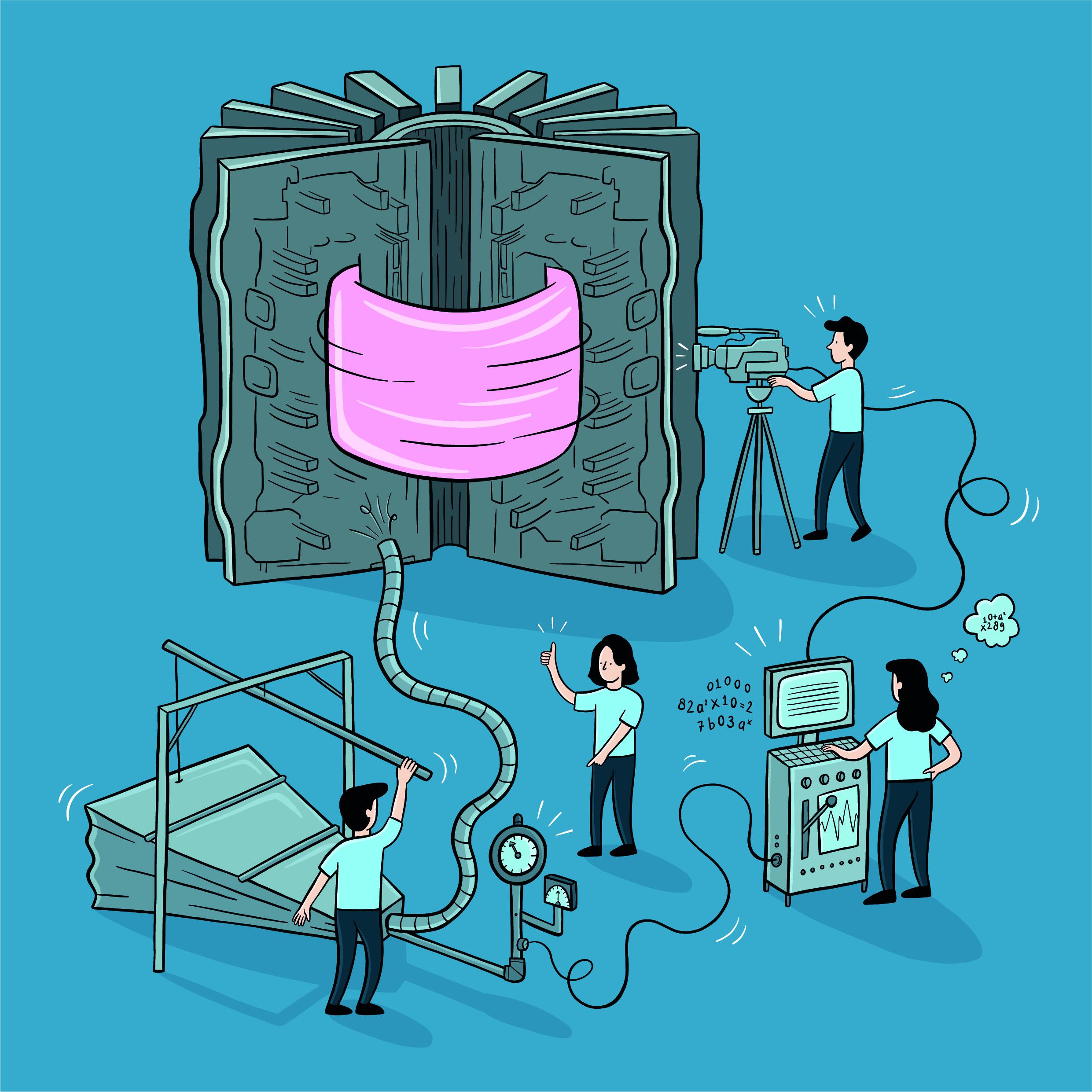 The core of a fusion reactor is incredibly hot. Hydrogen, which inevitably escapes from it, has to be cooled on the way to the wall, otherwise the reactor wall would be damaged. Researchers at the Dutch institute DIFFER and the Swiss Plasma Center at EPFL have developed a strict measurement and control method for cooling very hot particles emerging from fusion plasmas. This milestone in fusion research is published in Nature Communications.

“We are moving from studying to controlling. This is crucial for the future of fusion reactors, ”says first author Timo Ravensbergen (DIFFER). “We measure, calculate and control at incredible speed.” Fusion energy is a promising sustainable energy source. In a fusion reactor, extremely hot hydrogen plasma is suspended by magnetic fields. However, there is always a fraction that escapes. In order to prevent the reactor vessel from being damaged, the escaping hydrogen must be cooled on the way to the wall.

The cooling can be achieved in various ways, for example by injecting a gas. “If you inject too much additional gas, however, the plasma is cooled too much, which reduces the output,” says co-author Christian Theiler (Swiss Plasma Center, EPFL). It is therefore necessary to constantly control the cooling so that the reactor can cope adequately. Matthijs van Berkel (DIFFER): “The ability to precisely control the cooling is expressly stated in the European fusion program (EUROfusion) as a necessary step towards fusion energy. It is fantastic that we can now contribute. “In Nature Communications, the authors describe how the emerging particles can be cooled quickly and in a controlled manner using an innovative feedback control system. The experiments were carried out in the TCV tokamak, a fusion research machine at the EPFL’s Swiss Plasma Center.

Escaping hydrogen is discharged via the “exhaust gas” of the reactor. This exhaust gas is called a divertor, in which the plasma heat losses are recorded. The process of strong cooling near the divertor is called divertor detachment. It reduces the plasma temperature and pressure near the wall. Fusion physicists already have a lot of experience with this process, but this is based in part on intuition and experience from previous measurements. Now it’s done differently. “We have developed a closed system,” says Van Berkel, Group Leader Energy Systems & Control. “We combined a lot of different techniques, that makes it unique. Our systems engineering approach can be applied to other fusion reactors. “The experiments are proof of the principle. Van Berkel assumes that the method – with adjustments – will be applicable in the large fusion reactors ITER and DEMO.

The closed cycle of measuring, calculating and controlling to prevent the tokamak wall from being destroyed © Julia van Leeuwen

For this research, the researchers used the MANTIS camera system on the TCV tokamak. This multispectral Advanced Narrowband Tokamak Imaging System was developed by DIFFER, EPFL and MIT. The researchers adapted the system so that camera images were converted into data from which a computer model could calculate the optimal cooling under various conditions in real time. All of this happened with considerable precision: the status of the plasma is determined 800 times per second.

A new real-time image processing algorithm developed by DIFFER analyzes the MANTIS images. The algorithm calculates how much you need to cool down and then automatically controls the gas valves. Finally, the researchers created a model of the system by again using the camera to analyze how the plasma reacts to the gas introduced. “With this model, we determine the dynamic relationship between the control of the gas valve and the heating front,” says Van Berkel.

The system was tested on the TCV tokamak. “It is a very flexible device with which ideas can be developed and tested relatively quickly,” emphasizes Theiler. Van Berkel agrees, “TCV is a fantastic machine for testing control technology with a state-of-the-art real-time control system.” Van Berkel says the results came quickly: “In just four experiments, we managed to get a feedback control of the plasma in the Close to the divertor. This shows that our systematic approach works. “

A follow-up proposal has already been made. The researchers only used one MANTIS camera while the system has ten. The researchers also want to use the other cameras so that they can control the process even more precisely and control additional key processes in the divertor.

Fusion, the nuclear reaction that powers the sun, has a high energy potential, is safe and environmentally friendly. Research in this area is being driven by the international ITER reactor. While the giant research machine is being assembled in France, scientists from all over the world are working on the next steps: Using it, they will produce fusion reactions on a large scale. Fusion occurs when nuclei of light atoms are heated to a hundred million degrees and form a gas of charged particles called plasma.

Infowars among latest to draw FDA warning over COVID-19 claims