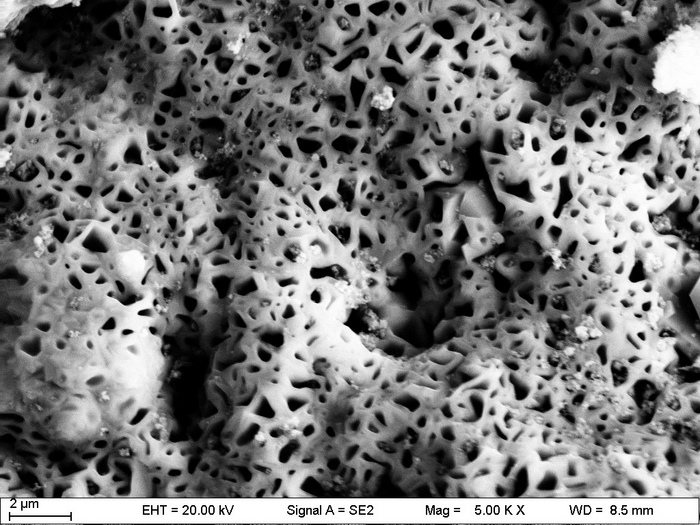 image: Honeycomb structure with oxygen-poor pores at the top of magnetite layer on a martensitic steel CLAM exposed to lead-bismuth eutectic at 500 ºC
view more

Recently, the research team led by JIANG Zhizhong, from Hefei Institutes of Physical Science (HFIPS) of Chinese Academy of Sciences (CAS), found a honeycomb structure in localized regions at the top of the magnetite layer on martensitic steel and analyzed its formation reason and process.

Small nuclear reactors have a good application prospect in marine power, regional power supply, seawater desalination and other fields. The lead-cooled fast reactor with lead-bismuth eutectic alloy (LBE) as the main coolant has unique advantages in miniaturization: compact core, high nuclear heat transfer efficiency and simple auxiliary system. However, homogeneous oxidation corrosion or dissolution corrosion may occur in steel Materials, and LBE infiltration and pitting corrosion may also occur in local areas, due to the high solubility of Fe, Cr and Ni in LBE at high temperature. Pitting corrosion is one of the most destructive forms of corrosion, which will seriously affect the long-term safe service of small lead-cooled fast reactor.

“We found that the honeycomb structure was composed of many oxygen-poor pores and surrounding net-like branches,” said LUO Lin, one of the key staff of the research team, “Low oxygen concentrations promoted the formation of honeycomb structures in a shorter time and more areas.”

This study showed the presence of honeycomb structure meant that the low dissolved oxygen concentration in LBE was low, and the design of oxygen control system needed to be optimized.

Disclaimer: AAAS and EurekAlert! are not responsible for the accuracy of news releases posted to EurekAlert! by contributing institutions or for the use of any information through the EurekAlert system.