And there are fresh contentions that Georgia Power may have tried to hide the project’s rising costs so that work would be allowed to continue. The for-profit monopoly utility has consistently underestimated costs of the expansion.

Many of Georgia Power’s 2.6 million customers already are paying the project’s financing costs, will see their electric bills rise more for Vogtle’s construction and possibly could be hit with additional increases because of the latest problems.

Testifying in a December state hearing, independent monitor Don Grace said he believed Georgia Power repeatedly gave unreasonable projections because the company has been “trying to continue to justify the project.”

Grace, an engineer and nuclear industry veteran hired by Georgia regulators to provide an unvarnished view of the project, suggested Georgia Power’s goal is “to delay as late as possible what the real costs are going to be. I don’t know, certainly that is a valid question that one would ask.”

Waynesboro: Exterior construction is seen underway on Unit 4 (at left) beside the first new reactor area (Unit 3) at right, where construction work and remediation of quality problems are going on inside at Georgia Power’s Plant Vogtle on Tuesday, Dec 14, 2021, south of Augusta. Curtis Compton / [email protected] 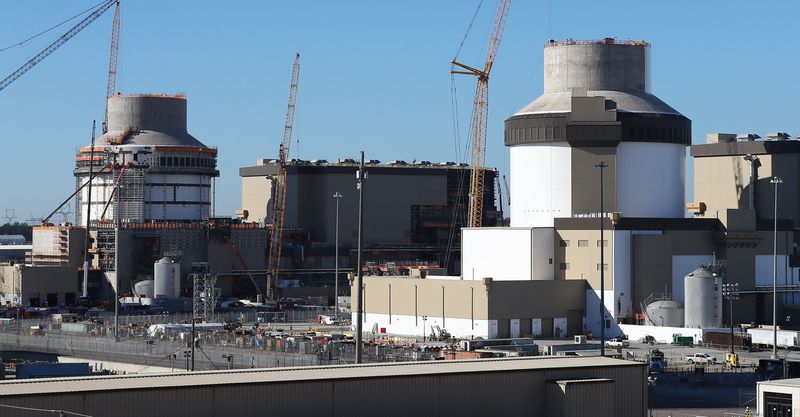 Waynesboro: Exterior construction is seen underway on Unit 4 (at left) beside the first new reactor area (Unit 3) at right, where construction work and remediation of quality problems are going on inside at Georgia Power’s Plant Vogtle on Tuesday, Dec 14, 2021, south of Augusta. Curtis Compton / [email protected]

“You still don’t get it”

At the beginning of 2021, Georgia Power officials expressed high hopes. Leaders of the Atlanta-based utility confidently predicted that, by November, Georgians finally would get electricity from the first of Vogtle’s two new reactors, nearly 11 years after customers began paying for it and more than five years after initially planned. Construction on that first new unit at Plant Vogtle, located south of Augusta, was more than 94% complete, the company said.

But within months, company leaders had pushed back the projected completion date of the reactors four times. They now say the first reactor may not be done until late September 2022. Independent monitors say the company is still underestimating how long it will take. Grace compared it to trying to drive up a snowy hill — ‘‘The wheels are turning, money is being spent,” but progress is slow and sometimes “you are actually slipping backwards.”

Georgia Power announced hundreds of millions of dollars in new costs in 2021, on a project that was already billions of dollars over budget. State monitors say the company is still off, potentially by another $1 billion for the total project. Estimates vary, but it appears the construction and financing cost of the project has essentially doubled, perhaps to more than $28 billion for all the project’s owners, including Georgia Power and affiliates of electric membership corporations and city utilities.

Completing fixes has been “grindingly slow,” in part because many problems were caught after other equipment was installed, blocking easy access in tight spaces, according to Steven Roetger, the lead analyst on the project for the elected Georgia Public Service Commission, which regulates Georgia Power.

Mistakes made earlier in the project were later repeated, such as not having a corrective action program that worked, Roetger said.

Testifying in a December PSC hearing, he said, “I can look back through the history of this project and point out six different times when it happened.”

“And you still don’t get it,” he said, apparently referring to project leadership.

PSC staff and monitors had long been critical of Georgia Power’s strategy to speed up the project to meet unrealistic deadlines. They said it actually increased delays by deprioritizing quality and pushing back testing and review steps.

The strategy has left a backup of 25,000 unfinished company inspection reports, an “almost unimaginable” amount, Grace testified in December. 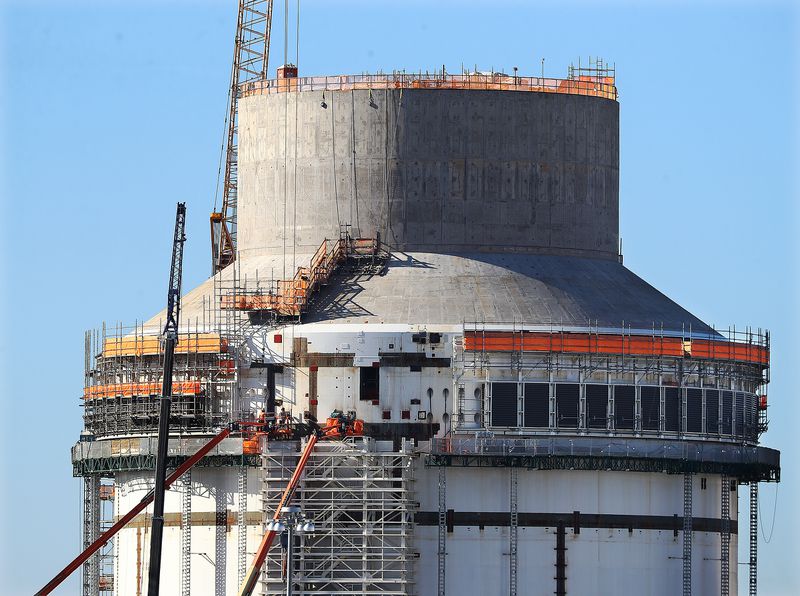 We always submit our best estimate”

For years, Georgia Power set and stuck with projections that monitors and PSC staff warned were wrong.

During a December hearing, Glenn Carroll, a representative of Nuclear Watch South, a frequent critic of the project, cited the consistently incorrect estimates by company executives and asked, “When does that become fraud or concealment? They are not dumb, right?”

Roetger, the PSC analyst, responded: “I can’t really answer that question. I’m not a criminal attorney.”

Georgia Power chief financial officer Aaron Abramovitz said in an email to The Atlanta Journal-Constitution that “We always submit our best estimates regarding cost and schedule to the Georgia PSC — under oath” and the company “would disagree with any claim to the contrary.”

“We knew building new nuclear units would be challenging,” he wrote, “and, when we get new information or identify new challenges we have to work through, we always factor that into our estimates.”

Abramovitz also said in an interview it would be unreasonable for him to predict that there will be no additional cost overruns or delays on the project.

Georgia Power had not expected the level of quality issues experienced so far, he said. Still, he said, the project’s major players “are all doing terrific work at the site.”

Asked why quality issues have been worse than expected, he said, “It’s not about why. It’s just the facts of where we are at.” He said that more details will be revealed as part of a later PSC review of costs closer to the project’s completion. 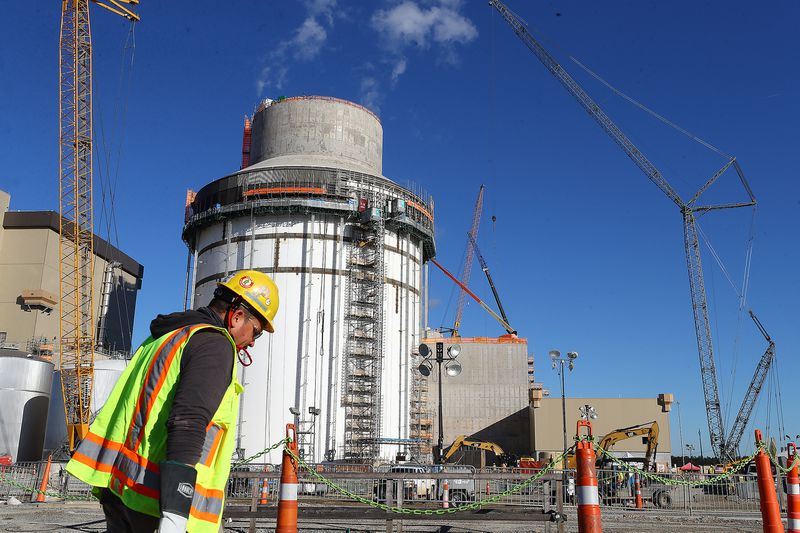 Carbon-free power but at a heavy cost

The expansion of Vogtle beyond its two existing reactors promises decades of additional electricity generation without carbon dioxide emissions, which have been tied to climate change. It is slated to be the nation’s first newly built commercial reactors in generations. Republican and Democrat presidential administrations have backed the project, which benefited from a newly streamlined regulatory process and landed billions of dollars in federal tax credits and loan guarantees.

But with the project’s cost soaring, Georgians will still end up paying tens of billions of dollars more for Vogtle’s new electricity than they would have for other kinds of electricity generation, according to projections from monitors and PSC staff.

Even before the work is finished, the average residential Georgia Power customer will have paid nearly $900 in project financing costs, company profits and money to cover income taxes on those profits. Still to come: a $185-a-year increase in average residential rates to cover construction costs and more Georgia Power profits, if the PSC approves all the company’s Vogtle costs, according to monitors and state staffers.

Through a spokesman, both PSC chairman Tricia Pridemore and vice chairman Tim Echols declined to comment.

Lauren “Bubba” McDonald, the only current PSC commissioner who took part in a 2009 vote to approve the Vogtle expansion, said if he had known how much the project would end up costing, he “would have probably had a different perspective.”

He questioned why, given the level of the troubles this far into the project, he hasn’t heard about executives or others being fired or otherwise held accountable by Georgia Power.

The problems have been frustrating for some, including Liz Coyle, the head of Georgia Watch, a consumer advocacy organization.

The PSC is making decisions to keep the project alive based on commitments from Georgia Power, she said, which has “misled the Public Service Commission and the public about their ability to manage this project effectively.”

“It is just infuriating,” she said.

1970: Georgia Power’s Board of Directors votes to build a four-unit nuclear power facility.

2009: Georgia Public Service Commission approves Georgia Power’s request to begin construction on two new Vogtle reactors. State lawmakers and Gov. Sonny Perdue allow Georgia Power to pass on financing costs to customers before the project is slated to be completed in 2017. Outside groups and PSC staff warn about risk of higher costs and delays.

2015: The company and construction contractors sue each other over delays that add more than $3 billion to the project and three years to the completion date.

2016: Georgia Power agrees to controls on the project’s costs and to short-term profit penalties if the project isn’t completed by the end of 2020.

2018: Georgia Power announces Vogtle’s cost will increase by more than $2 billion, some of which the company said it wouldn’t try to pass on to customers. Georgia Power’s Vogtle co-owners agree to stick with the project. PSC staff express doubt about the company’s latest schedule and warn it could lead to bad decisions.

2020: Nearly 2,000 workers are cut from the Vogtle project as the pandemic grows. In late October, both Georgia Power’s retiring CEO and his replacement express confidence in meeting the latest deadlines.

March 2021: Company discloses more quality problems on project and efforts to solve them.

April 2021: Company says first reactor, slated to be in operation in November, won’t be finished until late December.

May 2021: Company says first reactor now won’t be in operation until sometime in the first three months of 2022.

June 2021: Independent monitor for state predicts first reactor won’t be in operation until the summer of 2022, at the earliest. U.S. Nuclear Regulatory Commission announces elevated review into quality problems and how they were addressed.

July 2021: Company announces more cost increase for its share of the project and extends timetable for each reactor by another three to four months.

August 2021: NRC rules that it should increase oversight of the project as a result of quality and control problems.

October, 2021: Company announces an additional three-month delay to its schedule, citing “construction challenges” and need for comprehensive testing to ensure standards are met.

December 2021: Independent monitors and PSC staff say total construction costs could rise another $1 billion and predict the first new reactor won’t go online until November of 2022 or even February of 2023 and that the second reactor will be finished a year later.