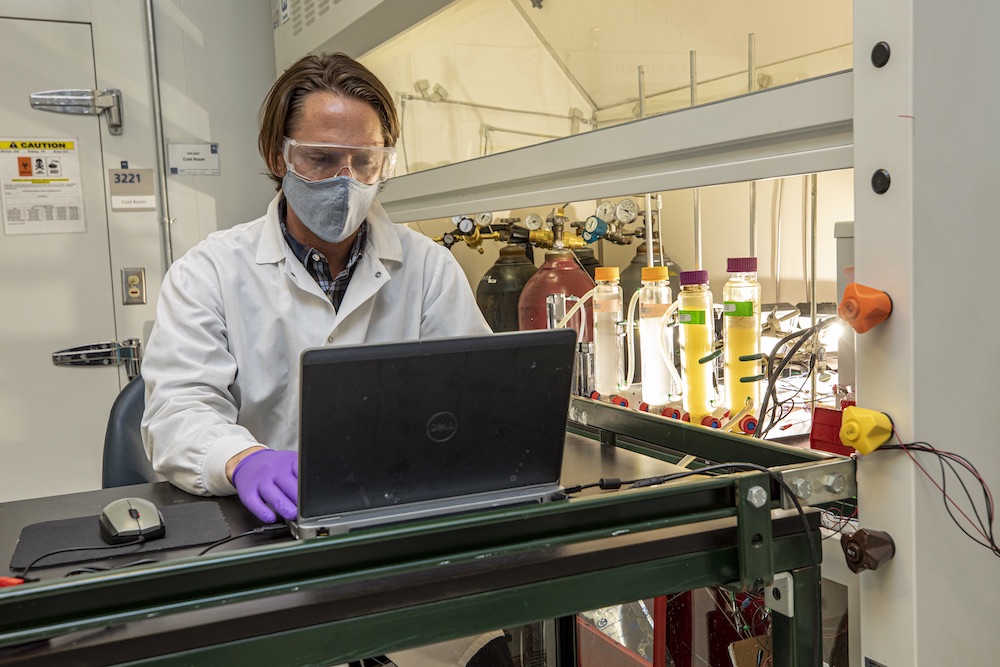 How Microorganisms Can Help Us Get to Net Negative Emissions

Many of the common objects in our daily life – from building materials to plastics to pharmaceuticals – are made from fossil fuels. To lessen our reliance on fossil fuels and cut greenhouse gas emissions, society has increasingly sought to turn to plants to make the everyday products we need. For example, corn can be converted into corn ethanol and plastics, lignocellulosic sugar can be converted into sustainable aviation fuels, and colors can be made from soybean oil.

But what if plants could be removed from the picture without the need for water, fertilizer, and land? What if microbes could be used to make fuels and other products instead? And what if these microbes could grow on carbon dioxide and at the same time produce valuable goods and at the same time remove a greenhouse gas from the atmosphere, all in one reactor? To be too good to be true?

Scientists at the Department of Energy’s Lawrence Berkeley National Laboratory (Berkeley Lab) have made good progress in implementing this technology. Led by scientist Eric Sundstrom, a scientist in the Department of Biofuels and Bioproducts Development (ABPDU), and postdoctoral fellow Changman Kim, the project combines biology and electrochemistry to create complex molecules, all powered by renewable energy. With carbon dioxide as one of the inputs, the system has the potential to remove heat-storing gases from the atmosphere, or in other words a negative emission technology (NET).

Both the scientific community and policy makers agree that NETs can be an important tool in the fight against climate change by reducing the concentration of greenhouse gases in the atmosphere. Berkeley Lab researchers are pursuing a number of negative emissions technologies. (Read more about “A sponge to soak up carbon dioxide”.) Sundstrom’s project was launched two years ago as part of the laboratory’s LDRD (Laboratory Directed Research and Development) program.

Question: How did this project start?

At ABPDU we work with a range of products. Virtually anything made by the chemical industry – you can find a way to use microbes to make these building block molecules, then replace the petrochemical or even the agricultural equivalent of that product. There is a lot of power to do practically anything with biology. It is just a question of whether it is economical to do so.

A popular area for us right now is food proteins. For example, you could construct a yeast to produce a milk protein. So you can make chemically identical milk, but from yeast, so you cut out the cow. We support companies that make all kinds of products from food proteins to biofuels to bio-based skis, all of which use microbes. The common thread is that the vast majority of these companies use sugar, a relatively expensive and environmentally friendly material, as their primary feedstock.

So we had an idea: can we do this type of organic production, but instead of using a vegetable carbon source, can we turn off the farm and use carbon dioxide directly as the carbon source for the microbes to grow? And can we use electrons from renewable electricity to provide the energy necessary to create the same suite of products?

Q. That sounds exciting, but complicated. How exactly would that work? And what is the name of this technology anyway?

People call it different things. Electrons to products. Or electrons to molecules is popular. Or electric fuels.

We combine two steps to convert CO2 and electricity into bioproducts in a single reactor. This includes an electrochemical step – splitting water to produce hydrogen and oxygen – and a biochemical step in which hydrogen, oxygen and CO2 are microbially converted into biomass and ultimately into products.

The hard part are the microbes. Every microbe eats something to live, but very few microbes eat electrons. So can we convert electricity into something that microbes can easily eat? So we’re looking at a very simple possibility: if you apply electrical current over water at a certain voltage, the H2O splits into hydrogen and oxygen, and then the gases bubble out. And there are groups of bacteria that consume hydrogen as an energy source and then use carbon dioxide as the carbon source for growth. This part is relatively well known.

We try to combine these two processes. They have the electrodes in the water and they are gushing out gas. And then we can add CO2. Now we have the three ingredients we need, hydrogen, oxygen and CO2, all in the water, and then we can add microbes, all in one tank. By combining the electrochemical process with the microbial process, we can use the electrodes themselves to dissolve the gases in the bioreactor, simplify the reactor design and save a lot of energy. That’s the exciting part.

As part of the LDRD project, we optimized the electrolysis conditions and the microbial load for mutual compatibility and set up the system for operation on a solar panel. We also showed that the microbes can be genetically engineered so that we can now produce complex molecules directly from photons and CO2 in a single tank.

Question: What kind of microorganisms are you using and what were the challenges to get this system working?

Electrolysis creates a lot of undesirable things. It’s never 100% clean and efficient. You get things like hydrogen peroxide or the electrodes themselves contain metals that can dissolve and poison the biology. And so, there are many toxicity issues to deal with in order for everything to work together in one vessel.

The compatibility between electrochemistry and organism is important. Electrochemistry likes to operate at really high or low pH and temperature for efficient hydrogen production. Previous work has dealt almost entirely with strains that are easy to work with in the laboratory, but which may not be the best choice for compatibility with these systems. So we’re looking at different microbes that thrive in extreme conditions and have a natural resistance to certain types of toxicity.

We focus on getting as much electricity as possible and as efficiently as possible into the bugs and making them grow happily. We did that. Now we’re starting to think about what we could do because once we have the bugs happy we can talk to the ancestral engineers and they can start chopping the genes and instead of just growing the microbes can use a product like fuel or building materials produce. We have now shown that this type of deformation technique is possible in our system for an example molecule, a natural pigment.

Question: What kind of products would these microbes make?

One of the reasons we like to have oxygen in there is because the organisms that grow with oxygen can produce a wide variety of things. You can make fat, you can make protein, you can make jet fuel straight away. There’s a lot of cool biology you can do. And there are a lot of people at Berkeley Lab who specialize in genetic engineering of these microbes. Berkeley Lab researchers developed things like methyl ketones, which are basically a direct substitute for diesel fuel. So we could literally just have one tank draining off a solar panel – right now a desk lamp is lit on the solar panel – we’re putting in CO2, and once the microbes are constructed you get diesel fuel that just goes to the top of the tank. You can skim that. It’s a very clean, simple process.

Question: How would this work in a real environment?

This is a question the DOE is only just looking into – where would you put this? You want a concentrated source of CO2 and an inexpensive renewable energy source, be it solar, wind, or hydropower. Much of the current rationale has to do with ethanol plants in the Midwest, where there is wind power, and the CO2 from ethanol plants is almost entirely pure. And an ethanol plant already has devices for biological and chemical separations.

Question: How do you envision this technology that fits into the fight against climate change?

I think electron-to-molecule technology in general will be a response to the electrification of the last segments of the economy that are still dependent on fossil fuels. It’s hard to electrify a long-haul aircraft, missile, or ship. But if you can use electricity to make the fuel, that’s one way to electrify the rest of the transportation.

I don’t want to give the impression that biology is the only way to do this. But I think biology is an important way of doing this, and that biological conversion can produce products with a specificity that the other approaches really cannot. I think there is potential to move the bioeconomy in general from agricultural commodities to electricity, which would be a really exciting prospect in the long run.

/ Public release. This material is from the original organization and may be of a temporal nature and may be edited for clarity, style and length. Full view here.

Letters to the editor – The Economist