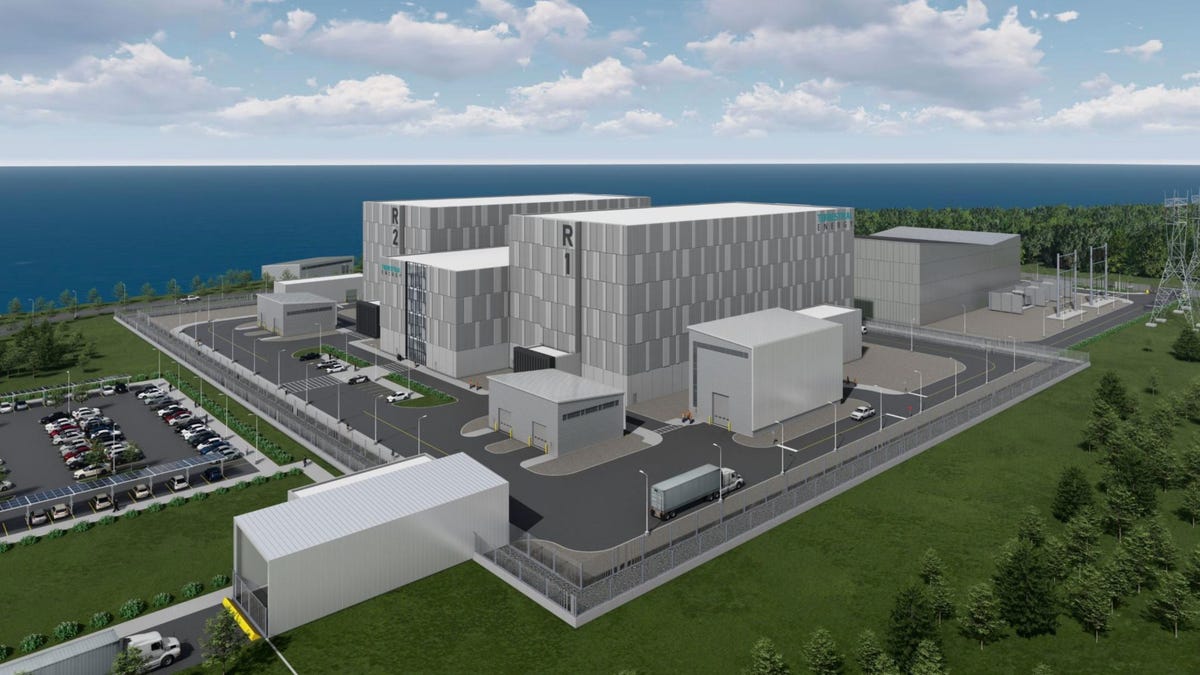 The United States and Canada have a lot to collaborate on in the nuclear energy field, and they seem to be doing a good job of it. Each country is considering each other’s reactor designs and each has funded or chosen to review some of those from both countries.

Illustration of the IMSR®400 power plant in the configuration proposed for Canada’s Darlington site. … [+] The IMSR®400 has the capacity to generate 390 MW (net) of clean, reliable and carbon-free electric power on a 7 hectare site (17.3 acres).

And recently, the US Department of Energy gave a $3 million grant to Canada-based Terrestrial Energy to support licensing and commercialization of its Integral Molten Salt Reactor (IMSR), a Generation IV nuclear power plant. The largest of the DOE awards announced last fall, the award supports modeling and simulation for the off-gas systems of the IMSR power plant, supporting the company’s regulatory program for US NRC licensing.

The University of Illinois has partnered with Canada’s Chalk River site to demonstrate a Generation IV SMR, the MMR, from Ultra Safe Nuclear.

Terrestrial Energy seeks to top the myth that nuclear plants must be the traditional water-moderated-water-cooled reactors. Their Generation IV IMSR operates at 700°C, 375°C hotter than conventional nuclear reactors, and drives net thermal efficiency to 44%. This is a level of efficiency nearly 50% higher than conventional nuclear power plants and significantly lowers electricity generation costs.

As with all SMRs, TE’s IMSR, once commercialized and licensed, would produce zero-emissions electric power and would have impressive load-following capabilities – features prized by electric power utilities as they work to balance the variability of wind and solar power with demand loads .

An advantage of the high-temperature heat from an IMSR plant is that it would be delivered as a molten salt mixture using an inexpensive pipe loop, using an approach already in industrial use today. As a result, the IMSR power plant can replace fossil fuels in producing hydrogen and ammonia, chemical processing, and new applications such as clean synthetic transport fuels.

Today there are many industrial applications relying almost entirely on fossil fuels today for thermal energy – the industrial sector is responsible for a whopping approximately 30% of emissions and has resisted attempts at becoming net-zero.

The face of a CANDU reactor core, with hundreds of pressure tubes that are able to be refueled … [+] during operation. With a Th-U mix fuel like ANEEL, they only need to be filled one-eighth of the time.

Canada’s electricity system is among the cleanest in the world, thanks to hydro and nuclear power, a policy review by the International Energy Agency has found. Launching the report, the agency’s Executive Director Fatih Birol praised Canada’s leadership in the development of small modular reactors and expressed the agency’s support for the Canadian government’s “ambitious” clean energy transition.

According to the IEA report, Canada has made a series of entering international and domestic commitments since the last IEA review in 2015 to put the country on a path towards transforming its energy system. Canada’s electricity system is already 83% non-emitting – thanks to the “dominance” of hydropower and an “important role” for nuclear – and among the cleanest in the world, and the nation has set a target to cut greenhouse gas emissions by 40‑45% by 2030 from 2005 levels and to reach net zero emissions by 2050.

“Canada has shown impressive leadership, both at home and abroad, on clean and equitable energy transitions,” Birol said.

The IEA report also recommended that Canada “foster international collaboration, notably for international licensing of innovative SMR technologies and the use of CANDU nuclear reactor technologies.” This last point is critical to Canada’s and other countries’ future with nuclear as the CANDU is Canada’s flagship design, is considered as a National Treasure, and its use should expand worldwide along with many other designs.

According to the World Nuclear Association, there are 48 CANDUs and other Pressurized Heavy Water Reactors (PHWRs) in operation worldwide, with a combined electric generating capacity of 24 million kilowatts. The largest fleet of such reactors is in Canada, where 19 CANDU PHWRs with a capacity of nearly 14 million kilowatts supply 15 percent of the country’s electricity.

But a new fuel developed in the United States by Clean Core Thorium Energy can increase that power and result in much less waste. The Advanced Nuclear Energy for Enriched Life, or ANEEL, fuel combines thorium (Th) with High-Assay, Low-Enriched Uranium (HALEU).

ANEEL fuel is important for another reason – it creates an early demand for HALEU, a material necessary for many of the new reactor designs, especially SMRs and fast reactors. This one reason that nuclear fuel supplier Centrus Energy Corporation is planning on being the first American commercial supplier of HALEU and could supply HALEU to Canada as well.

This is another great collaboration between Canada and the US This US-based fuel is ideal for the Canada-based CANDU and PHWRs. Also, getting Th used in reactors of any sort will facilitate those SMRs that will use thorium fuels in the future.