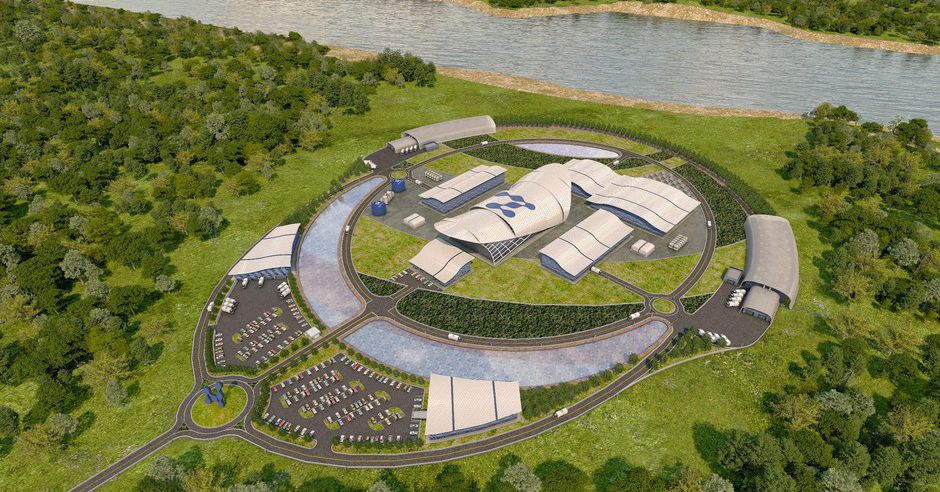 The way to tackle climate change and reduce emissions is through next-generation nuclear technology pursued by a coalition of public power producers in Utah via small modular reactors.

At least that’s the opinion of Edge, U2’s legendary guitarist, aka David Evans.

In comments made this month during a panel discussion for Dublin-based investment firm VentureWave and reported by Independent.ie in Ireland, Evans said that next-generation nuclear technology is key to meeting climate change goals.

“We have to open up to third generation nuclear energy, which is a possible solution,” he said.

The project will use small modular reactors developed by NuScale Power of Oregon.

NuScale’s design was the first next-generation nuclear technology to be certified by the U.S. Nuclear Regulatory Commission. The project is currently in the process of developing its building and operating permit, which is due to be submitted in 2023.

The planned modular reactors, which should start generating electricity in 2029, could ultimately deliver 720 megawatts of electricity from a 40 hectare site and provide the member cities and districts with stable base load electricity.

Each module can deliver 77 megawatts, and how many modules are used in the project depends on the number of participating utilities.

Webb said there are utility companies in the west and northwest interested in getting on board. The project continues to receive non-partisan support from Congress and is a priority for the US Department of Energy.

“UAMPS with NuScale is way ahead of any other SMR technology with design certification from the US Nuclear Regulatory Commission,” said Webb. “With concerns about climate change growing, we need to act quickly to reduce our carbon emissions.”

The project is not without critics concerned about the issue of nuclear waste management and costs that could prove to be too exorbitant for cities and future tariff payers. Some cities, such as Logan and Murray, opted out of the project after initially signing up.

But Webb said someone like the Edge will be included in the conversation about next-generation nuclear technology, which underscores its importance if countries are serious about cutting carbon emissions.

“Certainly people who are icons and followed by millions of people are important to their opinion,” said Webb.

“It’s good to hear someone like him address energy needs and the need to reduce CO2 emissions in a practical way.”

Diane Hughes, NuScale Power’s vice president of marketing and communications, said the company was pleased the rock star weighed in.

“NuScale welcomes this exciting support to the next generation nuclear industry as an efficient and safe way to meet global climate goals,” she said.

“As countries around the world turn their energy consumption away from greenhouse gas-emitting energy sources that exacerbate climate change, it is an important priority for us to build diverse support for the economic and environmental benefits of advanced nuclear facilities.”

Despite calling himself an “eternal optimist,” Evans said it was time to reconsider the broad pursuit of more solar parks and wind turbines.

“We need to think very carefully about whether our current renewable energy strategy will do this. We have to be ready to rethink certain things, ”reported the Independent.

“The impact on our country in terms of photovoltaic solar panels and windmills is so great that you need to devote yourself to these renewable resources. Is that really practical?”

According to Wind Energy Ireland, there are almost 400 wind farms on the island of Ireland that produce 5,510 megawatts of electricity. Solar development was much more limited due to the climate.

Webb said the guitarist and songwriter had a good point to make when it came to the land needed to use renewable energy.

“We are obviously very supportive of renewable energies,” he said, referring to a variety of renewable energy sources that the association owns. “But you have to be realistic about the amount of land that is needed if we want to get 100% wind and sun.”

Expanding renewable energies as directed by the Biden government has led groups like The Nature Conservancy to demand smart planning. Biodiversity needs to be protected and the importance of land protection cannot be overlooked, even if it is found that the amount of land required for renewable energies will be “substantial”.

The organization pointed to Princeton Net Zero’s report that it would require 228,000 square miles of wind and solar expansion – more than the states of Colorado and Wyoming combined.

For example, Webb’s group has a wind farm near Idaho Fall that sits on 20,000 acres and produces around 60 megawatts of electricity. The nuclear-powered zero-carbon energy project will occupy 40 acres in the Idaho National Laboratory.

“The footprint is just tiny, tiny compared to wind and sun,” he said.

The expansion of nuclear power in Ireland is banned and the country’s environment minister said there were no plans to re-examine the ban, according to the Independent.

The country has the third highest per capita emissions in the European Union, and a pro-nuclear advocacy group said using small modular reactor facilities – like NuScale’s – could cut carbon dioxide emissions by 36 million tons over 20 years Newspaper.

“Everyone thinks in terms of their election cycle and everyone is looking for an outcome now. We all have the power with our votes to enable politicians to think much longer-term. Thinking in the cathedral is really the way to describe it, ”he said.

“We need to encourage existing industries with a bad reputation to change so that we don’t make the good the enemy of the perfect.”