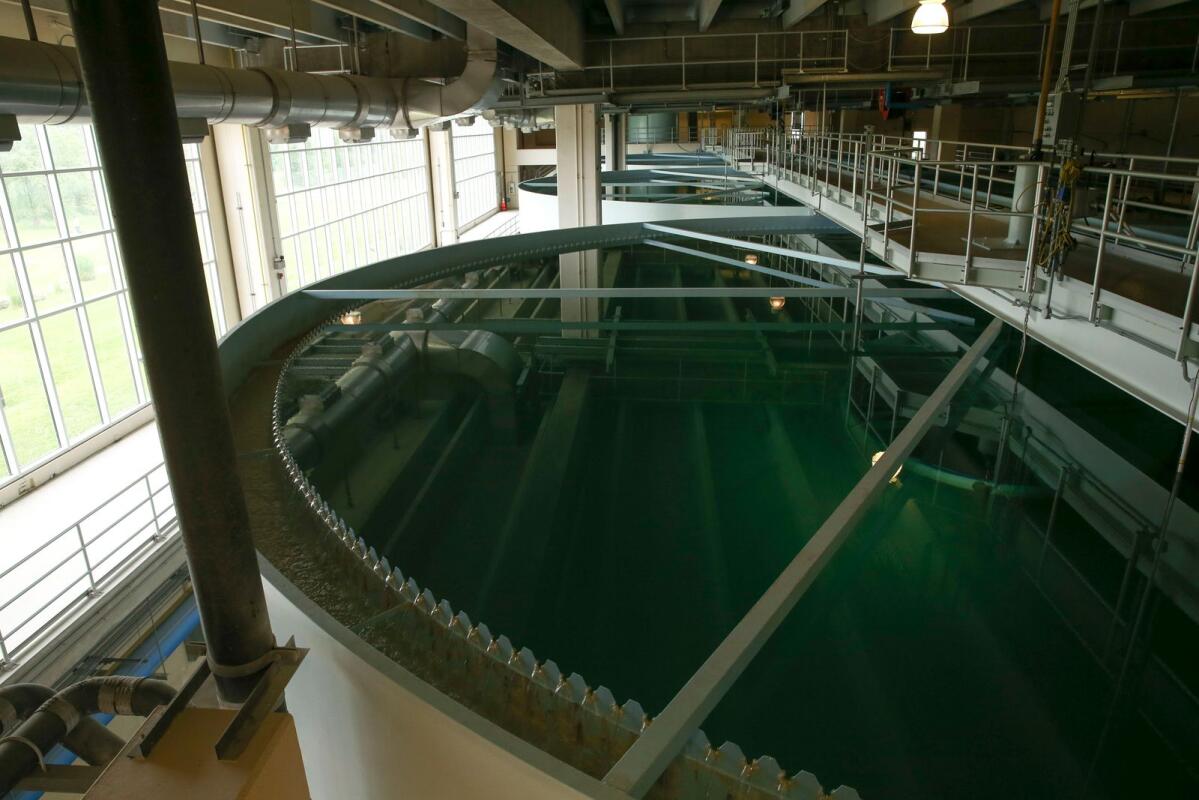 Tanks filled with water and a lime slurry used for raising the pH level are seen Tuesday at the water treatment facility in Iowa City. Iowa City bolsters natural fluoride in water to .7 mg per liter, which is the minimum the Centers for Disease Control and Prevention says is effective for preventing tooth decay. (Rebecca F Miller/The Gazette)

Fluoride standard solutions are used in the measurement of fluoride levels in treated water at the water treatment facility in Iowa City, (Rebecca F. Miller/The Gazette)

Large pumps, pictured Tuesday, distribute clean water to the east and west sides of the city at the water treatment facility in Iowa City. Iowa City bolsters natural fluoride in water to .7 mg per liter, which is the minimum the Centers for Disease Control and Prevention says is effective for preventing tooth decay. (Rebecca F Miller/The Gazette)

Tanks filled with water and a lime slurry used for raising its pH are seen Tuesday at the water treatment facility in Iowa City. (Rebecca F Miller/The Gazette)

Less than a century ago, it was unusual for a 30-year-old not to have dentures, according to Dr. Bob Russell, Iowa’s public health dental director.

A lot has changed in oral hygiene, but one of the most sweeping changes and one that helps poor and wealthy people alike is the fluoridation of drinking water. Boosting the natural fluoride in drinking water hardens the enamel on people’s teeth and makes teeth less vulnerable to cavities.

But an increasing number of communities — including cities in Iowa — have stopped adding fluoride to drinking water, possibly based on misinformation about how much fluoride people get from other sources. A new Iowa law that went into effect July 1 requires public water system operators to give residents at least a 90-day notice before they stop adding fluoride to drinking water.

“We had reports that communities had stopped fluoridation and had not informed their citizens or councils,” Russell said. When residents discovered the change and wanted to return to fluoridation, their water supply systems were required to upgrade to new state standards, which could be costly, Russell said.

“Our goal was we should alert our citizens these things are in debate and we should let them choose,” he said.

Starting in the 1930s, dentists observed people who drank water with naturally occurring fluoride seemed to have fewer cavities, the US Centers for Disease Control and Prevention reported. Scientists started researching fluoride, a mineral released from rocks, to try to find out if it could safely be added to water to protect people from tooth decay.

In 1945, Grand Rapids, Mich., became the first US city to add fluoride to drinking water. The move paid off when five years later researchers learned that Grand Rapids children had significantly fewer cavities than did children from surrounding communities, the CDC reported. Other US cities started adding low levels of fluoride to boost the natural levels to a standard set by the government.

The city has flow-controlled pumps, so if the water flow reduces, the fluoride feed slows down. Water operators test the raw drinking water and finished drinking water for fluoride every day. The city also sends a monthly water sample to the State Hygienic Laboratory in Coralville so the local tests can be verified for accuracy.

“Over the years I’ve had a number of phone calls from customers who wanted to talk about fluoride and argue about fluoride,” said Meacham, who has worked for the city’s water department for 31 years. “When I tell them it exists naturally and it’s proven by science to help tooth decay and that we carefully monitor the feed and don’t overdose, I think some people are reassured by that.”

If not, he tells them to “go talk to your dentist.”

For every dollar spent on community water fluoridation, $38 is saved in dental treatment costs, the state Public Health Department reported. Fluoride reduces cavities by at least 25 percent in both children and adults.

“What we’ve been learning quite clearly is there is an interface between medical and dental disease that drives up cases of morbidity,” Russell said. “As teeth get infected, that can get into the blood stream (into) the heart, lungs and many different systems.”

There are a variety of related conspiracy theories about fluoride, all revolving around the idea of ​​governments — including the Nazi regime — putting fluoride in water supplies to control the population, according to a 2016 article in Vice. Some of these theories say large corporations are in on it, making profits based on keeping people docile.

“There is this resistance to fluoride in drinking water and it’s mostly unfounded,” said David Cwiertny, a University of Iowa engineering professor and director of the Center for Health Effects of Environmental Contamination, which provides free testing for lead and other contaminants in school drinking water.

There are legitimate questions about how much fluoride should be added to water.

Fluorosis, a condition that can cause discolored teeth, can occur if people get too much fluoride, but severe cases of the illness are rare and “no evidence indicates that recommended levels of community water fluoridation lead to severe dental fluorosis,” the US National Institutes of Health reported.

There also have been concerns about fluoride hurting children’s bone growth. But a team of researchers, led by Steven Levy, a UI dentistry professor, found by tracking children from birth until age 25 that fluoride consumption did not affect their bone development.

“If science says we don’t need as much, you want to reduce it,” Russell said. “It’s a sign of transparency and honesty.”

About 20 percent of Iowa communities do not fluoridate water, Russell said. Since 2017, 15 Iowa communities totaling more than 25,000 residents have stopped adding fluoride to water, the state Public Health Department reported.

Ely, a Linn County city of 1,650, ended decades of fluoridation in 2020 at the recommendation of the water treatment manager, Mayor Eldy Miller said.

The Ely report overstates the amount of fluoride in toothpaste and uses as evidence a 2016 article in Harvard Public Health that was widely rejected by dental and pediatric organizations, some of which asked for the article to be retracted.

“We have not received complaints from the citizens since it has been removed,” Miller said. “We did receive complaints beforehand that fluoride was being added.”

The city of Tama, which has about 2,700 residents, stopped fluoridating water earlier this year based on a decision by Water Superintendent Kent Campbell, the Tama Toledo News Chronicle reported. The City Council decided April 5 to support Campbell’s decision, but at a June meeting several public health officials asked the council to reconsider.

Mayor Doug Ray told The Gazette the council still is collecting data and may reconsider the decision. “We haven’t ruled it out by any means,” he said.

Large tanks of water are filtered with 3-feet-thick granular activated carbon filters, which absorb volatile organic compounds from herbicides and other chemicals that may be present in water. Photographed Tuesday at the water treatment facility in Iowa City. (Rebecca F Miller/The Gazette)