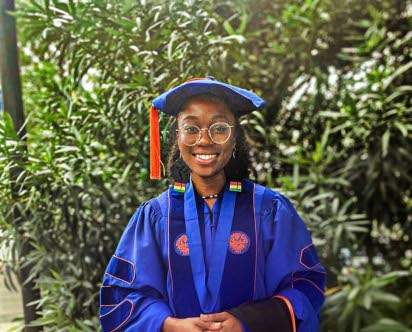 J’can is the first black woman to graduate from a 168-year-old university in nuclear engineering.

JAMAIKA’s Charlyne Smith, the first black woman to graduate in nuclear engineering from a predominantly white university in the United States, has her eyes fixed on the nuclear research reactor called Slowpoke at the University of the West Indies (The UWI).

Smith, who grew up in St. Catherine and is a former student of St. Catherine High School in Spanish Town, received her PhD from the University of Florida last month.

“Mi see! Wi nuh dun but wi Phinished! It is a great honor for me to be the first black woman to have a PhD in nuclear engineering from the University of Florida on Jamaica’s Independence Anniversary Day, ”the happy young woman tweeted afterwards.

Smith, who received her PhD on a scholarship from Coppin State University in Baltimore, Maryland, who graduated with degrees in chemistry and mathematics in 2017, was featured on HBCUbuzz online news site by Historically Black Colleges and Universities (HBCU).

Attributing her historic achievement to her grandfather, she said he inspired her to use her intelligence and drive to “make Jamaica a better place”.

“As a child in St. Catherine, Smith dreamed of becoming a scientist and inventor so that she could solve some of the fundamental problems faced by families like hers who had difficulty accessing electrical power and other reliable infrastructure.” said the news agency.

“She wondered why all 2.8 million people in Jamaica did not have access to electricity and clean water when they lived on a tropical island, so she decided to do something about it and focused her energies on solving the energy problem for them solve country and others like it, “added the news agency.

It is said that while at Coppin, Smith examined fruits with dark pigments to make dye-sensitized solar cells (DSSCs).

She discovered that this was not a viable route to providing third world countries with reliable energy in the near future, and after an initial meeting with a nuclear scientist – Dr. Nickie Peters – She switched from solar research to a career in the nuclear field. convinced that nuclear technology has the potential to bring about real change immediately.

She received a Graduate Research Fellowship from the National Science Foundation in 2018 to study at the University of Florida’s Department of Materials Science and Engineering, and has never looked back.

Smith also turned her gaze to her homeland and specifically to Slowpoke, the only nuclear research reactor in the Caribbean based at the International Center for Environmental and Nuclear Sciences (ICENS), which is primarily used for education and training rather than energy-related applications.

In 1984 the Jamaican government and the UWI, with the help of the European Union (EU), established ICENS to properly manage Jamaica’s nuclear research. The EU provided the facility with a 20 kW Slowpoke research reactor invented by Canada, with Professor Gerald Lalor as Director General. Dr. Lalor died recently.

Lalor believed that placing the reactor on a UWI campus would ensure researchers from other West Indian states have easy access to it for research purposes.

But despite the great ambitions of the department, a disaster occurred shortly after the reactor was commissioned at the Chernobyl nuclear site in Ukraine (then the USSR), resulting in bold plans to research the use of nuclear power in Jamaica.

Smith believes the reactor should be used to instantly improve access to reliable power on the island, and that once people are educated about the true potential of nuclear power, they will be less afraid of it and move on to a brighter future .

That was her reason for pursuing a PhD in nuclear engineering from the University of Florida, HBCUbuzz said, quoting her as saying, “To me, nuclear power is the obvious immediate solution, while renewable energy research takes some time to reach its maximum potential reach.”

Pointing out the severity of living conditions in Jamaica, Smith said the discrepancy between reliable energy available in the US and unreliable access to energy in Jamaica had motivated her to ensure that “the next generation of Jamaican children will not go a day without access.” clean water and reliable electricity ”.

She believes that renewable technologies like solar will benefit developing countries like Jamaica. Smith also believes that “every minute spent doing research that doesn’t directly improve the lives of families today just makes the problem worse”.

– Compiled by Kevin Wainwright and edited by Desmond Allen

Does Australia have the know-how to operate nuclear submarines? – cosmos