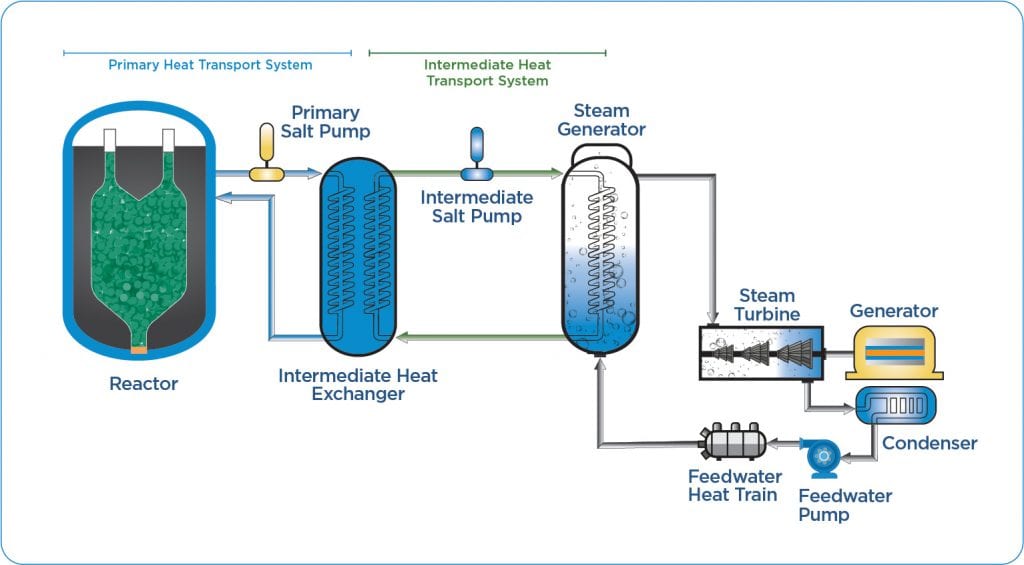 Kairos Power, an advanced nuclear reactor developer, has commissioned a molten salt purification plant (MSPP) that will produce “large quantities” of a high-purity coolant for reactors based on its fluoride salt-cooled, high-temperature reactor (KP-FHR ) technology.

The MSPP, one of the largest of its kind, is located at materials supplier Materion Corp.’s campus in Elmore, Ohio. According to Kairos, the plant will produce a mixture of lithium fluoride and beryllium fluoride salts ((2LiF-BeF2) known as “FLiBe” (or “Flibe”).

Chemically stable and capable of operating at low pressure, the liquid fluoride salts will be used to cool several test reactors that Kairos Power has planned as part of its pathway to commercialize a commercial-scale, 140-MWe version, dubbed the KP-X, the company said on July 19.

Producing Flibe Is a Crucial Advancement

KP-FHR technology essentially comprises a graphite-moderated, “randomly packed” pebble-bed reactor with a Flibe molten fluoride salt coolant. KP-FHR reactors are envisioned to operate at high temperature and near-atmospheric pressure. The fuel in the KP-FHR is based on tri-structural ISOtropic (TRISO) particle fuel in pebble form with a carbonaceous matrix coated particle design. “The fuel kernel and some of the coatings on the particle fuel provide retention of fission products. TRISO particles are dispersed within the graphite matrix of fuel pebble’s fuel layer,” the company has said.

“The reactor coolant is the chemically stable, low-pressure molten fluoride salt mixture, 2LiF:BeF2 (Flibe), with a boiling point of 1430C, notably lower than 1600C and yet functionally very high,” it added. “The combination of extremely high temperature-tolerant fuel and low-pressure, single-phase, chemically stable reactor coolant removes entire classes of potential fuel-damage scenarios, greatly simplifying the design and reducing the number of safety systems. The intrinsic low pressure of the reactor and associated piping, along with the functional containment provided by the TRISO fuel, enhances safety and eliminates the need for high-pressure containment structures.”

Since its founding in 2016, Kairos has sought to accelerate development of its technology through a “rapid iterative development approach.” The iterative approach is enabled by a vertical integration strategy” that leverages multiple design-build-test cycles with both nuclear and non-nuclear systems preceding the first commercial reactor, it said.

Kairos’s progress has so far focused on its Engineering Test Unit (ETU), a non-nuclear, unenriched Flibe-wetted, and isothermal integrated test that will take place at Kairos’s KP-Southwest research and development facility in Albuquerque, New Mexico, whose construction is nearing completion. Kairos intends for the ETU to demonstrate the design and integration of principal KP-FHR technologies, as well as accelerate its experience base of large-scale Flibe facility and initial plant operations.

Meanwhile, Kairos is also developing the Hermes “low power” demonstration, which will test a 50-MWth reactor based on the KP-FHR design at the East Tennessee Technology Park (ETTP) in Oak Ridge. Operation of the non-power reactor is tentatively scheduled for 2026. In the next KP-FHR development phase, Kairos intends to demonstrate the U-Facility reactor—a full-scale, non-nuclear “user” facility that will boost Kairos’s operations and maintenance experience. In April, Cairos assembled several North American utilities and power companies to advise on the development of KP-FHR technology, licensing, manufacturing, construction, and commercialization. The consortium, which includes Bruce Power, Constellation, Southern Co., and Tennessee Valley Authority, is expected to pool knowledge regarding the site and development of the U-Facility.

Flibe will be used in all these phases, as well as future commercial KP-FHR reactors. “By confirming the chemical process to produce Flibe at industrial scale, MSPP will help ensure the success of Kairos Power’s iterative hardware demonstrations, reducing risk in a critical path workstream for the commercialization of KP-FHR technology while delivering cost certainty,” Kairos said on Tuesday. 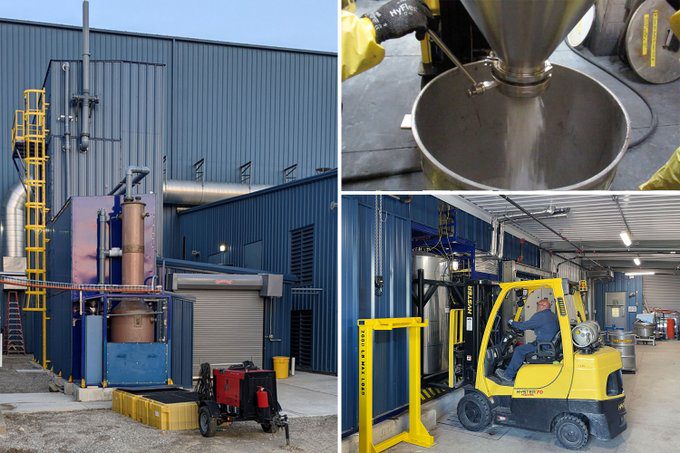 The company also appears confident in the MSPP’s ability to produce Flibe “that meets our nuclear specification for Kairos Power’s testing program at the scale necessary to supply our major hardware demonstrations,” added Ed Blandford, Chief Technology Officer and co-founder of Kairos Power.

The plant’s commissioning also notably marks a triumph for Materion. Materion, a notable producer and manufacturer of beryllium-based materials, will supply beryllium fluoride for the MSPP and contribute “requisite expertise staffing and operating the plant.”

The decision to site the MSPP at Materion’s campus in Ohio stems from a “long-term, strategic commitment by both companies to demonstrate leadership in molten salt production,” the companies said in a joint statement on Tuesday.

Alan Kruizenga, senior director of Salt Chemistry & Production at Kairos Power, noted that the MSPP’s production stems from a chemical process developed in Kairos Power’s Salt Lab. The plant’s design and process development has spanned more than a year, said Keith Smith, Materion vice president of Nuclear, Science, and Government Affairs. “This is the largest Flibe production facility ever built and has the capacity to generate commercial quantities of the material,” he added.