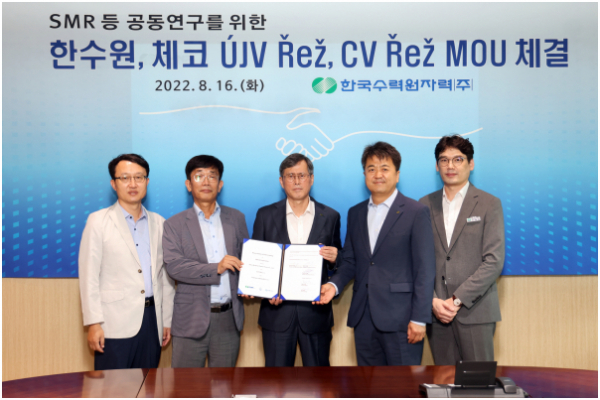 KHNP officials hold the MOU signed with UJV Rez and CV Rez of the Czech Republic after the online signing ceremony on Aug. 16.

UJV Rez provides comprehensive services primarily in the fields of applied research, development, and innovation in the utilization of nuclear energy and ionizing radiation sources, while CV Rez, a 100% subsidiary of UJV Rez, is a research organization focused on the areas of nuclear energy, nuclear reactors physics, chemistry and materials.

The MOU was signed online due to the COVID-19 situation.

Under the agreement, the three organizations plan to cooperate in various fields, including R&D, tests and certifications related to small modular reactors (SMRs) and the construction and operation of large nuclear power plants.

KHNP believes that its cooperation with the two Czech research institutes will provide a basis for the Korean nuclear power industry to further advance into Eastern Europe.