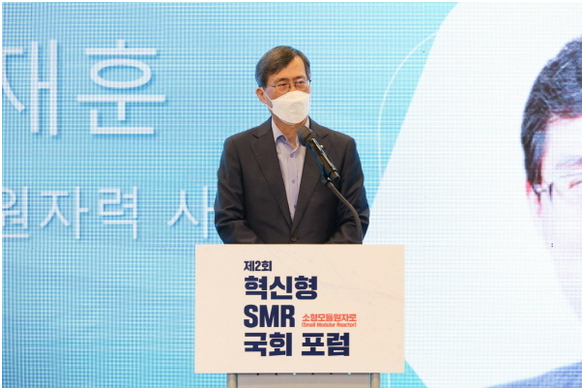 Chung unveiled KHNP’s SMR plan during the second conference of the National Assembly’s innovative SMR forum organized by KHNP and the Korea Atomic Energy Research Institute. The parliamentary forum is jointly chaired by Lee Won-wook, a member of the Democratic Party and Kim Young-sik, a member of the People Power Party.

Attendees at the meeting talked about progress in the SMR development project, successful development strategies for the project, and creating an environment for SMR technology export. They also exchanged views on the role of innovative SMRs in exporting nuclear power plants and revitalizing the nuclear power generation ecosystem.

“The National Assembly and the government will work together to provide continued support to make the innovative SMR technology development project a great success,” said MP Lee Won-wook.

“I will do my best to ensure that the currently audited Preliminary Feasibility Study is passed and that an innovative SMR can be developed in a timely manner,” added Rep. Kim Young-sik.

SMRs are not only a new growth driver for the nuclear industry, but also have enormous growth potential as future energy producers, so that the competition for the development of SMRs is intensifying worldwide.

Korea is also developing an innovative SMR with significantly improved economy, safety and innovation by retrofitting the system-integrated Modular Advanced ReacTor (SMART) under the leadership of KHNP and the Korea Atomic Energy Research Institute. SMART received Standard Design Approval in 2012. The two organizations aim to obtain licenses in 2028 and then seriously enter the nuclear power plant export market.