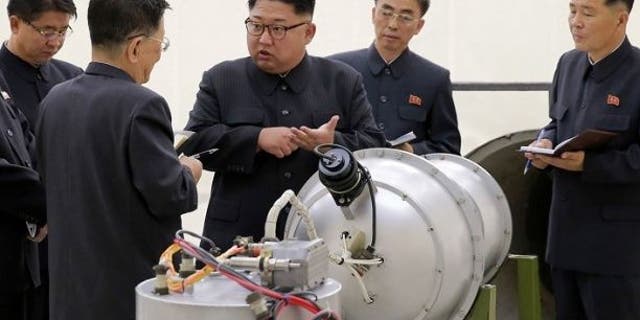 SEOUL, South Korea – In his speech for the 69th anniversary of the armistice of the Korean War on Wednesday, Kim Jong Un warned Seoul and Washington that his country’s nuclear war deterrent is ready to mobilize to complete its unspecified mission.

“Our armed forces are fully prepared for any military conflicts with the US,” the North’s state-controlled media KCNA quoted Kim as saying.

Kim also accused the US of “demonizing” North Korea to justify its hostile policies while criticizing the upcoming US-South Korea joint military exercises as an example of its double standards, as it is banned to test and develop nuclear and ballistic missile programs.

A day before Kim’s address, White House National Security Council spokesman John Kirby said he was not in a position to confirm the timing of the North’s nuclear test, but that the US “would react appropriately, along with allies and partners,” in case of look for a test.

The Office of National Security in South Korea expressed “deep regret” toward Kim’s criticism of Yoon and reiterated that “the government urges Pyongyang to come up to the path of dialogue for denuclearization and peace construction.” The White House has yet to comment.

Although experts believe it’s just a matter of time before North Korea conducts its seventh nuclear test – which would be its first since September 2017, there are still obstacles for Kim Jong Un to carry out a nuclear test.

Since the COVID-19 outbreak began in North Korea in May, its missile tests have died down. Although satellite imagery of the North’s Punggye-ri nuclear site indicates that Pyongyang has been steadily restoring tunnel 3 of the nuclear site, no public remarks or reports about the nuclear test have been made.

Kim Jong Un pictured in September with what appeared to be a nuclear device after the hermit kingdom’s sixth nuclear test.
(KCNA via Reuters)

In front of invited foreign journalists, the Punggye-ri nuclear site was blown up in May 2018 in an effort to have a summit meeting with President Trump. However, as Pyongyang did not allow outside experts to witness the explosion of the site, it was impossible to verify its demolition.

According to its own data of confirmed cases of “fever” patients and deaths related to COVID-19, North Korea has claimed to have successfully contained the pandemic.

Given the country’s unreliable reporting system on the Coronavirus and deaths, it is believed that the COVID-19 outbreak has impeded Pyongyang’s plan to carry out a nuclear test during the US-South Korea-Japan trilateral summit meeting in Madrid last month or on Independence Day .

Adding to the delays has been bad weather that exacerbated food shortages while the country lacks the medical know-how to treat patients. However, some experts believe the main reason for Pyongyang delaying its nuclear test boils down to Chinese opposition.

WHAT DOES NORTH KOREA’S KIM JONG UN WANT FROM THE BIDEN ADMINISTRATION?

The North’s fifth nuclear test was conducted in September 2016, when Kim Jong Un and Xi Jinping had intense disagreements. In the early years of Kim Jong Un’s era, he rejected Beijing’s demand not to test missiles and nuclear tests several times, one of the main reasons for the worsened relations between the two.

Yet, as bilateral relations between China and North Korea improved following a summit between the leaders in 2018, combined with the North’s desperate need for China’s help to ease the devastating state of the economy caused by Kim’s aggressive anti-pandemic measures and economic sanctions, North Korea is unlikely to turn a blind eye to China’s pressure. 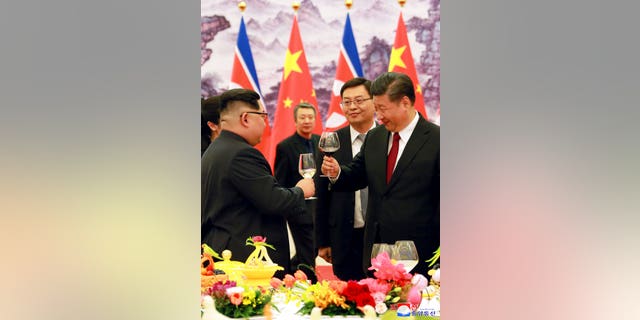 Xi Jinping and Kim Jong Un meet for the first time. Relations between the two have improved since their first meeting in 2018.
(KCNA via KNS)

According to Cheong Seong-chang, director of the Center for North Korean Studies in the Sejong Institute in South Korea, North Korea wants to resume trade with China by facilitating trade through the two countries’ extensive train networks, but he said “that won’ t happen until the 20th National Congress of the Chinese Communist Party,” due to the Covid-19 outbreak in North Korea.

In January, North Korea’s cargo trains headed to China to get shipments for the first time since the borders were sealed due to Kim’s anti-pandemic measures in early 2020.

“The resumption was short-lived due to COVID hitting the North, and the only trade that is presently happening is through cargo ships, albeit it at a much smaller amount,” Cheong said

“It is expected that North Korea will refrain from conducting a nuclear test or test-fire its ICBMs until the end of the 20th National Congress of the Chinese Communist Party as it needs to resume trade through train with China to at least meet its economic plan for this year partially,” Cheong added.

He also noted that “China is worried about South Korea deploying more US THAAD anti-ballistic missile defense systems on its soil after the North’s nuclear test.” 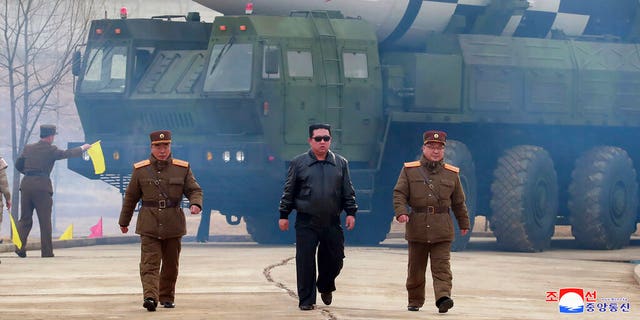 In this photo distributed by the North Korean government, North Korean leader Kim Jong Un, center, walks around what it says is a Hwasong-17 intercontinental ballistic missile (ICBM) on the launcher at an undisclosed location in North Korea March 24, 2022.
(Korean Central News Agency/Korea News Service via AP)

At the third Enlarged Meeting of the Eighth Central Military Commission of the Workers’ Party of Korea last month, Kim discussed “additionally confirming the operational tasks of the front-line units of the Korean People’s Army” and “revising operational plans according to the military strategic plan of the party,” the North’s state-controlled media, KCNA reported.

The meeting came two months after Kim publicly said his nuclear programs “can never be confined to the single mission of war deterrent” at the military parade to celebrate the 90th anniversary of the founding of the Korean People’s Revolutionary Army on April 25.

If North Korea successfully tests the miniaturized nuclear warheads, they will likely be deployed in the front-line units of its army on the basis of what was discussed during the meeting last month.

North Korea had made clear that the purpose of developing nuclear programs is for deterrence, not for targeting other countries. However, Kim’s remarks have demonstrated that nuclear weapons could be used as a preemptive measure when necessary. 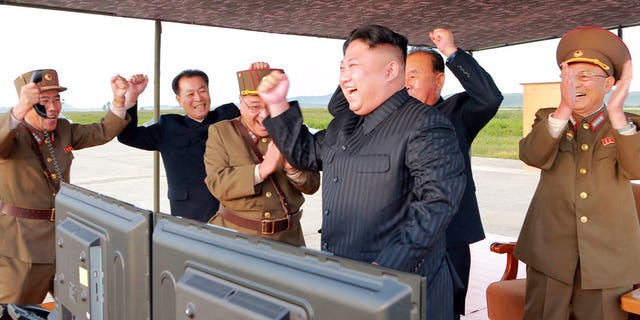 In this undated photo provided by the North Korean government, leader Kim Jong Un celebrates what is said to be the first successful test launch of an intermediate rank Hwasong-12 missile.
(AP Photo/Korean Central News Agency)

North Korea has normally conducted nuclear tests in the lead up to, or after significant anniversaries, such as the birthdays of the leaders of the founding anniversary of the party and the government.

NORTH KOREA CLAIMS NEAR VICTORY OVER COVID, WHO CASTS DOUBTS ON CLAIM

Considering the North’s choice of the date for a nuclear test, potential timelines for such a nuclear test could be around Sept. 9, the 74th anniversary of the national founding, or Oct. 10, the 77th anniversary of its ruling Workers’ Party, Cheong said. That timeline could be changed as the 20th National Congress of the Chinese Communist Party is set to convene in October.

An unofficial visit by South Korea’s chief of national intelligence to Washington last week and the scheduled meetings between the US and South Korean Defense chiefs could be interpreted that they have detected clear signs of Pyongyang preparing for a nuclear test.

In the meantime, North Korea may likely resume testing ballistic missiles as a response to the US-South Korea joint military drills scheduled next month.

Mitch Shin is a Seoul-based reporter for Fox News Digital. He can be followed on Twitter @MitchShin5

No fluoride in Wellington’s water for more than a month