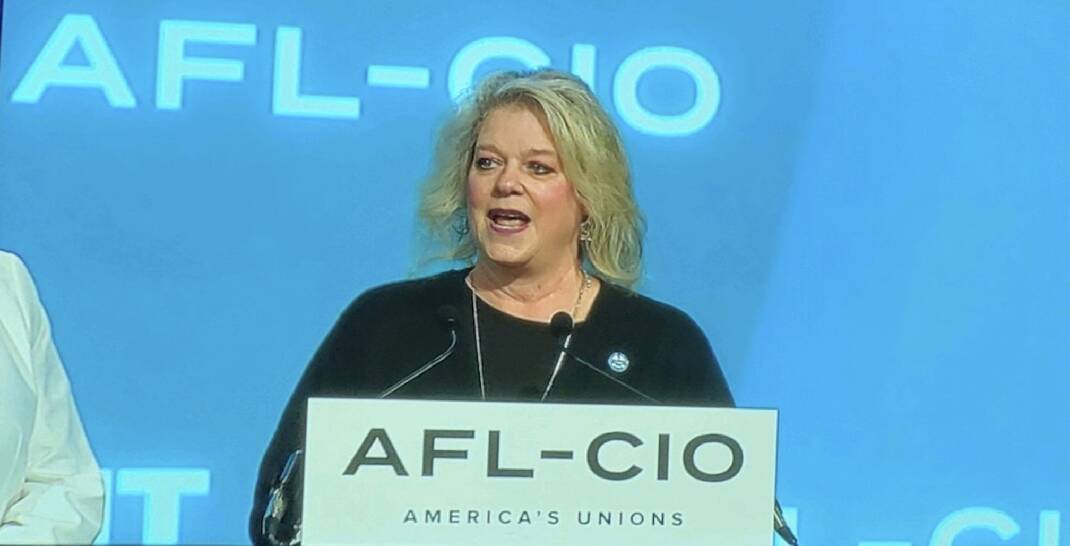 America’s biggest labor union urged President Joe Biden on Tuesday to allow the Tennessee Valley Authority to qualify for federal grants to aid in the development of new nuclear technologies, including small modular reactors the federal utility wants to build in East Tennessee.

Shortly after hearing a speech from Biden at his convention in Philadelphia, the AFL-CIO approved the resolution urging the White House to open up federal grants to government utilities like TVA that aren’t able to apply and qualify for some grants and tax credits available for investor-owned utilities.

“Although TVA operates as a self-funded electric utility, certain federal grant programs that should have been available to the TVA have excluded the authority from eligibility,” the labor federation said in the resolution unanimously approved by delegates during the AFL-CIO’s 29th Constitutional conventional. “Most recently, the Department of Energy awarded grants for the construction of modular nuclear reactors but, based on past precedent, did not consider TVA as an eligible grantee.”

In 2020, the DOE awarded two, $80 million grants for small modular reactors. TerraPower is using its grant to demonstrate the sodium reactor, a sodium-cooled fast reactor. X-energy plans to deliver a commercial four-unit nuclear power plant based on its Xe-100 reactor design with its grant.

However, the department did not fund TVA’s proposed GE Hitachi-designed small modular reactor proposed in Oak Ridge even though TVA has the only Nuclear Regulatory Commission-approved site for one of the small reactors.

As a government-owned utility, TVA is also not eligible for tax credits offered for the development and building of new nuclear power plants.

Chattanoogan Gay Henson, the secretary-treasurer for the International Federation of Professional and Technical Engineers, appealed to AFL-CIO delegates to support TVA and federal funding for the development of small modular reactors, which she said can be built quicker and cheaper than traditional reactors and “are the future of the nuclear energy industry.”

“The Department of Energy has recognized this fact by creating grants to support the construction of these new SMRs,” Henson said during a convention speech in Philadelphia. “Unfortunately, due to a misunderstanding of TVA’s function and purpose, the DOE has stated that TVA is not eligible to apply for these and other similar grants.”

Henson, a former health physicist at TVA’s Sequoyah Nuclear Plant, said including TVA in federal grant programs “would help ensure those new modular reactors were built and operated by union workers who are federal employees.”

(READ MORE: TVA is ahead of most utilities in carbon cuts, but growing economy slices share of clean power)

TVA, which was created in 1933 as part of President Franklin Roosevelt’s New Deal, received appropriated funds from Congress every year until 1999, helping to develop fertilizers and energy technologies while also providing flood control, navigation, recreation and economic development in its seven-state region.

But for the past 23 years, TVA has been entirely self-funded by its electric rate payers.

TVA makes in-lieu-of-tax payments to local governments because it doesn’t directly pay property or sales taxes, but the federal utility does not pay any federal income taxes, which are paid by investor-owned utilities like Southern Company or Progress Energy.

Henson said TVA has been unionized since 1937 and has 17 AFL-CIO affiliate unions representing about 60% of TVA’s roughly 10,000 employees.

“TVA’s partnership with unions stretches back to its earliest days and, working together, we have built the largest public power system in the nation, offering reliable energy and preserving natural resources while creating economic opportunity throughout our region,” TVA Chief Operating Officer Don Moul said in a statement Tuesday in support of the AFL-CIO resolution. “We believe that advanced nuclear technology is needed … and partnerships with the federal government, other utilities and like-minded organizations are necessary to ensure such development is completed rapidly while minimizing the financial risks associated with new technology.”

AFL-CIO representatives said they hope the changes to include TVA in future federal grants will be made by the White House through executive orders that won’t require new legislation. But union leaders said there was no immediate response to their resolution from the Biden administration.

TVA has allocated up to $200 million from its own budget to study the feasibility of building new small modular reactors on the Clinch River in Oak Ridge, but TVA President Jeff Lyash said in a previous interview he hopes the Department of Energy, General Electric and others will help share in the research and development expenses for the new reactor design.