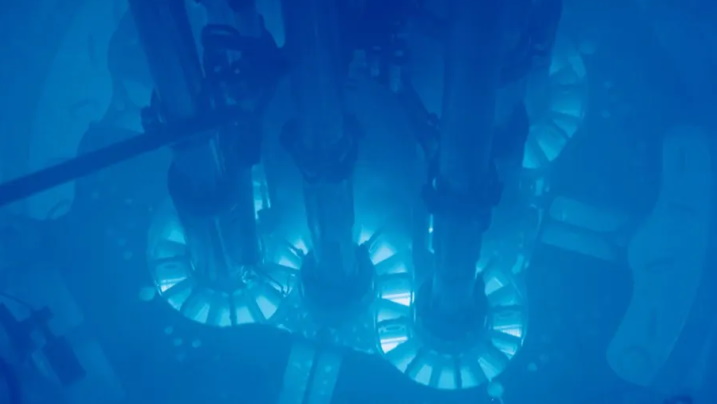 Lightbridge fuel is getting closer to irradiation tests: Uranium & Fuel

Lightbridge Ltd has completed work on the design of an experiment to irradiate samples of its metallic fuel in the Advanced Test Reactor (ATR) at Idaho National Laboratory (INL). The work was carried out in collaboration with the INL as part of the US Department of Energy’s Gateway for Accelerated Innovation in Nuclear (GAIN) voucher program and marks a milestone in testing the material in the reactor.

The blue glow of the Cerenkov radiation in the ATR of the INL (Image: INL)

As part of the work, teams from Lightbridge and INL created a test plan for measuring the most important thermophysical properties of Lightbridge fuel material before and after irradiation in the ATR. INL carried out a detailed design and created the proof of safety required to bring the experiment into the reactor, including the control of parameters such as sample enrichment, thermal-hydraulic capacity, maximum sample temperature, neutron fluence and the physical position of the test capsules within the ATR.

Seth Grae, President and CEO of Lightbridge, said this is “the design and proof of safety” for Lightbridge fuel samples to be tested in the ATR. “I would like to thank the teams at Lightbridge and the Idaho National Lab for their joint efforts under the truly unprecedented conditions of a global pandemic to complete this important work. I would also like to thank the Department of Energy and the GAIN program for their continued support of advanced nuclear technology research at Lightbridge, “he said.

The next step will be to sign a contract for the low-enriched, high-grade uranium material and manufacture the sample coupons for inclusion in the ATR, the company announced yesterday. “Lightbridge’s goal is to have the experiment available to insert into the ATR when the maintenance downtime of the internal replacement of the core has been completed obligations for testing,” it added.

The GAIN initiative was launched by the US Department of Energy (DOE) in November 2015 to provide an opportunity to accelerate nuclear innovation and provide stakeholders with access to a DOE research and development infrastructure to help them address the challenges to support the introduction of new technologies towards a demonstration on a technical scale.

Test reactors such as the ATR and the DOE’s proposed Versatile Test Reactor are critical to the development of advanced nuclear fuel technologies and materials. ATR is a test reactor for thermal neutrons that was first put into operation in 1967. It operates at very low pressures and temperatures compared to a large commercial nuclear power plant, and its testing capabilities are used by the U.S. military, federal agencies, universities, and industrial partners and customers.

Crypto in the crosshairs: US regulators look to the cryptocurrency sector – Cointelegraph