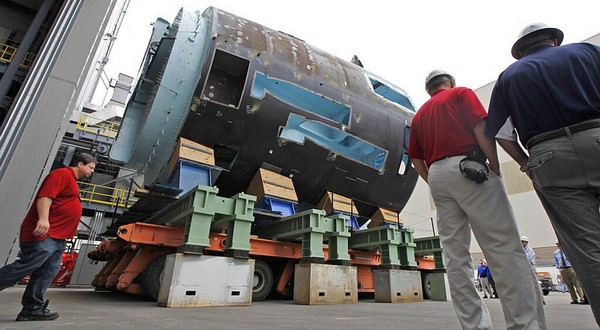 The event at defense firm HII’s Newport News Shipbuilding yard in Newport News, Va., marked the final construction phase for the Virginia-class nuclear submarine. The Navy announced the vessel’s name in 2015, and crews began construction in 2018.

The women of the Little Rock Nine — Melba Pattillo Beals, Elizabeth Eckford, Gloria Ray Karlmark, Carlotta Walls LaNier, Minnijean Brown-Trickey and Thelma Mothershed Wair — were named the submarine’s sponsors in 2018 to recognize their contributions to civil rights through the 1957 integration of Little Rock Central High School. The Navy has traditionally selected females to serve as ship sponsors; their responsibilities will include commissioning the warship for active use and interacting with crew members.

All nine Little Rock Nine members — including male members Ernest Green, Terrence Roberts and the late Jefferson Thomas — were honored during Saturday’s event. Shipbuilders welded the initials of Green, Eckford, Karlmark, LaNier, Wair and Brown-Trickey onto steel plates, which crews will place onto the submarine as construction continues in the new year.

“The bravery and resilience of the Little Rock Nine sparked a fire of change and demonstrated the strength of blending different perspectives and backgrounds,” Jennifer Boykin, the president of Newport News Shipbuilding, told ceremony attendees. “We harness this strength in our shipyard every day because our diversity allows us to extend beyond our individual limits, to reach new heights and to build each boat better than the one before.”

The Arkansas is the 27th Virginia-class submarine and follows the delivery of the USS Montana and the USS New Jersey’s launch. The Navy plans to introduce two new submarines each year to its active fleet as other vessels are retired.

The submarine is the fifth vessel to bear the state’s name. The previous one — the cruiser USS Arkansas — is connected to the same Newport News shipyard. The cruiser’s keel ceremony took place at the site in January 1977. The Navy commissioned the vessel in October 1980 and decommissioned it in July 1998.

He continued, “That cruiser Arkansas protected us against the Soviet Union. Now, the USS Arkansas — when it’s commissioned — will protect us against any adversaries.”

According to Houston, the submarine Arkansas can be utilized for 30 years once it becomes an active vessel.

Eckford, who served five years in the Army, said she hopes the submarine helps the military “keep the peace.” She reflected on how the honor added to the list of recognitions the Little Rock Nine have received.

“It has been 65 years since we were in high school, but in our latter half of our lives, we’ve had some very, very unique experiences,” she added.

#LoveMySafranJob – At the heart of the reactor of the future: the engine test technician