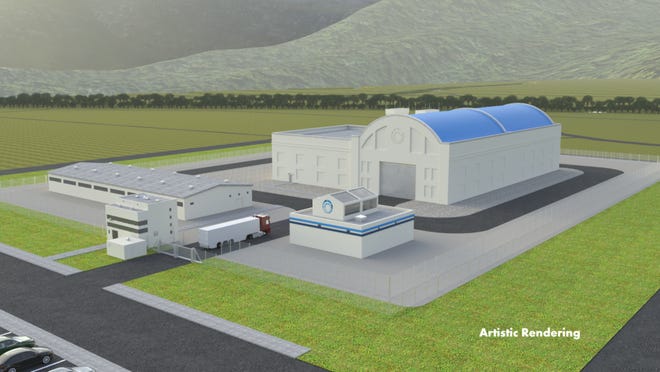 The Hermes reactor will not produce electricity, only heat. Nevertheless, technologies are being tested and demonstrated that can work for future power plants. It will be located on the former K-25 property, specifically on 10 acres in the K-33 area. The company hopes to start building the test reactor in 2023. It hopes to have it operational by 2026.

Mike Laufer, Co-Founder and CEO of Kairos Power, explained these details in a virtual meeting on September 28th. He hopes to have working reactors using the company’s technology to generate electricity by 2030.

Laufer said his goal is to show that there is a way to generate nuclear power inexpensively.

“It’s clean. It’s safe. It’s reliable. But it’s not really affordable,” he said of the current nuclear technology. He said he wanted it to be competitive with natural gas.

The Hermes reactor will be a fluoride-salt-cooled high-temperature reactor. Laufer said his company’s only goal is to make these types of reactors commercially successful.

“We are only focusing on one technology that we are trying to get to market and develop as quickly as possible,” he said.

In his presentation, Laufer stated that his company’s mission is to “enable the world to transition to clean energy” while improving people’s quality of life and protecting the environment.

“This is a very exciting time for us in the nuclear reactor industry,” she said.

She said the role of nuclear energy in curbing possible climate change is increasingly recognized. She also told the people in the virtual audience that she spoke to US Secretary of Energy Jennifer Granholm about the Hermes reactor.

A recording by Lt. Gov. Randy McNally, R-Oak Ridge, was played for the virtual audience.

“Oak Ridge is the center of our nuclear community,” he said. “I know Kairos will be a strong part of our ongoing success story in Oak Ridge.”

Another recorded message to the virtual meeting came from Ron Woody, the executive director of Roane County.

“We know this investment is a big step for Kairos,” he said. “We are ready to help you with energy development in this next generation.”

“After many years of demolition and cleaning, we are good to go,” said Watson of the former K-25 site. He called Kairos the “first major tenant” for the site after the days of the K-25 system.

Contractors have demolished many buildings on the former K-25 site, some of which date back to the Manhattan Project.

What about the airport?

Watson and the city helped develop an airport on a different part of the former K-25 site. During the virtual conference, Watson promoted the airport as it allowed people to quickly get to Oak Ridge to see the reactor.

When asked, Laufer said that the future airport would neither positively nor negatively affect his company’s reactor. He said the airport and reactor cannot proceed without studies showing that there is no negative impact on the environment when the reactor and airport are close together.

He said the airport will allow “there and back” travel from the website. However, he said these private flights were expensive and inefficient for his business to run.

Ben Pounds is a reporter for The Oak Ridger. Call him at (865) 441-2317, email him at [email protected], and follow him on Twitter @Bpoundsjournal.