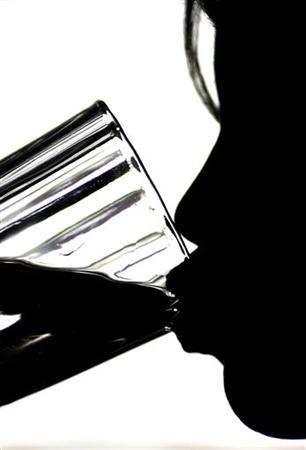 Many Americans still do not get fluoridated water

WASHINGTON (Reuters) – Water systems that supply about 30 percent of Americans are not giving them fluoridated water six decades after fluoridation began as a public health measure to prevent tooth decay, officials said Thursday.

A girl is silhouetted as she drinks a glass of tap water at her home in Loughborough, Central England on December 2, 2004. REUTERS / Darren Staples

The United States Centers for Disease Control and Prevention welcomes the reduction in tooth cavities due to the addition of fluoride to public water supplies as one of the top ten public health achievements of the 20th century.

Most Americans get their water from local or regional communal water systems. A new CDC report showed that as of 2006, 69 percent of people in the United States who obtain water from these systems were receiving fluoridated water, up from 65 percent in 2000 and 62 percent in 1992.

“This is one of those dirty little secrets – that the whole nation has not yet embraced fluoridation of water, which has tremendous public health benefits,” said Dr. Georges Benjamin, executive director of the American Public Health Association, in a telephone interview.

Fluoridation of public water supplies was introduced in Grand Rapids, Michigan in 1945.

“It is still an underutilized, very effective public health measure,” said Dr. William Bailey of the CDC Oral Health Division, who ran the report, in a telephone interview.

Some major cities still don’t fluoridate their water supplies, including: San Diego; Portland, Oregon; Honolulu, Hawaii; and Wichita, Kansas. San Diego has pledged to begin fluoridating its water in May 2010.

In California, the most populous of the 50 US states, only 27 percent of people served by municipal systems were receiving fluoridated water as of 2006, according to the CDC. Only Hawaii (8 percent) and New Jersey (23 percent) were lower.

Fluoridation remains controversial for some people. Some opponents in the 1950s denounced it as a communist conspiracy, derided in 1964 director Stanley Kubrick’s Cold War satire: “Dr. Strangelove or: How I learned to stop worrying and love the bomb. “

Current opponents argue that adding fluoride to water can cause health problems such as weak bones and bone cancer, a claim the CDC rejects.

When asked if there is any responsible evidence of negative health effects from fluorinated water, Bailey said, “No, not at the level we use in municipal water systems.”

“Most people are complacent about the problem because they naturally assume they live in a city that is fluoridated,” said Bailey.

In water treatment plants, fluoride is added to water – either in powder or liquid form – usually in amounts of about one part per million, Bailey said.

The government’s goal is for 75 percent of US residents in community systems to have fluoridated water by 2010.