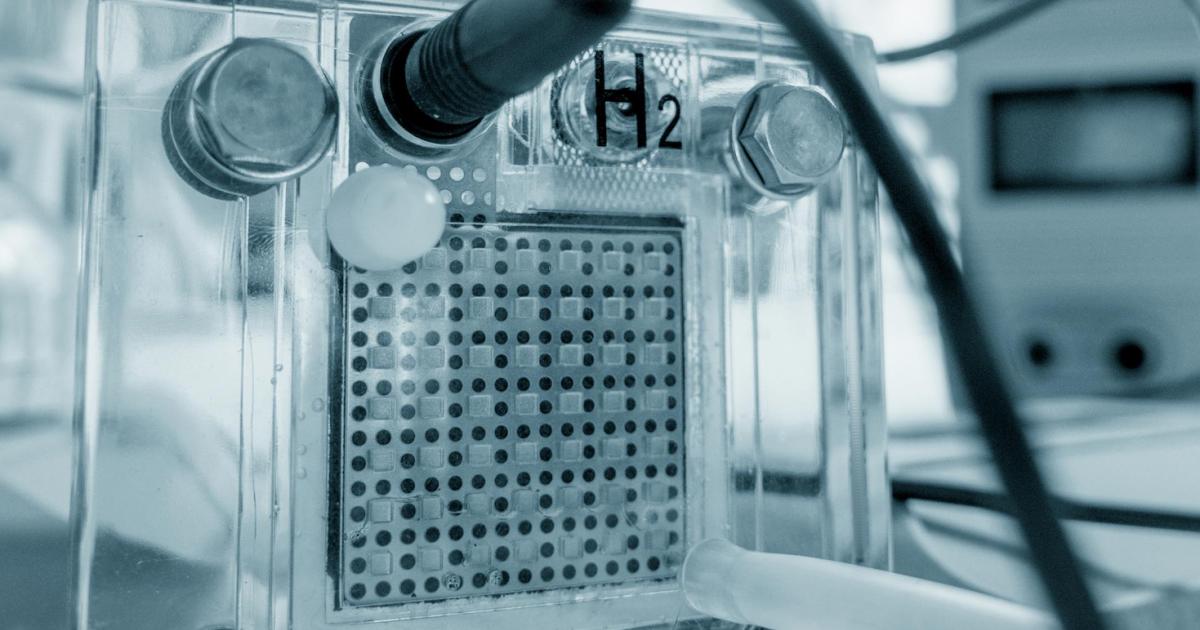 Ammonia, or NH3, is familiar to most as a household cleaning product. Currently, its main industrial use is to safely and cheaply transport much needed nitrogen to fertilizers. But Amogy believes it can redefine the compound chemical as a sustainable fuel for the transportation sector by pairing it with new power-generating technology.

“We’ve developed a compact system,” said Amogy CEO and co-founder Seonghoon Woo, “consisting of a chemical reactor [called cracker] and hydrogen fuel cell.” To generate energy from ammonia in a liquid state, Amogy’s technology cracks the compound itself, separating the hydrogen into the fuel cell and expelling the harmless nitrogen. (Nitrogen emissions become toxic when released as NO2 but remain benign when isolated Amogy’s solution requires only a new engine, not creating a new type of fuel, according to the company.

There is a global push for emission-free hydrogen fuel (it is important to note that this is not the same as green hydrogen, a term that implies the hydrogen itself was created using renewable energy supported electrolysis), as hydrogen doesn’t emit any harmful chemicals when burned for energy.

However, use of the element is hindered by its difficult requirements for transportation. Dave Mullaney, a leading member of RMI’s Carbon-Free Mobility Team, explained the difficulty of transporting hydrogen alone. “Hydrogen is a very uncooperative thing to be carried around,” he said, citing its small and light physical aspects and propensity to leak from containment. To convert the gas into liquid, Mullaney told me that hydrogen “only gets to liquid at very close to absolute zero,” a process that requires tremendous amounts of infrastructure and energy.

Ammonia is a good way to move and store hydrogen.

By comparison, ammonia in its liquid form is easy, inexpensive and safe to move, making it the perfect vector for an of end-game hydrogen fuel, according to Woo.

But move to where? Specifically, Amogy plans to begin with providing fuel to the maritime sector, working with cargo fleets across the globe to begin the transition from dirty to clean energy generation. Crucially, ammonia is an internationally traded commodity, with a global production volume of around 200 million tons per year and pipelines already constructed. That ensures shipping ports possess the infrastructure necessary to store and transfer the liquid aboard ships.

Woo emphasized the convenience, stating, “[Since] people have been shipping ammonia as a cargo… there are infrastructures available, and luckily, there are 200 ports around the world.” With maritime fleets as its first target, Amogy aims to demonstrate its technology’s ability to support the energy needs of cargo ships in an emission-free manner.

But, is this technological goal feasible or is this an unachievable venture that allows oil refineries such as SK Innovation and Saudi Aramco to greenwash their investment portfolio? RMI’s Mullaney answers a tentative yes to the former, citing an existing study from Northwestern University that also successfully produced ammonia-cracking reactors and hydrogen fuel cells. The lead author of the study cites the transportation sector as an especially promising path forward, highlighting the significant cut to emissions that would follow the integration of ammonia-based reactors and fuel cells.

“Ammonia is a good way to move and store hydrogen,” Mullaney said, “and if Amogy can capture the best attributes of both hydrogen and ammonia, it could provide a pathway to decarbonize major parts of the global trade network.” Praising the ingenuity of the technology, Mullaney expressed interest in the future rollout of the full-scale mechanism.

Mullaney’s excitement echoes that of many in the sustainable transport and energy space. The decarbonization of the global transportation sector is a hot topic, given its release of a whopping 1.8 billion metric tons of CO2 in 2021. EV cars dominate the headlines, but industrial cargo fleets, responsible for transporting 90 percent of traded global goods, are often overlooked, and battery power alone isn’t enough to support a cargo ship across an ocean.

The $46 million in funding will allow Amogy to scale up its technology. Whether cracking ammonia is suitable for trucks and aviation, the next step in Amogy’s long-term timeline, is still up in the air. Mullaney cites the efficiency and rapidly evolving market of battery-powered engines, along with the heat required to crack ammonia into the hydrogen necessary to power an electric engine. In confined spaces such as 18-wheeler trucks and commercial aircraft, heating a chemical reactor to at least 500 degrees Celsius is dangerous, once again making the shipping sector the ideal place to start.

Amogy’s innovative technology, coupled with the benefit of existing infrastructure, positions its reactor and fuel cells as one logical next step in the sustainable transportation sector. Funders with a vested interest in reducing GHG emissions in global trade, such as Amazon, certainly agree, positioning Woo’s goal of “100 percent sustainable fuel starting from 2025” in shipping fleets to become a potential reality. I, for one, am eager to see Amogy’s next move.