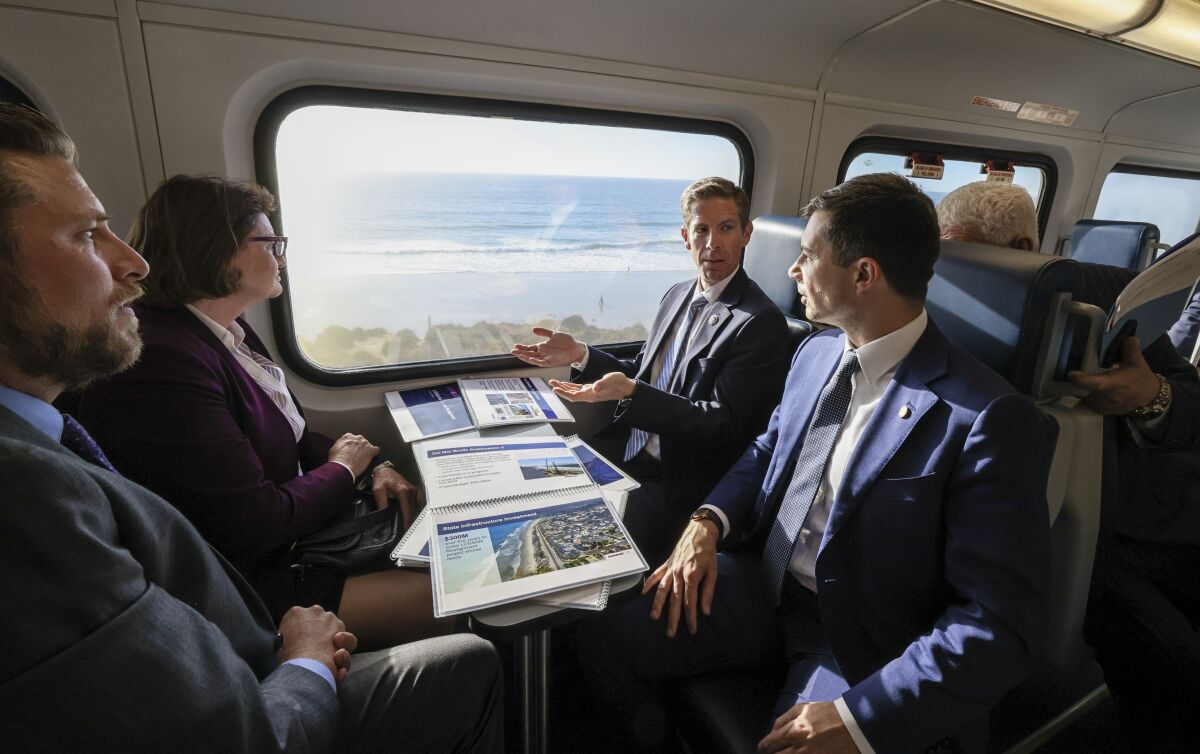 After winning a fiercely fought re-election race for a swing district spanning San Diego and Orange Counties, Rep. Mike Levin aims to reopen the shuttered coastal rail line that runs through his district, to find a permanent storage site for nuclear waste from San Onofre and to tackle veteran housing and employment.

The third-term Democrat spoke with the San Diego Union-Tribune for a series on the legislative goals and accomplishments of San Diego-area members of Congress.

Last year, Levin sponsored bills expanding veterans’ benefits and planning for disposal of spent nuclear fuel from San Onofre Nuclear Generating Station. He said he will reintroduce those that didn’t make it to votes last year.

With the new Republican majority in the House, Levin said he sees opportunities to address veterans’ affairs, local infrastructure, coastal erosion and other issues this session.

“My focus will continue to be what it has been, which is to continue to work with folks across the community, and work across the aisle,” Levin said.

“I will hopefully be able to find like-minded Republicans to work on reducing wait times for VA appointments, ending veteran homelessness, improving transition to civilian life.”

Last year, Levin worked with Rep. Chip Roy, R-Texas, to pass legislation to boost life insurance benefits for military families from $400,000 to $500,000. President Joe Biden signed it into law in October. Other legislation would make it easier for wounded service members to be reimbursed for clothing damaged by prosthetics, wheelchairs or skin medications they need for active-duty injuries.

This year, Levin, who previously chaired the Veterans’ Affairs Committee’s subcommittee on economic opportunity, said he expects to work with the new Republican chair on modernizing VA healthcare with more services for women and newer veterans of Iraq and Afghanistan and updating the GI bill to cover virtual learning and other educational services.

“I think at the end of the day, Republican, Democrat, it doesn’t matter,” he said. “We’re all fighting for our veterans.”

With the decommissioned San Onofre nuclear plant in his district, Levin has worked to identify permanent repositories for spent nuclear fuel in communities that willingly commit to accept and manage it. Previous plans for disposal at Yucca Mountain Nuclear Waste Repository in Nevada failed after environmentalists, local groups and tribes opposed it.

Levin said his office helped secure $93 million from the Department of Energy, including $53 million last year, for a “consent-based” process to seek communities interested in hosting a nuclear waste site. The department awarded $15 million last year to a half-dozen communities that may be candidates and next will evaluate those applications, select final sites and create plans for safely transporting and storing the spent fuels.

This year, Levin also plans to reintroduce a bill he co-sponsored last year to ensure spent nuclear fuel casks remain intact for 100 years — rather than the 40 years now required.

He also expects to join Rep. Darrell Issa, R-Bonsall, in reintroducing a bill to require regulators to remove nuclear waste first from areas with the highest seismic risk, population and national security concerns, which places San Onofre at the top of the list . 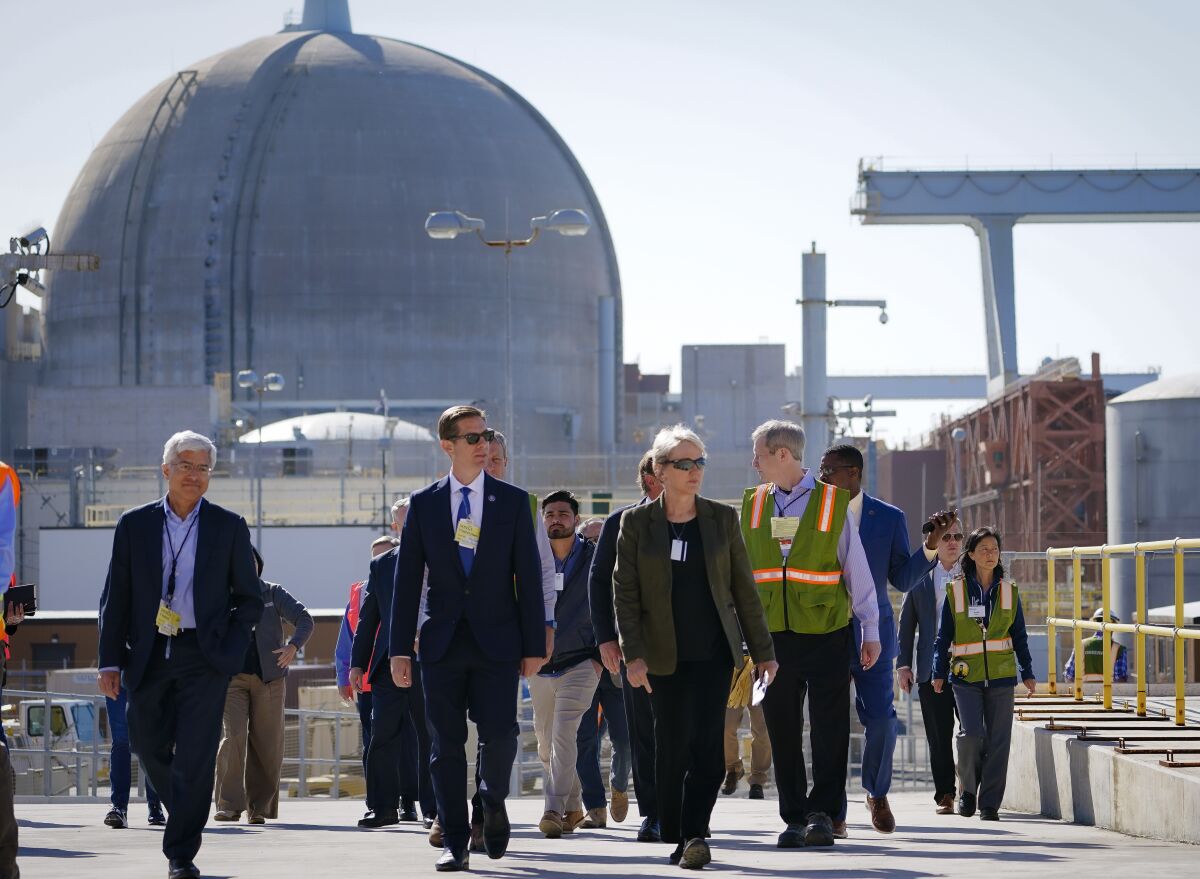 Levin, second from left, and Energy Secretary Jennifer M. Granholm walk up to the secure location where all spent nuclear fuel from San Onofre Nuclear Generating Station is placed in a dry storage system on Thursday, April 21, 2022.

Levin said another high priority this year will be improving the coastal rail line that links cities within his district, and Los Angeles with San Diego. Passenger rail service has been suspended along that line since Sept. 30 because of unstable bluffs.

“We are the second biggest rail corridor in the US, and we are at risk,” he said.

In September, state officials announced a $300 million grant to begin engineering and design for a project to reroute the tracks, and Levin said he aims to secure federal funds for construction of the new route.

He said he secured $32 million through the federal infrastructure law to pay for the Army Corps of Engineers to shore up San Diego train tracks and beaches by adding sand to the shoreline at Solana Beach and Encinitas. Another $9.3 million will cover sand replenishment in San Clemente, where the rail line is now closed because of erosion.

He said he expects the line between San Diego and Lost Angeles County to reopen between late February and early March, but added that the sand projects are only the first step toward moving sections of the coastal rail line to more secure positions.

“The only truly long-term solution, I believe, is strategic relocation of certain parts of the corridor,” he said.

More Nuclear Power Is What Both Parties Want – Bloomberg

Towards diversifying the sources of green hydrogen