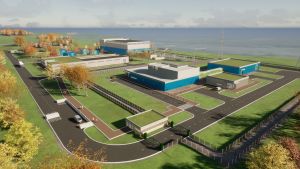 Moltex Energy has received $ 50.5 million from the Government of Canada’s Strategic Innovation Fund (SIF) and the Atlantic Canada Opportunities Agency (ACOA) to advance its project to design and commercialize a molten salt reactor and spent fuel recycling .

“The future of energy in Atlantic Canada is carbon free. Today’s investment in developing innovative SMR technology in New Brunswick will support the use of the Atlantic Loop, help us build a more resilient economy and bring us one step closer to our climate goal of net zero emissions by 2050, ”said the Honorable Dominic LeBlanc , President of the Queen’s Privy Council for Canada and Minister for Intergovernmental Affairs and MP for Beauséjour.

Moltex plans to build the world’s first 300 MW stable salt reactor – Wasteburner (SSR-W) and WAste To Stable Salt (WATSS) at the Point Lepreau Power Plant site in Saint John, New Brunswick, and to provide carbon-free electricity to the grid through the early 2030s.

On the road to commercial development, Moltex will draw on Canada’s world-class nuclear supply chain and create hundreds of quality jobs. Over the next 15 years, these jobs will add around $ 1 billion to gross domestic product and generate approximately $ 100 million in federal government revenues.

The SIF is investing $ 47.5 million that Moltex will bring together. This will be used to advance the SSR-W and WATSS drafts and to validate key assumptions to support Phase 2 of the Canadian Nuclear Safety Commission pre-licensing review of suppliers. The ACOA is investing US $ 3 million that will be used for further WATSS research.

In addition to Moltex, ACOA provided NB Power $ 4,999,568 and the University of New Brunswick $ 561,750 to strengthen the Small Modular Reactor (SMR) cluster in New Brunswick.