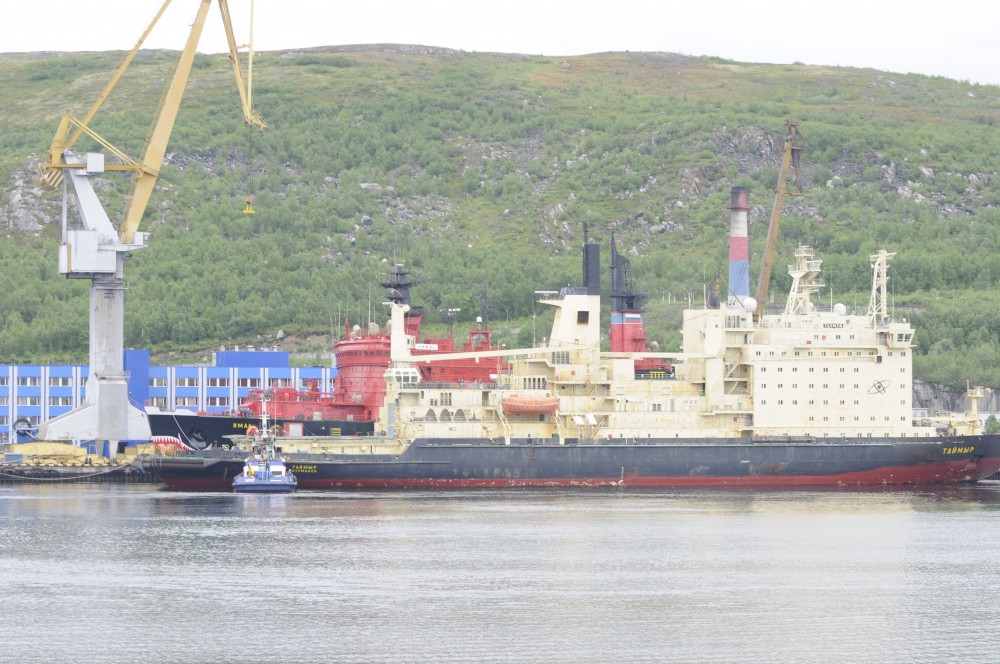 The nearest residential apartment buildings in Murmansk are less than 2 kilometers away. In case of accidental releases, locals will hardly find time to close the windows before radioactive isotopes are spread around. That said, inhabitants in Russia’s largest city above the Arctic Circle are relaxed and used to neighboring nuclear waste management.

At the service base, icebreakers undergo maintenance and repair. After a few years in operation, the uranium fuel rods from the reactors are taken out and new ones are loaded. This is a high-risk operation.

After cooling down in the storage compartments of service ships or onshore containers, the spent fuel is sent by rail through the city center of Murmansk and further to Mayak, the infamous reprocessing plant near Chelyabinsk in the South Urals.

At Atomflot, all equipment and storage casks are designed for loading and reloading the KLT-40 reactors that since the late 1970ties have powered icebreakers built in Soviet times.

Now, the new generation, much larger, icebreakers have started to arrive in Murmansk. The two first of Project 22220 class, the “Arktika” and “Sibir” are delivered and three similar are currently under construction and will start sailing in the period 2023 to 2026.

Also, the first Lider-class giant nuclear-powered icebreaker “Rossiya” will have Atomflot as homeport when she starts working to keep the Northern Sea Route open for the largest vessels year-round.

The new icebreakers have reactors of the RITM-200 and RITM-400 design with fuel elements different in shape and larger in size than those in use with the older KLT-40 reactors.

Atomflot’s tender announcement for the pre-study of a new onshore complex to handle spent nuclear fuel, according to the local news online B-port.

A new building for storing spent nuclear fuel is needed and a huge 160 ton capacity crane has to be placed on the quay. Transport infrastructure and physical protection against theft and terrorists are part of the plan. So are radiation monitoring and fire safety equipment.

Andrey Zolotkov, a nuclear waste expert and former radiation safety engineer with Atomflot, said in a conversation with the Barents Observer that Murmansk region has no alternative location for such spent fuel handling facility than the current icebreaker base.

“No one is even considering the possibility of transferring such nuclear hazardous operations as changing fuel spent from reactors to a place far from the city,” Zolotkov notes.

“Atomflot would be the cheapest and easiest solution as much of the infrastructure is already there.”

With the five new icebreakers of Project 22220 and the Lider-class vessel, the amount of spent nuclear fuel to be managed at Atomflot will increase sharply.

Russia’s floating nuclear power plants, of which the “Akademik Lomonosov” was first, will also be served by Atomflot for changing spent nuclear fuel.

While the “Akademik Lomonosov” has two KLT-40s reactors, the four next in line will be equipped with the larger RITM-200 reactors.

A new service ship to sail the spent nuclear fuel from the floating NPPs on the north coast of Chukotka to Atomflot in Murmansk. Alternatively, the barge with the plant itself could be towed along the Northern Sea Route to Murmansk for maintenance.

With six new icebreakers, five floating nuclear power plants, plus a few of the existing icebreakers supposed to sail for many years to come, the total amount of spent nuclear fuel to be handled and the number of operations at Atomflot will see a sharp increase in the coming decade.