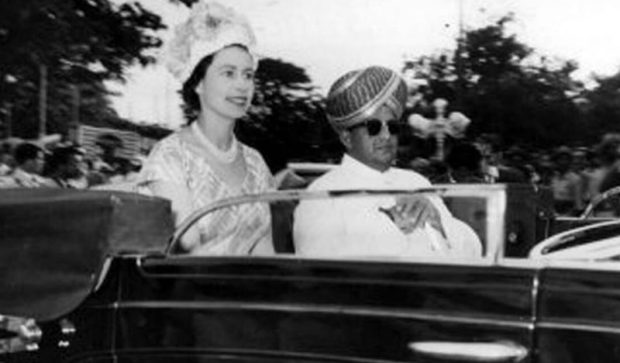 Bangalore: With the demise of Queen Elizabeth II in England, the Princess of the first while Mysuru Royal family, Kamakshi Devi Wadiyar recollected fond memories of her visit to Bengaluru in 1961.

A video ‘made in colour’ now doing rounds on social media brought back the memories of her maiden visit to India post-independence.

”We are extremely saddened by the demise of Her Majesty Queen Elizabeth-II. She was a dignified lady,” recollected Kamakshi Devi.

”I was only eight when Her Majesty visited Bengaluru. My father, the Rajya Pramukh of the state, Maharaja Jayachamarajendra Wadeyar, received the queen at the airport. Along with my mother and siblings, I stood watching her arrival from a distance,” Kamakshi Devi recalled.

Later, Queen Elizabeth II was taken to the ‘Residency’, now known as Raj Bhavan which is the palatial house of the Governor of Karnataka, the princess of the first while Mysore Royal family recalled.

The entire event was made grand with whatever limited resources were available at that time, Kamakshi Devi recalled.

Elizabeth-II spent her night in the Cubbon Bungalow on the Nandi Hills, she added.

“I was 30 at that time. I recall the government and private organizations had announced a holiday in honor of the Queen’s visit. The oil mills, which never closed, were shut for the day so that the employees could see the historic event,” Sirur, now 91, recollected.

He said he stood on ‘Cubbon Road next to the Capitol Hotel to see the slow-moving cavalcade and the Queen greeting the people who were waving at her.

The video that is widely circulating on social media showed the Queen lighting up from the airplane and the Mysore Maharaja Jayachamarajendra Wadeyar presenting her a bouquet.

Hundreds of people gathered at the Bangalore airport to see her. Later, the queen presented a copy of the Bible, translated into Hindi.

The video also shows the present-day MG Road, where a Metro Station has come up now.

In This Way The Summer Heat Can Be Avoided In Winter.