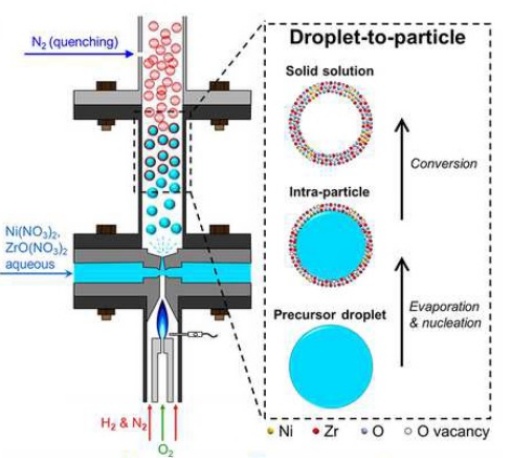 Two University at Buffalo-led studies show promise for dry reforming of methane, an industrial process that could slow the pace of climate change

BUFFALO, NY – A byproduct of landfilling, livestock farming, coal mining and other human activities, methane emissions are one of the key drivers of climate change.

Yet for decades scientists have struggled to develop inexpensive ways to utilize methane – which is the primary component of natural gas – without also producing carbon dioxide, the most abundant greenhouse gas in Earth’s atmosphere.

Among the possible solutions is dry reforming, a process that has the potential to convert both methane and carbon dioxide into chemical feedstocks, which are raw materials that can be used to manufacture or process other products.

However, for dry reforming to become commercially viable, new and improved catalysts are needed.

In two University at Buffalo-led studies published in June – one in Chem Catalysis, the other in Angewandte Chemie – researchers report a new production method for creating nickel-based catalysts that may overcome longstanding challenges.

“To meet the objectives of the Paris Agreement, to achieve carbon neutrality, we must implement many changes to both energy generation and production of chemical feedstocks,” says the studies’ lead author Mark Swihart, PhD, SUNY Distinguished Professor and chair of the Department of Chemical and Biological Engineering in the UB School of Engineering and Applied Sciences.

Shuo Liu, a PhD candidate in Swihart’s lab, is the first author of the studies.

Co-authors with UB ties include Satyarit Rao, Mihir Shah, Jilun Wei, Kaiwen Chen and Zhengxi Xuan; as well as Eleni A. Kyriakidou, PhD, assistant professor of chemical and biological engineering at UB, and Junjie Chen, PhD, a postdoctoral scholar at Stanford University who received a PhD in Kyriakidou’s lab.

Other co-authors include Jeffery J. Urban, PhD, director of the Inorganic Nanostructures Facility at the Molecular Foundry of the Lawrence Berkeley National Lab, and Chaochao Dun, PhD, a postdoctoral scholar at Urban’s lab.

To remedy this problem, the research team developed a one-step aerosol process to fabricate low-cost and high-performance catalysts. The process is based upon a unique flame reactor developed in Swihart’s lab.

The team employed the reactor to create tiny spherical particles called nanoshells that resist both coking and sintering.

In the Chem Catalysis study, the team reported that, over the course of 500 hours, the catalysts remained effective, converting 98% of methane into synthetic gas, or syngas, which is a mixture of hydrogen and carbon monoxide that can subsequently be used to produce a variety of chemical products.

In a second study, the team used the reactor to produce a new mesoporous silica material that has a surface area that exceeds 1,000 square meters per gram. The team also created a method to deposit nickel or other nanoparticles within the mesoporous silica – process known as in-situ deposition.

As reported in Angewandte Chemie, the mesoporous silica catalyst converted 97% of methane for over 200 hours.

This advancement, Swihart says, provides a pathway not only to improved catalysts for dry reforming of methane, but for many other environmentally and economically beneficial reactions.