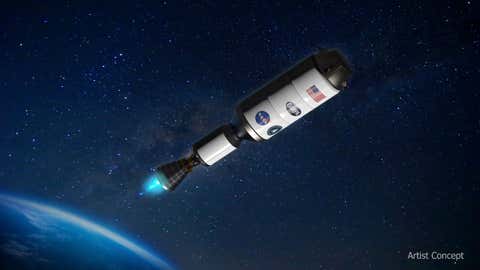 Artist concept of Demonstration for Rocket to Agile Cislunar Operations (DRACO) spacecraft, which will demonstrate a nuclear thermal rocket engine.

Apart from the obvious obstacles in getting to Mars, one major bottleneck that stands in the way of humanity conquering the Red Planet is the sheer distance separating it from Earth. Scientists have estimated that the journey can take between 7 and 9 months. Can you imagine how much fuel and money one would need to power this mission? Not to mention, the boredom that would surely accompany the astronauts on their trip.

However, if NASA has its way, we would be ferrying humans to and from Mars in very short durations in no time!

On Tuesday, the space agency announced its partnership with the US government’s Defense Advanced Research Projects Agency (DARPA), as it hopes to demonstrate a nuclear thermal rocket engine in space as soon as 2027.

With the help of this new technology, astronauts will be able to journey to and from deep space faster than ever — a major capability to prepare for crewed missions to Mars, claimed NASA Administrator Bill Nelson.

Nuclear thermal propulsion technology can provide high thrust and twice the propellant efficiency that chemical rockets do. The system consisting of a fission reactor used to generate extremely high temperatures essentially functions by transferring heat from the reactor to a liquid propellant. That heat then converts the liquid into a gas, which expands through a nozzle to provide thrust and propel a spacecraft.

Thus, a nuclear thermal rocket will allow for faster transit time, effectively reducing the risks for astronauts as well. This is a crucial part of making human missions to Mars feasible, as longer trips would require more supplies and more robust systems.

NASA’s announcement has come amid an ongoing nuclear space race between the US, Russia and China, with the three superpowers competing to expand their extraterrestrial nuclear capabilities and powering colonies on the moon.

For weather, science, and COVID-19 updates on the go, download The Weather Channel App (on Android and iOS store). It’s free!