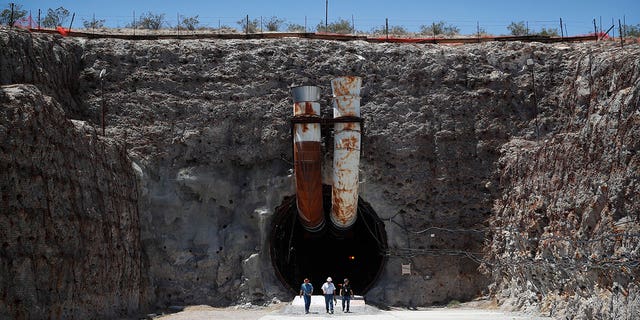 Nevada is pressing the US to kill its nuclear waste plan

After a decade in limbo, Nevada is pressing US nuclear regulators to finally kill a mothballed proposal to entomb the nation’s most radioactive waste beneath a windswept volcanic ridge north of Las Vegas.

“The time has come to put this long-dormant and unproven federal project out of its misery,” the state said in a document submitted Tuesday to the Nuclear Regulatory Commission about the Yucca Mountain project. “Fundamental fairness requires that this proceeding be ended if possible.”

The NRC, which regulates and licenses US nuclear power plants and the handling of radioactive material, offered no immediate comment on the state request. Commission spokesman David McIntyre said the panel would review it.

The document urges the federal agency to reopen its review and finally end 40 years of Energy Department efforts to prove the Yucca Mountain site would be a safe place to put highly radioactive waste shipped in from power plants across the nation.

It derides the repository as “an unfunded zombie-like federal project that has staggered around the halls of Congress begging for appropriations support for more than a decade with no success.”

An estimated $15 billion was spent drilling a 5-mile U-shaped test tunnel and conducting studies of whether 77,000 tons of some of the most lethal material known to humans could remain safely buried for thousands of years at the site.

Nevada is pressing the US to finally scrap its already mothballed plan on how to dispose of the country’s most hazardous nuclear waste. Pictured: People leaving the Yucca Mountain during a congressional tour on July 14, 2018, near Mercury, Nevada.
(AP Photo/John Locher)

Some estimates put the final cost of building the repository at $100 billion, including drilling a honeycomb of underground rail tunnels and engineering a way to encase the waste and prevent leakage into underground water sources.

The US has no long-term plan for managing or disposing of hazardous nuclear waste being produced and stored at reactors nationwide, but Energy Secretary Jennifer Granholm has spoken in recent months about the need to find one.

Nevada’s proposal came the same day the department announced it would spend $16 million to promote what it called “consent-based” site selection and management of spent nuclear fuel.

The government promised US nuclear power producers in 1982 that it would find a place to put radioactive spent fuel. Congress in 1987 narrowed the choice to Yucca Mountain, a secure corner of a vast federal reservation where nuclear weapons used to be detonated about 100 miles northwest of downtown Las Vegas.

But plans for the repository were mothballed after 2010, when then-US Senate Democratic Majority Leader Harry Reid, Congress and the administration of President Barack Obama shut off funding.

Some elected officials in rural Nevada favor the proposal and the jobs it could bring. But most of the state’s congressional delegation and lawmakers have vigorously opposed what Democratic US Rep. Dina Titus on Tuesday called a “dangerous project to force a nuclear waste dumping ground on Nevada.”

“Nevada doesn’t use nuclear energy; we don’t produce nuclear waste; and we shouldn’t be required to store it,” Titus said in a statement.

gov. Steve Sisolak, US Sens, Catherine Cortez Masto and Jacky Rosen, state Attorney General Aaron Ford and US Reps. Steven Horsford and Susie Lee — all Democrats — also endorsed the state’s call for action. The state launched a website focusing on what it calls dangers and flaws in the plan.

The licensing process itself — a review of scientific and technical data amid challenges by the state and other opponents — has been projected to cost $330 million and take five years to complete.

The state said Tuesday it wants a “summary disposition” by the NRC, not a complete slate of hearings. Challenges of a range of Energy Department findings about the geology of the site and the transport of nuclear material would remain unanswered.

Nuclear power provides about 20% of electricity in the US, accounting for about half the nation’s carbon-free energy. Most of the 93 reactors operating in the country are east of the Mississippi River.

Nevada’s request to the NRC also noted that the effects of human-caused climate change were not studied before the Yucca Mountain project was halted.

A recent Associated Press look at energy policies nationwide found momentum building for the first expansion of nuclear reactor construction in more than three decades. A survey found that about two-thirds of states now say that nuclear, in one fashion or another, will help replace fossil fuels.