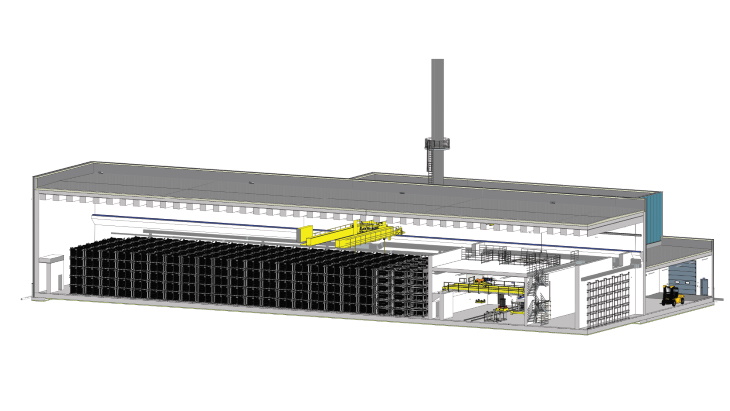 The planned facility for the storage of lightly loaded barrels in Dessel (Image: Ondraf)

Ondraf / Niras, the Belgian radioactive waste management authority, said construction of the Dessel facility had recently started. The building houses the barrels with low levels of waste, where there is a risk of frost formation.

In 2013, during a routine inspection of a warehouse building, a flow of frost was observed on a number of low-level garbage drums. Ondraf immediately embarked on an intensive research program that showed that the gel formation was due to a chemical reaction in the concrete that coats the waste, rather than a radiological reaction.

Ondraf and his industrial subsidiary Belgoprocess have decided to store all barrels that are at risk of frost formation in a separate storage building. This building enables the safe storage, inspection and control of waste drums. In the meantime, research is ongoing into how these barrels can be handled in the long term.

At the end of last year, Belgoprocess received a nuclear permit from the Federal Agency for Nuclear Control. The environmental permit had already been granted.

The first waste drums are expected to be placed in the new facility within three years.

The Central Organization for Radioactive Waste (Covra) has announced plans for a new multifunctional storage building for low and medium-level waste. The additional storage space is required because the current warehouse is slowly filling up.

The new facility is intended for the storage of waste currently stored on the premises of the medical isotope manufacturer NRG in Petten and for future waste disposal. The building may also have space for residual waste from a plasma furnace.

The current permit under the Nuclear Energy Act must be changed for the construction of the new building. In the interests of transparency and openness, Covra has decided to draw up an Environmental Impact Declaration (EIS) for this change as part of a comprehensive consultation process. The notification for the EIS is currently being completed. This note is being prepared to provide advice on how detailed the report should be and to inform the public of the proposed expansion of the Covra site.

Covra noted that the Nuclear Safety and Radiation Protection Agency (ANVS) will evaluate the report. The Environmental Impact Assessment Committee is also advised. The final environmental impact report will be based on the feedback from these parties and the results of the public consultation. Covra expects to receive the advisory memorandum from ANVS within six to 12 weeks.