Zach Cohen and Kylie Atwood have a story on CNN (new satellite imagery shows North Korea recently took steps to hide nuclear weapon sites) that builds on some of the work Dave Schmerler and I did with images of Maxar.

North Korea recently constructed a building near Yongdoktong to store its nuclear weapons, apparently to cover up the entrances to two underground tunnels.

Among other things, Cohen and Atwood were very helpful in getting a senior US intelligence official to confirm that “Yongdoktong was previously identified by US intelligence as a suspected North Korean nuclear weapons storage facility and is still being used for that purpose” – something Ankit Panda reports in his book Kim Jong Un and the Bomb.

Here is the article Dave Schmerler and I prepared and a little GIF at the end.

North Korea has an important research and development center for nuclear weapons in Yongdoktong near Kusong. New satellite imagery from Maxar shows that at some point last year North Korea erected a structure that may obscure the entrances to an underground facility that is used to store nuclear weapons or components. 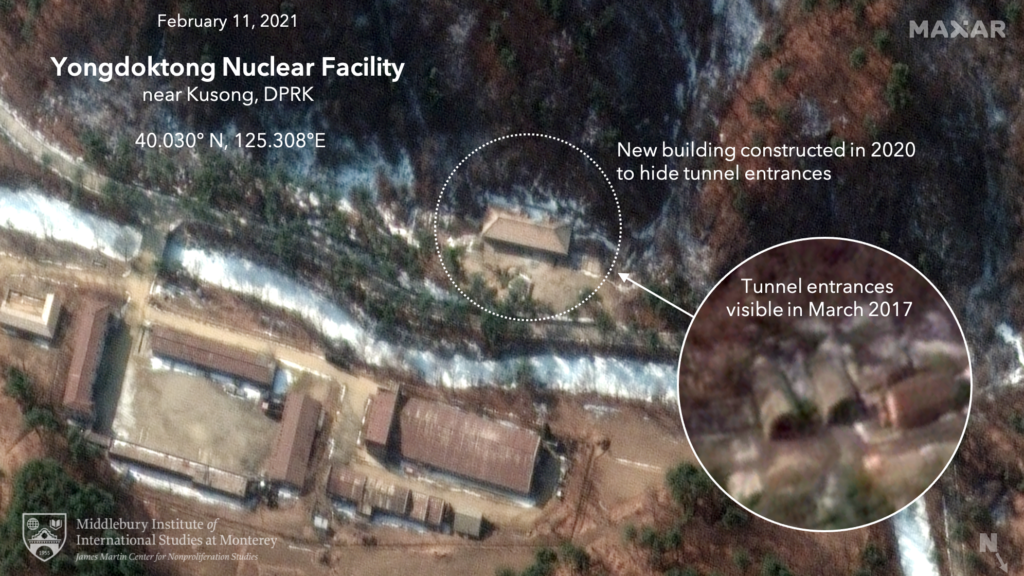 The picture taken by Maxar on February 11, 2021 shows the new structure covering the entrance to two tunnels in Yongdoktong.

The Yongdoktong (용덕동) site is known to American and Allied intelligence agencies, and its name has been featured in the press many times. The site’s existence was first announced in the late 1990s after US officials informed their South Korean and Japanese colleagues about the relocation of explosives testing from the Yongbyon Nuclear Science Center to Yongdoktong. At the time, a Japanese news magazine was printing a poor quality satellite image of the Yondoktong site. (“North Korea’s” Nuclear Weapons “Put the World Back in” Crisis “” Tokyo Shukan Posuto (in Japanese), April 16, 1999.) We used this image to geolocate the location, which is at: 40.0286, 125.3102 ° . 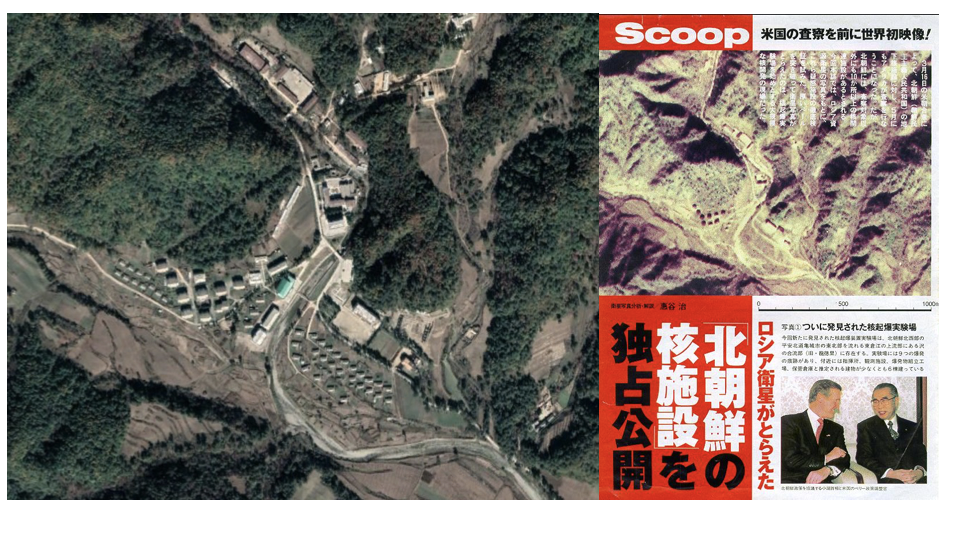 Yongdoktong reappeared on the news in 2003 when David Sanger reported in the New York Times that the United States had notified allies in South Korea and Japan of the existence of an “advanced nuclear test site in an area called Youngdoktong.” [sic] Equipment was set up at the site to test conventional explosives that, if detonated, could compress a plutonium core and cause a compact nuclear explosion. “Asian news agencies also reported on the briefing. High-explosive tests usually take place at or near a country’s main nuclear weapons research and development facility.

Yongdoktong is also of interest because it appears to be North Korea’s only nuclear weapon storage facility. “According to US estimates, North Korea will operate a single storage location for its manufactured warheads and their fissile cores at the end of 2017,” reported Ankit Panda in his book “Kim Jong Un and the Bomb”, an underground facility known to the USA as Yongdoktong, northeast of the city of Kusong . ”

The Yongdoktong site appears to have several facilities related to nuclear weapons, including explosives testing and a warhead storage facility. These facilities are located in a mountain valley about nine kilometers long east of Kusong. There are numerous tunnels and underground facilities as well as office buildings, industrial buildings and residential buildings on the site.

Unsurprisingly, the Yongdoktong site is undergoing an important scrutiny by the US and allied intelligence agencies. In September 2018, U.S. intelligence agencies identified a series of activities in Yongdoktong that analysts believed were inconsistent with the hope that North Korea could abandon its nuclear weapons programs after then-President Donald Trump’s meeting with Kim Jong Un in Singapore. “The latest findings show that three senior US officials said Kim’s regime has escalated efforts to cover up its nuclear activities,” said Courtney Kube and Carol Lee. “In the three months since the historic Singapore summit and Trump’s proclamation that North Korea wants to denuclearize, North Korea has set up structures to cover up access to at least one warhead storage facility, officials said.” At the time, those of us in civil society saw no clear evidence in commercial satellite imagery to confirm these claims. During this period we have observed some changes to a tunnel entrance, which is located at: 40.0148, 125.326.

However, now it is clear that such structures are being built. New satellite imagery from Maxar shows that sometime in 2020 North Korea erected a building-like structure that now covers two tunnel entrances previously identified at the Yongdok nuclear weapons site. Pictures published by Maxar show the two tunnel entrances in December 2019 and a new building-like structure that will be visible until February 2021. 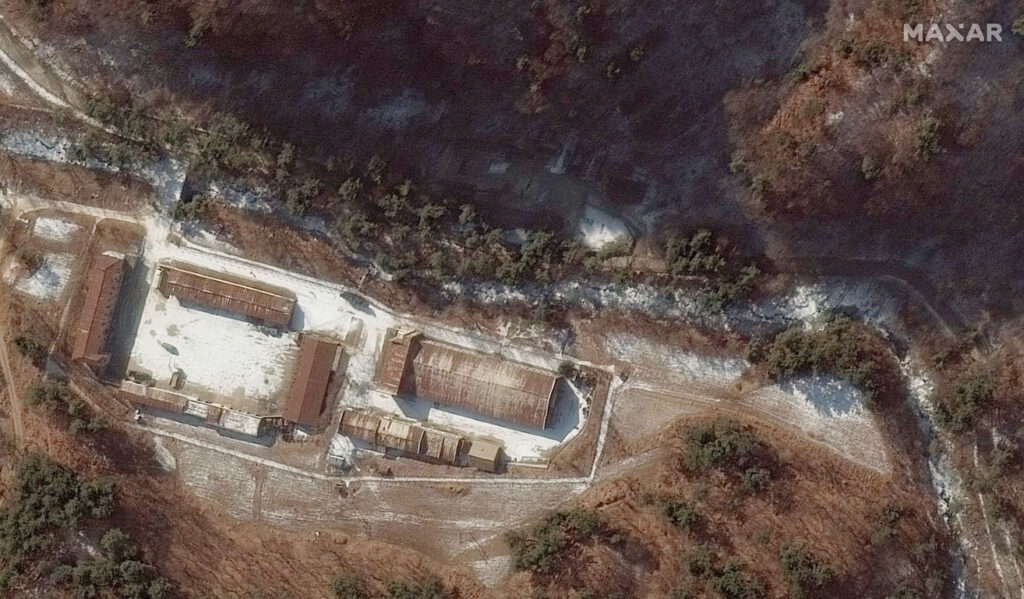 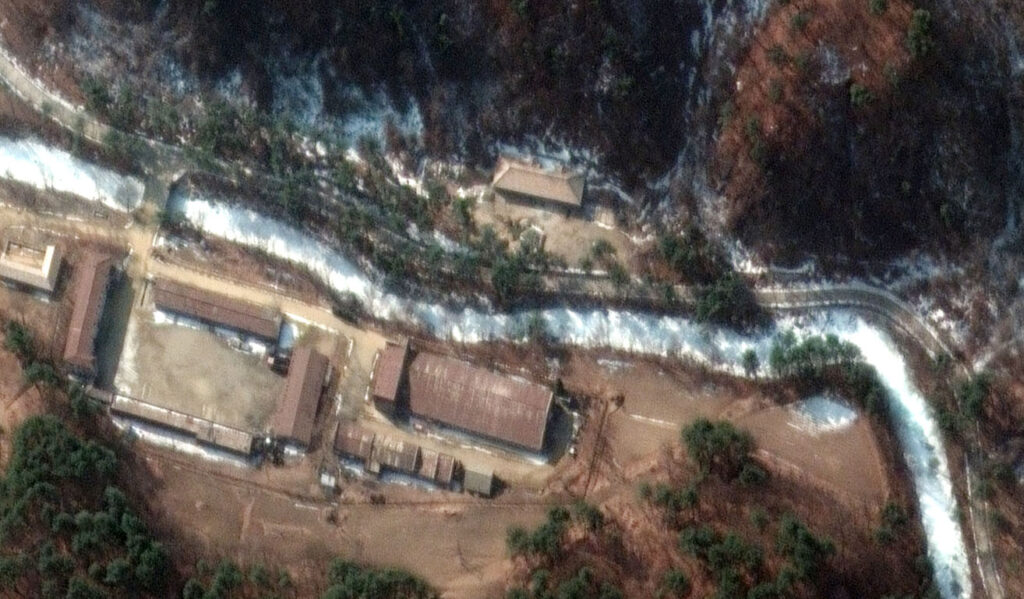 North Korea has blocked access to other underground facilities in the same way. During an IAEA visit to the Yongbyon nuclear complex in 1992, then director Hans Blix was given a tour of an underground complex. The entrance looked like a building on a slope.

Scenes from the IAEA’s visit to the Yongbyon nuclear complex in 1992 – before and during a tour of an underground storage facility (Source: Youtube – IAEA recordings of Director General Hans Blix, who visited North Korean nuclear sites in 1992 / Institute for Science and International Security). 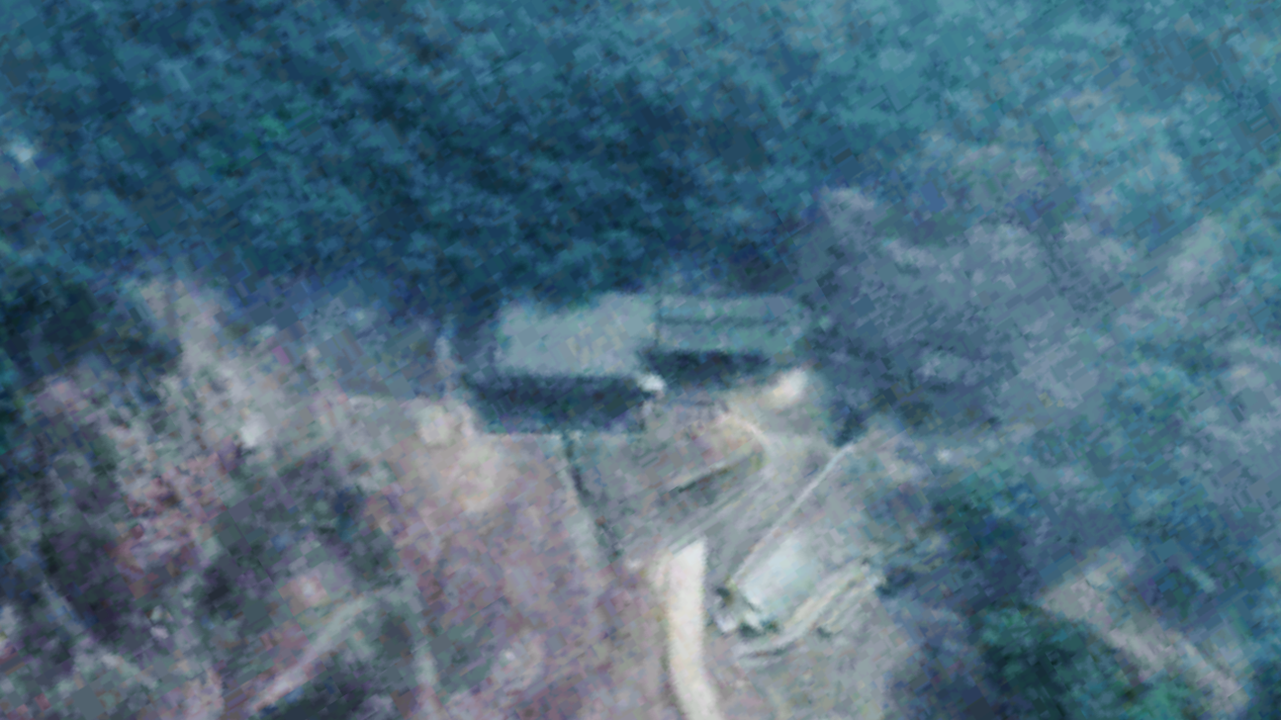 It is unclear what the purpose of the structure in Yongdoktong is. One interpretation is that North Korea is trying to disguise the movement of nuclear warheads and nuclear weapon components in and out of tunnels at the Yongdoktong site. However, given the location is known to foreign intelligence agencies, the value of the new structure appears to be limited. Another possibility is that the new structure provides additional space for loading and unloading charges related to nuclear weapons that cannot be seen in overhead images. Overall, however, the structure reminds us that North Korea has and continuously maintains a significant nuclear weapon manufacturing infrastructure.

Reactors worth their salt