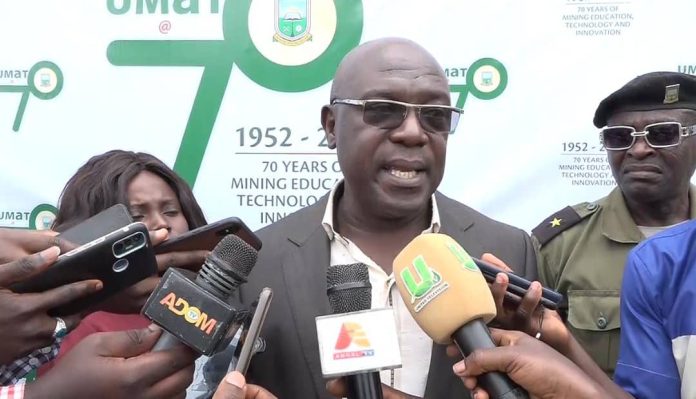 Professor Richard Kwasi Amankwah, the Vice Chancellor of the University of Mines and Technology (UMaT), Tarkwa, says graduates of the University are unique and play diverse roles in the mining industry across the world.
He said, “If you go anywhere in the world, in every mining establishment from Ghana to Burkina Faso, Guinea, Mali, Australia, United States, Britain and other countries, our products are leading important ventures in the mining industry.”
Addressing the media in Tarkwa, the Vice Chancellor explained that as UMaT celebrated its 70th Institutional Anniversary, it was necessary to tell the world about their achievements and plans.
He said although UMaT offered a lot of services to the community, there were so many mining institutions around the world, but they have captured the West African market.
Again, he said, “We have many samples in our laboratories from Guinea, Burkina Faso and Mali are undergoing various investigations and tests to find out how we could improve recovery in the various establishment and people in this university were working on them. They are generating data that is virtually improving data on various gold processing plants around the world so, in terms of consultancy services, we are ahead and doing great service for our community.”
Regarding innovations and research, Prof Amankwah explained that in every departmental laboratory on campus people were undertaking research and these involve the professors, lecturers and students.
He also said, “sometimes students are able to even give professors ideas regarding what they think and when they follow it leads to great innovations.”
“There was one thing that the world cannot live without, and it is innovation. Every time we need to improve upon something to make the world a better place and at UMaT we have encouraged our students to be smart and innovative. I am glad they have adhered to it.”
Meanwhile, Professor William Kwame Buah of UMaT, who made a presentation on “creating wealth from waste in Ghana” said about nine million dollars’ worth of activated carbon were imported for gold purposes alone in the country.
According to him, “most of the activated carbon comes from cocoa nut shells and we have a lot of these, but they only serve as waste collecting water and breeding spots for mosquitoes and other things”.
He said over the years, UMaT had designed reactors which could be used for small and large-scale production of activated carbon, adding that the reactors could allow continuous production of activated carbons at a capacity of about 50 kilograms per hour.
He said UMaT had entered into a joint agreement with VALCO to ensure commercial production of activated carbon and, if this is fully implemented, it would reduce the importation of activated carbons with all the added advantages; such as earning foreign exchange and creation of jobs. This would also serve as a means of abatement of the environmental nuisance created by these precursors”.
Prof Buah said the second aspect of his research was in the area of ​​treatment of activated carbon in the processing plant where they were produced.
“Currently my research team members, Mr Gideon Kortey of the mechanical engineering department of the university and Mr Kwabena Owusu of Gold Star Wassa Mine and myself have come up with a reactor that can allow plant site preparation of activated carbons and this project has been funded by the Ghana Chamber of Mines,” he said.

For him, “Presently there was no known technology which could allow the processing plant to treat the waste-activated carbons. Mining companies are not getting the full benefit of the gold ore they mine, they lose part to the tailings dump and others sell it out to outside facilities to treat it.”
“The Ghana Chamber of Mines has given us a grant and we have been able to produce a reactor which can allow continuous treatment of the waste activated carbon so gold can be recovered from the plant,” he added.
Prof. Buah expressed appreciation to all those who made this aspect of the research possible and said UMaT was an active research University and hoped the collaborative research with industry shall continue to provide solutions for the socio-economic development of the nation.

Is there a gold standard for ESG regulation? – ETF streaming