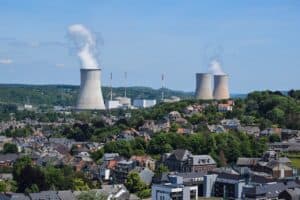 Which energy technology is low carbon and reliable? The UK government’s answer seems to be nuclear.

Boris Johnson will announce at the Conservative Party conference in Manchester that all UK electricity will come from renewable sources by 2035, according to a recent report in the Times.

The government suspects the UK public – tired of queues at gas stations and fear of winter gas bills – will like the idea of ​​moving away from fossil fuels. But the nature of this energy crisis, fueled by a late summer lull in wind power generation, high wholesale gas prices and Britain’s meager prospects for energy storage, calls for a cautious response.

And which energy technology offers low-CO2 properties and a reliable basic supply? The strong response from the UK government appears to be nuclear.

Just three years ago, British ambitions for new nuclear power plants ran into trouble. The large Japanese conglomerates Toshiba and Hitachi had pulled the plug on their separate nuclear projects in the country. But with renewed support from Boris Johnson’s administration, one of them now seems to be back on the table.

It was recently announced that the government and American partners were discussing the construction of a new nuclear power plant for the US nuclear engineering company Westinghouse on the island of Anglesea in North Wales. There is even talk of government support for Derby-based industrial giant Rolls-Royce to develop a range of smaller modular nuclear reactors.

These are essentially scaled-down versions of traditional power plants that will produce 470 megawatts of electricity compared to the 1,000 megawatts of their larger equivalents. What is important is that real factory-based manufacturing becomes possible with these new designs. The factories produce modules for quick assembly on site.

The government’s approach should benefit UK businesses. But how would a new generation of nuclear power plants help keep the lights on while reducing emissions from the energy sector?

The reactors in nuclear power plants convert the heat generated when atoms are split (a process known as nuclear fission) into electricity and can run at maximum power for months in any weather. No greenhouse gases are emitted during this process – however, emissions are to be expected during the construction of the plant itself. The steam rising from the iconic cooling towers of a nuclear power plant is water, not carbon dioxide.

Nuclear power is seen by many experts as a clean and green source of energy for modern economies. (Photo: Pixabay / Ben_Kerckx)

Large nuclear power plants have huge turbine generators that spin at high speeds. Despite minor national fluctuations, these maintain their speed and ensure stability in the network. A constant basic supply of nuclear energy could continue to meet demand if renewable energies fail because the wind is not blowing and the sun is not shining.

There are other ways nuclear power can support decarbonization. The heat generated in nuclear reactors could be pumped into the central heating systems of homes and other buildings, replacing fossil gas boilers. Nuclear energy could even be used to produce hydrogen as fuel – a form of stored energy with potential benefits for heating and transportation. And because nuclear fuel like uranium is so-called energy density, even relatively small quantities can provide an adequate supply. The UK also has its own uranium enrichment fuel plant and facility, which allows for greater national control over the entire process.

Concerns remain about the cost and safety of nuclear energy. However, these should now be placed in the context of climate change. Fossil fuels in power generation need to stop, and the stable and continuous operation of nuclear power plants is a useful addition to the fluctuating performance of renewable sources such as wind and solar. This seems to be the government’s logic in favor of boosting investment in both nuclear and renewable energy.

UK governments have urged more than once in the past two decades to rebuild UK nuclear capacity. When Tony Blair was Prime Minister he wanted a number of very large nuclear power plants. Construction of the first of these, Hinkley Point C, is in full swing. The pandemic and other problems have caused delays, but the first generation of electricity from the two large reactors is expected in the summer of 2026.

Hinkley Point C is underpinned by a financial deal with China signed by former Chancellor of the Exchequer George Osborne. Gone are the days when Osborne said “Britain should run to China” in 2015. Likewise, the rhetoric of a nuclear renaissance, which coincided with an optimism for globalization and market liberalization after the Cold War. It first became clear that competitive electricity markets were faced with the challenge of replacing old nuclear power with new ones. Then globalization stalled with the return of great power nationalism.

Nuclear technology is again targeted by the government, but this time it will require more British money and technology. Talk of a green future has combined with voices on the right crying out for a new sense of national self-reliance, free from the vicissitudes of global fossil fuel supplies.

Despite these realities and the many difficulties that have arisen along the way, the UK’s nuclear renaissance remains internationalist. It is a strength that should be defended.

This article was written by William Nuttall, Professor of Energy at the Open University in the UK. It is being republished by The Conversation under a Creative Commons license. Read the original article.

The black hole of the protest jurisdiction: can I challenge the award of an “other transaction agreement”? – JD Supra