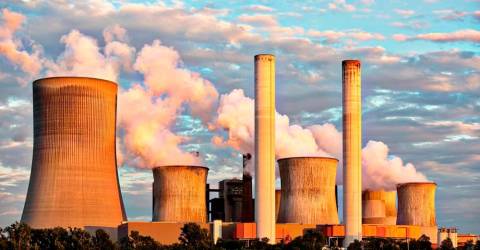 Nuclear energy the way to go?

MALAYSIA’S response to climate change underpins our international commitments – previously through the Kyoto Protocol 1997 (ratified in 2002), which expired in 2020, and thereafter the now legally binding Paris Agreement 2015 (ratified in 2016), which requires concerted policy focus and action from signatories to ensure the fulfillment of the set objectives and national obligations.

Prime Minister Datuk Seri Ismail Sabri Yaakob stated that the government will continue to uphold Malaysia’s pledge to cut the greenhouse gas (GHG) emissions intensity of the gross domestic product (GDP) by 45% in 2030, even as the country’s contribution is less than 0.7 %.

Energy demand will continue to rise in tandem with population growth and Malaysia is no exception.

This would mean even higher increasing amounts of GHG emissions released into the atmosphere as a result of the corresponding increasing energy consumption if the energy mix is ​​not well-diversified or if we’re becoming less energy efficient (eg, using the same level of energy when it could have been reduced via green and renewable technologies).

The solution is to move and transition toward an energy mix that’s less dependent on conventional sources, so that our nationally determined contribution to reducing GHGs by 45% of GDP can be on track (as periodically reported via Malaysia’s National Communication to the United Nations Framework Convention on Climate Change), and that we’re heading towards becoming a carbon neutral nation, which is doing its part to reduce global warming by 1.5°C.

As part of the wider policy direction, it is expected that the government is planning to phase out the seven-gigawatt coal-fired capacity power plants by 2033.

Coal-fired power plants are currently the backbone of our power generation.

Phasing out coal and replacing it with natural-gas-powered generators can reduce carbon dioxide (CO2) emissions by up to 67%.

And in addressing the wider policy issue (of increasing our energy mix), the government has hammered out a plan to boost the share of renewable energy (RE) in the country’s installed capacity (currently at 8,700 megawatts) by up to 31% in 2025 and 40% (equivalent to 18,000 megawatts) in 2035 under a power generation plan.

Notwithstanding, over the years the deployment of renewable energy technologies such as hydroelectric power has been alleged to have caused ecological destruction as is the case of the Bakun dam (the largest in Malaysia).

Solar energy is also insufficient due to the inherent intermittency and non-dispatchable nature of its generation.

For this reason, it’s not hard to understand why nuclear power, as the alternative clean (and “sustainable”) energy, is still the preferred option for some policymakers.

In Malaysia, nuclear and atomic research began as early as 1972 with the setting up of the Center for Application of Nuclear Energy (Crane)/Malaysian Institute for Nuclear Technology, which is now known as the Malaysian Nuclear Agency under the auspices of the Science, Technology and Innovation Ministry.

As it is, there is no consensus on whether nuclear power can be deemed to be a type of renewable energy. For some, it’s better denoted as recyclable energy.

This is perhaps one reason why the question whether nuclear power plants (NPP) should be integrated into a broader energy mix in Malaysia – to improve energy security and to meet the target of becoming a carbon neutral country by 2050 while not causing an ecological burden – is still up in the air.

In 2009, former prime minister Datuk Seri Najib Abdul Razak announced a plan to have a small-scale nuclear reactor with the view of potentially deploying nuclear energy as an option, which was also outlined and highlighted under the 10th Malaysia Plan (2011 to 2015) .

To appreciate the scale and scope of nuclear power energy, according to Swiss Energy Scope, “it takes almost 700 wind turbines to replace the electricity production of an NPP”.

Thus, 1kg of uranium corresponds to nearly 14,000 kg of coal and enables the generation of 45,000 kWh of electricity.

The fall of the ancien regime (old order) of the hegemon Barisan Nasional (BN) in 2018 saw a renewed policy interest in the energy mix strategy.

But the focus on renewable energy technologies under the Pakatan Harapan (PH) government prevented progress in developing NPPs due to concerns over radioactive waste.

She also announced that the Malaysia Nuclear Power Corporation would be shut down.

The policy mood was set against the backdrop of palpable and mounting anger towards Lynas Sdn Bhd’s (an Australian rare earth mining company) permanent disposal facility for radioactive waste storage due to its location and environmental concerns.

The Malaysian Atomic Energy Licensing Board had arbitrarily established its radiation exposure safety criteria which was not in accordance with international standards.

This provision was utilized by Lynas to claim that its low-level radioactive wastes were secure and safe.

All of this further contributed to the bias against radioactive waste, including and particularly concerning nuclear power.

What is not often highlighted is that based on empirical findings, coal ash generated from conventional coal-fired plants is more radioactive than nuclear waste.

To quote from the article, “…when coal is burned, uranium and thorium are concentrated at up to a few times their original levels. In fact, the fly ash emitted from burning coal for electricity by a power plant … (has) 100 times more radiation than a nuclear power plant producing the same amount of energy”.

Uranium (on its own) and thorium (in conjunction with a fissile material such as recycled plutonium) are, of course, widely used fuel for nuclear fission which in turn provides the heat that produces the steam which spin the turbines for power generation in NPPs .

Despite the images of hazardous signs conjured up, nuclear power is still considered the cleaner and safer source of energy (zero GHG emissions).

Whereas the externalities in the form of GHGs produced from conventional energy pose greater health risks and kill more people surreptitiously.

The issue, of course, narrows down to radioactive waste and the risks of nuclear and radiation accidents.

In other words, the management of radioactive waste and measures to minimize the risk of incidents.

On the former, instead of thinking purely in disposal and storage (capacity) terms, we should have a paradigm shift and go for recycling/reusing the usable parts of the fuel.

The rest of the waste (ie, non-usable parts) can be reprocessed into less hazardous materials to be safely disposed and stored by way of vitrification (ie, converting nuclear waste into solid, stable glass).

The 2011 Japanese earthquake and tsunami which also destroyed the Fukushima Daiichi NPP reactors and the concomitant release of low-level radiation did not result in mortalities.

In 2018, the Japanese authorities confirmed that only one NPP worker had reportedly died from lung cancer as a result of the radiation.

It’s notable that Chernobyl and Fukushima did not have “fail-safe” designs and that the safety concerns and operational risks were never seriously addressed.

They were also constructed back in the 1970s based on the prevalent technologies then.

To quote from “The New Technologies for the Construction of Nuclear Power Plants” (New Developments in Atomic Energy Research, Jorge Morales Pedraza, January 2013): “The type of nuclear power reactors in operation in the Fukushima NPP was of the boiling water reactor type constructed in the 1970s but without the changes … to modify some failure in the design.”

Post-Fukushima safety standards have improved ever since, including the adequacy of station design for external hazards, emergency planning onsite and offsite, etc.

Many of the NPPs are now equipped with advanced technologies such as small modular reactors and rely more on passive systems (automatically bringing the reactor to a safe shutdown mode during disaster events without the need for external intervention, ie, operator action). Furthermore, NPPs can be positioned offshore.

Russia is the pioneering example with its floating combined heat and power nuclear power plants.

As these NPPs are not static (“centralised”) in one place, they can be readily mobilized and relocated to other places during emergencies or incidents/accidents.

It’s not surprising that the International Atomic Energy Agency has claimed that global interest in nuclear power continues to be strong, especially in the developing world.

In conclusion, what we need is a paradigm shift to re-envision the deployment of nuclear power for Malaysia.

FANR’s Female Emiratis: Significant players to ensure the safety and security of nuclear and radiological activities in the UAE – وكالة أنباء الإمارات