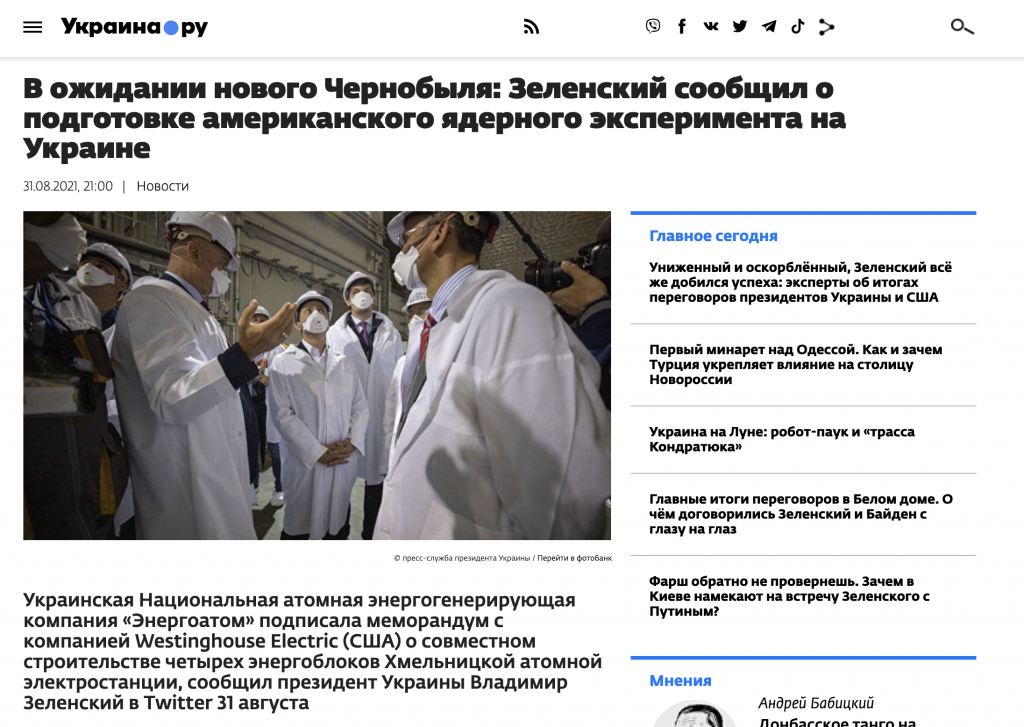 During the visit of the Ukrainian President Volodymyr Zelenskyj to the USA, Ukraine signed several cooperation agreements with American companies. In particular, the Ukrainian state nuclear utility Energoatom signed an exclusive $ 30 billion agreement with Westinghouse to complete the construction of Unit 4 of the Khmelnytskyi Nuclear Power Plant and to move Westinghouse reactors to several other locations in Ukraine.

Russian media reacted quickly, hailing the deal as a future nuclear apocalypse and an existential threat to Ukraine.

Upon learning of the signed agreement, the Russian media responded immediately by listening to the memory of the Chornobyl nuclear accident in 1986 and predicting that a mushroom cloud would soon be floating over Ukraine as a result of the agreement. The Regnum website suggested that “one chornobyl is clearly not enough” for Ukraine. Other media did not skimp on nicknames either.

“The Ukrainian authorities have decided to risk everything and carry out nuclear experiments on their territory. The largest nuclear energy experiment in Ukraine ended with the explosion of the Chornobyl nuclear power plant. Its consequences have not yet been completely eliminated, ”writes the publication Ukraina.ru. The publication conveniently omits the fact that neither the US nor the American companies had anything to do with the Chornobyl disaster and its aftermath, it was the Soviet Union that built and operated the nuclear power plant and carried out the experiment that led to the Explosion led, and then he was silent about the accident for many days.

The prediction of a nuclear apocalypse in Ukraine is a well-known topic in the Russian media, and various publications regularly sound the alarm when Ukraine carries out scheduled shutdowns of its nuclear power plants. The signing of the Energoatom-Westinghouse agreement was simply the last spark to spark a wave of misinformation about the supposedly “deplorable” state of the Ukrainian power plants.

“Any news from Ukraine’s nuclear power sector is received with a shudder. Transformers catch fire, turbines fail, the whole block comes to a standstill. Overall, the shadow of Chornobyl is dancing unrestrictedly through the country, ”writes the NewsFront publication.

“There are great dangers. In the years 2025-2027, the first Soviet-era power plants in the South Ukrainian and Rivne nuclear power plants will reach the end of their service life. They need to be shut down. You don’t have time to build something to replace it. The Ukrainian side will simply scoff at its own people, destroy industry as it has done for ten years, and tell stories of Russian aggression, ”writes Zhurnalistkaya Pravda.

Further examples and refutations of narratives about “constant fires and failures” in Ukrainian nuclear power plants can be found in the StopFake article “Fake: Western Scientists Predict 80% Chance of Nuclear Accident in Ukraine”. 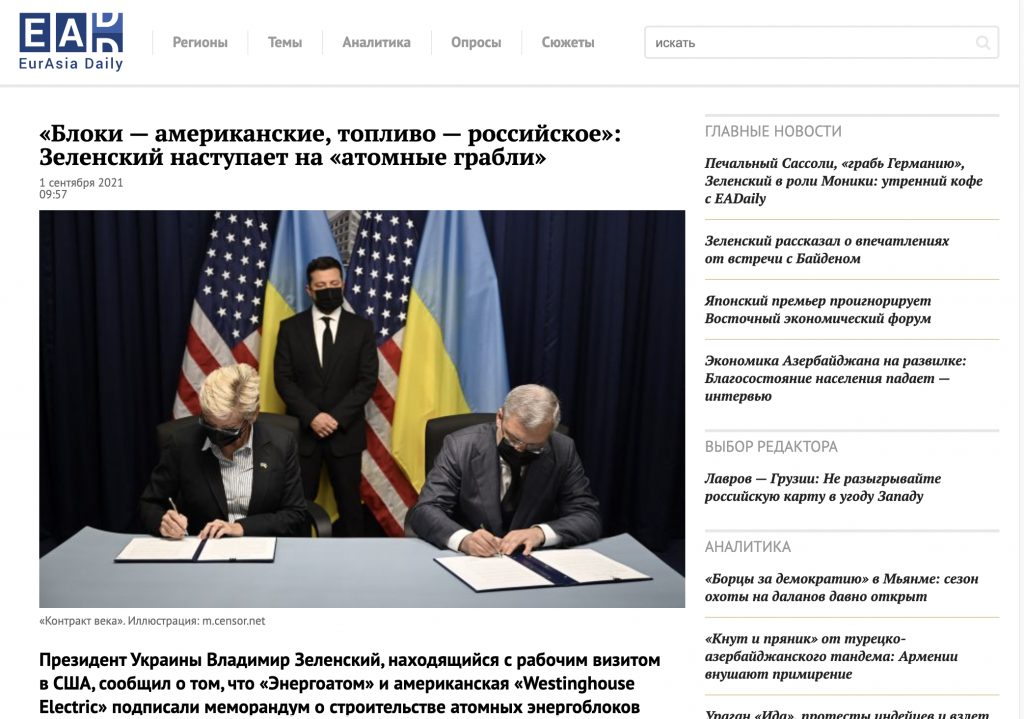 Ukraine’s efforts to diversify its nuclear fuel supply have always been subject to massive disinformation attacks from Russia, which is opposed to Kiev’s energy independence in every possible way. The number of attacks increased dramatically after 2014 when Ukraine signed a number of energy agreements with other countries, including the extension of an agreement on the supply of fuel for nuclear reactors by the American company Westinghouse. Even then, the Russian Foreign Ministry described the document as “unacceptable” and “dangerous”. After signing a new deal with Westinghouse, Russian media turned again to the old fake about the “dangers” of American nuclear fuel.

“So far Westinghouse has only supplied Ukraine with fuel, but this fuel is not reliable … The use of Westinghouse fuel in Ukrainian nuclear power plants carries enormous risks from the point of view of nuclear safety for the entire region,” writes Pravda.ru.

Meanwhile, the Ekonomika Segodnya site claims that Ukraine, even with the increased participation of the Americans, is not in a position to do without Russian nuclear fuel, nor does it have the capacity to produce the fuel itself.

All of these claims by the Russian media are obviously false, half of Ukraine’s nuclear power plants are currently powered by assemblies supplied by Westinghouse. For 20 years these assemblies have proven to be safe and efficient. For a detailed analysis of this narrative, see the StopFake story. The Westinghouse Treaty will turn Ukraine into a radioactive zone. 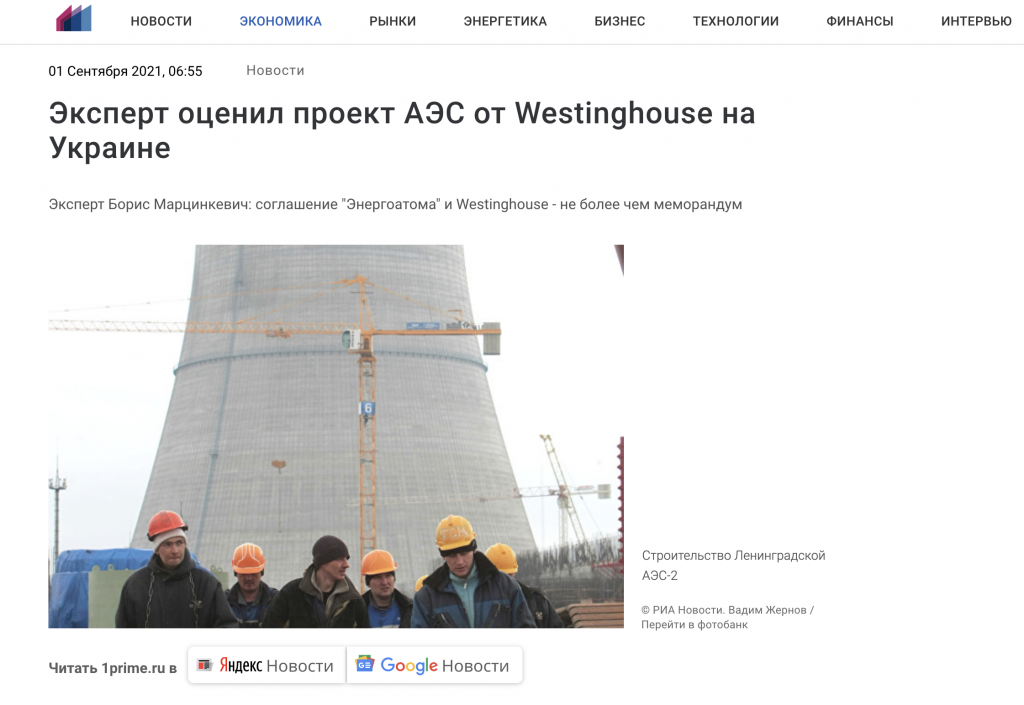 In the event of a complete refusal to cooperate with Russia on nuclear energy, Ukraine will become a “nuclear burial ground”, predicts several Russian media outlets.

“It should be noted that if these plans are carried out, all nuclear waste from Westinghouse reactors in Ukraine will not be returned to the US as it is prohibited by a law signed by President Ronald Reagan,” claims the editor-in-chief and head of Geoenergy Info, Borys Marcinkevich, in an article by the business news agency quoted Prime, a part of the state-run media holding Rossiya Segodnya.

Russian media and their experts talking about nuclear waste that will flood Ukraine are missing a very important and outstanding detail: Ukraine is obliged to dump the waste from its nuclear power plants on Ukrainian territory. According to the Joint Convention on the Safety of Spent Fuel Management, the first treaty of the International Atomic Energy Agency (IAEA) to regulate the management of radioactive waste on a global basis, the signatories are obliged to primarily store nuclear waste where it was produced. Ukraine ratified this treaty in 2000.

The anger of Russian experts is understandable, as Moscow is losing money that Ukraine would otherwise pay for the storage of spent fuel in Russia. Ukraine’s existing nuclear power plants were built in Soviet times when the USSR was a huge, centralized state and the only nuclear waste storage facility in Russia. Since Ukraine did not have such a facility on its territory, it had to pay Russia $ 200 million annually for the disposal, reprocessing and storage of spent nuclear fuel.

The construction of a central storage facility for spent nuclear fuel in Ukraine was a constant topic of discussion in the early 2000s. Various administrations have initiated plans and then suspended them. It was not until 2014 that the topic was seriously addressed again and design and development plans were drawn up. Construction began in November 2017 and today the facility in the Chornobyl Exclusion Zone is ready to receive, process and store spent nuclear fuel, freeing Ukraine from further Russian dependency, but also withdrawing significant funds from Moscow.

A detailed analysis of the Russian Ukraine as a nuclear burial site narrative can be found here.

Affair of the century and American dependence 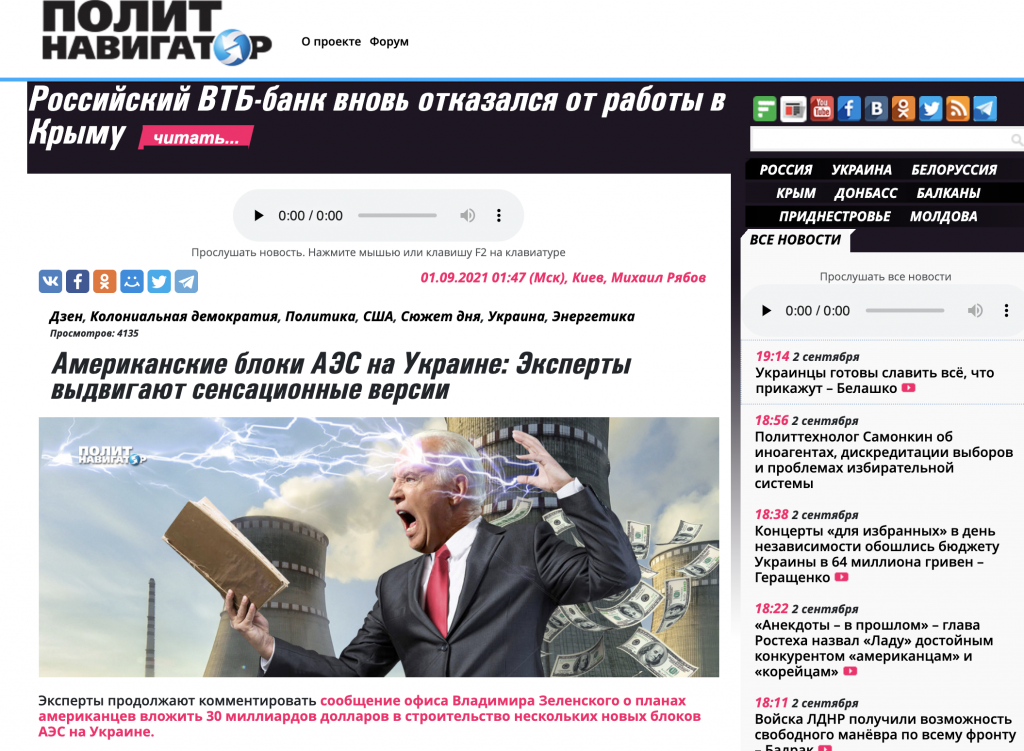 No Russian article on Ukraine would be complete without a stab about American dependence and the claim that Ukraine is a US colony controlled remotely from Washington.

“The deal of the century seems more like the scam of the century…. The separation of the cooperation with Rosatom (Russia’s state nuclear supplier) is considered energy independence. But how does it look in practice? Stop Soviet reactors and start American ones in their place? ”Writes the Kremlin-friendly Politnavigator.

“For the Americans, Ukraine is simply becoming a test site, which is already happening with uranium and fuel element deliveries,” said the RIAFAN Federalnoye Agentstvo Novostey.

“Technologies always follow investment, the world is pretty global before Ukraine was part of the Soviet Union and its economy and technology were deeply integrated into ours. Now, against the background of existing sanctions, it is trying to find other external partners who would support it, ”writes News.ru.

According to the publication Politnavigator, “Control of the entire energy sector of Ukraine will be given to the Americans. You start with the juiciest piece, nuclear energy. It has the lowest cost price, but it sells for the highest price. From now on, the Americans will collect electricity bills for several generations in advance. ”Russian propaganda keeps returning to the trite narrative that Ukraine is a colony of the West. The recent celebration of the 30th anniversary of Ukraine’s renewed independence has triggered an avalanche of such stories, the overview of which can be found in this StopFake story.

Revealed: The Five Dental Trends That Are Troubling Your Teeth