In the trend towards decarbonised societies, hydrogen is gaining in importance as a new energy source that does not emit carbon dioxide (CO2).

The only thing that is released when hydrogen is burned is water. Hydrogen also has a high heat capacity and generates electricity when used in fuel cells. It’s a shining star among energy options, but the question is what kind of hydrogen to use.

In fact, Japan has developed a hydrogen production technology that overcomes these disadvantages. The gas-cooled high-temperature reactor (HTGR) is the next generation of nuclear power generation, which can simultaneously produce unlimited amounts of hydrogen together with electricity.

The source of hydrogen is important

There are several technologies for producing hydrogen. The common method of mass production is “reforming”, which uses natural gas or coal as a raw material. High temperature steam is used to separate hydrogen from natural gas or other substances, but it also produces CO2 at the same time.

Ammonia, which has attracted attention as a new fuel option in recent years, does not achieve the carbon-free ideal because it uses hydrogen produced by this process.

Hydrogen can be obtained by electrolysis with solar energy. CO2 is not emitted, but there is energy loss. Pumped storage power generation has already been put into practice to store excess electricity.

Nuclear energy does not emit any CO2 either, but has been exposed to headwinds since the accident in Fukushima.

However, the Japanese Atomic Energy Agency is developing a new type of reactor called the High Temperature Engineering Test Reactor (HTTR) in the city of Oarai in Ibaraki Prefecture.

In principle, the HTTR is not prone to core meltdowns. In addition, it is the type of small modular reactor that the world is calling for.

One feature of HTGRs is that they use helium gas to create a high temperature of 950 degrees which is three times higher than that of conventional nuclear power. This high temperature can be used to power a gas turbine to produce electricity, while hydrogen is produced by thermochemical decomposition of water in a cyclical process that involves iodine and sulfur dioxide.

Commercialization of this reaction, called the IS (iodine-sulfur) process, was seen as problematic, but the HTTR research team achieved 150 hours of continuous hydrogen production two years ago – the standard for long-term operation. 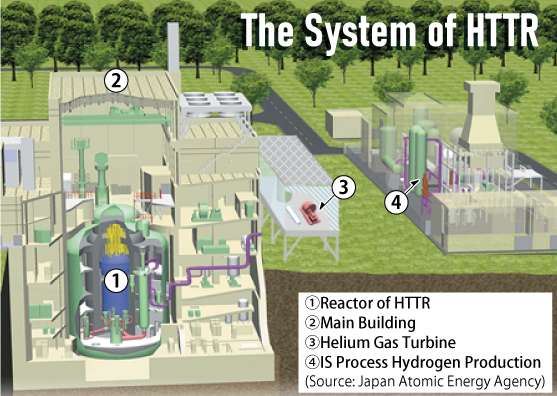 Diagram of an HTTR energy system with (1) the HTTR nuclear reactor (2) in its housing. (3) the helium gas turbine; and (4) hydrogen production using iodine and sulfur dioxide.

A reactor without serious accidents

The heat output of the HTTR is 30,000 kilowatts. Since it is in the first stage of development, it is not equipped with an electricity generator, but has all the basic functions of a gas-cooled high-temperature reactor.

The Ibaraki reactor was commissioned in 1998, but remained inconspicuous for years. This changed after the accident at TEPCO’s Fukushima Daiichi nuclear power plant ten years ago. At this point the new type of reactor became a beacon of hope.

The main reason for its recent attention is the excellent level of safety of the reactor. It is a novel type of reactor with a core material and structure that are completely different from conventional nuclear power plants.

In addition, HTGRs remain in the shadows for some time as they are structurally unsuitable as larger reactors. Now the global nuclear power market is turning to small modular reactors. This is the second reason for the recent attention. Since this type of reactor does not require water to operate, potential locations are wide-ranging, from inland locations to deserts.

The third reason for renewed interest is the growing demand for hydrogen as an energy source after the Paris Agreement to Curb Global Warming.

Resumption of operations in summer

The HTTR is currently undergoing a security review by the Nuclear Regulatory Commission. Compliance with new regulatory standards was confirmed in June 2020 and approval of the construction plan is underway. If construction work goes smoothly, operations are expected to resume in summer 2021.

After a full decade of being shut down after the accident in Fukushima, a light has finally become visible at the end of the long tunnel.

The Paris Agreement came into effect in 2020 and the world is rapidly moving towards a decarbonized society. While the Japanese government has declared its intention to bring its domestic and international CO2 emissions to zero by 2050, it is clear that this goal cannot be achieved by producing renewable energy sources such as solar energy, Japan’s main energy source.

This winter’s cold spells and heavy snowfall exposed the weaknesses in solar power generation. In addition, thermal power generation, which had made up for the lack of nuclear power, experienced delays in the procurement of natural gas, leading to severe blackouts.

In contrast to Europe, the stable power supply in an island nation like Japan requires diversification of energy sources. Nuclear energy plays an important role and can be operated without interruption for more than a year after the reactor has been filled with fuel. The trauma of Fukushima, however, has made both the construction and expansion of conventional nuclear power plants (light water reactors) problematic.

For this reason, the commercialization of serious accident-free HTGR is urgently needed. Japan is currently the world leader in HTGR technology. Both Poland and the UK have strong expectations for technical cooperation with Japan.

At the climate summit planned by US President Joe Biden, Prime Minister Yoshihide Suga was to present Japan’s gas-cooled high-temperature reactor as a hydrogen-friendly innovation in decarbonization to leading politicians. It would send a very meaningful message.

(Read the report in Japanese at this link.)