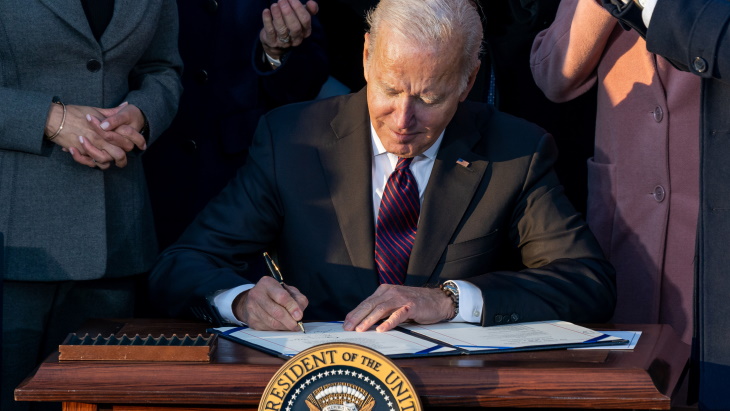 US President Joe Biden yesterday signed the bipartisan Infrastructure Investment and Jobs Act (also known as the bipartisan Infrastructure Deal). The $ 1.2 trillion package is a key part of the president’s Build Back Better agenda, totaling more than $ 62 billion for the US Department of Energy (DOE) to build a “fairer future for clean energy.” including preventing premature decommissioning of existing nuclear power plants and investing in advanced nuclear projects.

The bill, described by the White House as a “one-time investment in our nation’s infrastructure and competitiveness,” was passed by the Senate in August and the House of Representatives earlier this month. Among other things, it is providing US $ 6 billion to prevent the premature shutdown of existing carbon-free nuclear power plants. This funding through the Civilian Nuclear Credit program will be available to power plants that would otherwise be retired and certified as safe to continue operating, and will prioritize power plants that use domestically produced fuel, the DOE said.

“Our country already gets 27% of its electricity from decades-old nuclear and hydropower plants. These are critical sources of clean electricity – but as they get older and more expensive to maintain, we risk losing these important sources of pollution-free energy and well-paying jobs. The bipartisan infrastructure contract provides funds to ensure we can keep these clean energy sources online, “the DOE said.

The deal also provides approximately $ 21.5 billion in funding for clean energy demonstrations and research centers focused on next-generation technologies needed to meet the U.S. goal of net zero by 2050 . The vast majority of this is for clean hydrogen ($ 8 billion) and carbon capture, direct air capture and industrial emissions reduction (more than $ 10 billion), with $ 2.5 billion for advanced nuclear power through the Advanced Reactor Demonstration Program (ADRP) of the DOE are planned.

The ARDP was launched by the DOE in 2020 to accelerate the demonstration of advanced reactors through on-cost partnerships with U.S. industry. In October 2020, two companies – Terrapower and X-energy – were selected by the DOE to demonstrate their advanced reactors by the end of the current decade. X-energy signed a collaboration agreement with ARDP and the DOE for the project earlier this year that will enable the company to partner with Energy Northwest for a commercial facility with its Xe-100 advanced high temperature gas reactor in Washington state build.

X-energy said yesterday the signing of the infrastructure bill is a “strong indicator” of government commitment to the policy direction and financial investment required to get the reactors up and running as soon as possible.

“This is massive federal government support for the first commercial use of X-energy in Washington State and the opportunity for advanced nuclear power to help create jobs and rebuild US infrastructure,” said Clay Sell, CEO of X-energy. “We are very grateful for the continued strong bipartisan support from Congress and the President.”

Arshad Mansoor, CEO of the Electric Power Research Institute, said the bill is a “strong signal” as the US works towards a clean energy future. “It is making historic investments to help expand EV and grid infrastructure to ensure greater reliability and resilience, and to drive essential R&D into hydrogen, nuclear and other clean energy sources,” he said. “The power sector will play a critical role in meeting the US government’s climate goals as many sectors of the economy – including transportation, buildings and industry – will play an important role through electrification and other low-carbon energy strategies in which electricity will also play an important role.

“As we now lay the foundations for macroeconomic CO2 reductions in the decades to come, it is important to ensure that the transition to clean energy is fair and sustainable, while making electricity accessible, affordable for consumers in the US and around the world and remains reliable. “