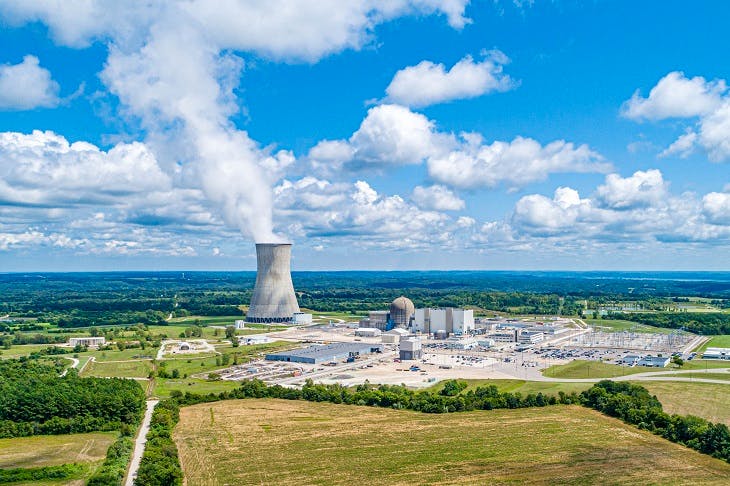 Nuclear: the age of immortal energy

Written in 1994 by American nuclear physicist Alvin Weinberg, his words remain starkly accurate in 2022. He was part of the 1942 Eugene Wigner team tasked with creating nuclear reactors and enjoyed a long and successful career leading energy projects and research boards. For those who demand ‘expert opinion’ before entering a debate, Alvin Weinberg is the closest thing you will find to the ‘father of nuclear energy’.

The entirety of his life was spent frustrated by ideological zealots who pretended to be at the forefront of a technical revolution but in reality tossed anchors off the side of civilisation, forcing progress to drag its keel along the rocks and shoals of predatory billionaires who had armed themselves with ‘virtue’.

In particular, Weinberg realized that in the creation of nuclear energy, humanity had discovered the secret to ‘immortal energy’. That is, a near-infinite source of fuel residing within a relatively tiny energy system. Unlike renewables, it does not require the continuous rape of rare minerals and conversion of the natural landscape into an array of whirring blades and bug-roasting platforms.

Watching the lifespan of nuclear increase to a comfortable 60-100 years, with the potential to build plants designed to double this, Weinberg compared the ongoing cost of nuclear to America’s large hydro dams. The longer nuclear plants remain in operation, the cheaper their electricity becomes with costs essentially dropping to the price of fuel, staffing, and limited maintenance.

The great lie of renewables – that they are cheap – is disposed of in their taxpayer-subsidised births and woefully short lives that end in landfill where they create literal mountains out of activist greed and public folly.

Weinberg’s suspicion that nuclear plants would be refurbished to extend their lives due to the failure of solar was kicked into gear following Russia’s invasion of Ukraine. Europe, realizing that green energy is all fun and games until Russian cuts off its pipelines, had to admit that solar and wind were not sufficient to keep its cities alight.

Currently, one-quarter of the European Union’s energy is derived from nuclear power. Crucially, nuclear provides a significantly higher proportion of base-load energy to stabilize the increasingly irregular grid. Prior to war in Europe, energy boards assumed that solar and wind would cannibalize the grid until nuclear and gas became irrelevant. Like a climate catastrophist’s imaginary apocalypse, Russia forced Europe to put its cards on the table at which point the world discovered a gaping energy hole.

Plenty of politicians in Europe have ignored this problem and are pushing ahead, shouting from their climate pulpits that this ‘free’ energy is the future. However, as Russia cut its pipelines, so too China can close its rare earths mines. If a Pacific conflict were to break out, or if Putin asks Xi Jinping nicely over a class of Chianti, those ‘green farms’ become like the arms of Mao’s starved populace, stretching out of the ground as makeshift gravestones to Utopian failure.

Back in 2018, I made a bet with a commentator (who will remain unnamed) that the vandalization of the nuclear industry by the United Nations and European Union would be temporary. From the outside, it looked as though political forces were artificially devaluing the sector leading to the changing hands of crucial energy assets. After this, I speculated a shift in policy that would reinvigorate nuclear assets as green saviors. It happened in 2019, when the UN proudly tweeted that to combat Climate Change, nuclear would become key for Climate Action. By July of 2022, even Brussels had signed off on nuclear as a green, sustainable energy.

Looking more closely at what happened during this period, it’s clear to see there were fortunes to be made via inconsistent energy politics.

In 2017, Germany set itself the goal of closing all nuclear power by 2022. As part of this pledge, E.ON and EnBW began prematurely decommissioning nuclear plants. The decommissioning business raked in cash by voluntarily robbing Europe of crucial energy supplies. Belgium and Switzerland were also aiming to shut down their plants by 2035. The market value of shutting down Europe’s nuclear energy is estimated at $81 billion euros. Vattenfall, a Swedish energy company operating nuclear plants, took the German government to court for $4.7 billion euros in damages earlier in 2011 when political phase-out orders were first announced. Vattenfall, RWE, and E.ON eventually sought $19 billion euros in compensation. By July of 2022, the German Parliament had reversed their decision, voting to both extend the life of nuclear plants and reopen coal-fired plants (yes, irony), however, the license for those nuclear plants is set to expire in December of this year creating yet another furious debate. It is a little hard to feel sorry for Germany and its sudden energy crisis, given they voluntarily closed 14 nuclear plants for political reasons.

During this time of uncertainty for nuclear, there were several high-profile takeovers. In 2017, EDF’s proposal to takeover New NP – Areva Group’s reactors – was approved. EDF were the largest nuclear operator in the EU and the acquisition gave them up to 75 per cent of the capital in New NP’s nuclear equipment business. EDF now runs a strong clean nuclear energy campaign while also operating wind, solar, and battery storage projects.

By 2018, we began seeing the emergence of negative press insisting that there was a ‘shift against nuclear’. Whether the public agreed is immaterial, the press decided to force the issue which in turn emboldened politicians. Those nations that left the nuclear fold, such as Belgium, have ended up with the largest and most expensive renewables projects. European Green parties joined the push against nuclear, seeking reports and studies which cast doubt on their ‘safety’, although in a disingenuous fashion.

Switzerland and Spain banned the construction of nuclear plants creating an artificial void in the energy markets. Many renewables projects were only commissioned due to the planned and unnecessary shutdown of nuclear which was then exploited. Even the World Economic Forum admits that it will cost Europe a further $3.8 trillion to convert to solar and wind and $1.5 trillion for clean hydrogen.

Cheap? Hardly. And that is only for the first build on 20-year lifespans.

There is no better place to see the failure of anti-nuclear policy than in Italy, who stand alone as the only European nation to follow through with the closure of their facilities. Their energy bills are out of control, rising seemingly without end. Today they are the world’s second largest importer of energy. A fresh petition has been suggested to send the country to a referendum on nuclear energy. In the meantime, it is considering re-opening old coal and gas plants in a complete contradiction of its so-called ‘climate goals’.

In other words, politicians wastefully spent tens of billions shutting down perfectly good nuclear reactors decades ahead of their expiration date which created a hole in the energy market that had to be ‘urgently filled’ with trillions of dollars of public investment in unreliable solar and wind the profits of which made hypocritical CEOs even richer. Unsurprisingly, their energy solution didn’t work, and so those same countries are trying to rebuild nuclear reactors to prop up the energy market.

These are the same people who lecture the public about ‘wasting energy’ when they put the air conditioner on or take their kids to school in a car.

What used to frustrate individuals like Alvin Weinberg was the interference of politics to the disadvantage of clean, cheap, reliable energy.

Australia is running a nuclear fiasco too, using legislation to lock nuclear out of the market while Labor passes policies such as the Climate Bill to force the shutdown of coal and gas. This creates a similar artificial energy hole that ‘has to be filled’ by expensive renewables to the filthy profit of billionaire investors who laugh their way both to the polls and the bank. Were nuclear to enter Australia’s energy grid, it would be the end of Deceitful politicians who built their careers on green promises.

Should we fail to embrace nuclear while maintaining our devotion to the anti-fossil fuel rhetoric the first world will swiftly find its standard of living deteriorate. The trappings of an easy life require cheap and plentiful energy. Perhaps this is why both the United Nation and World Economic Forum are ‘preparing’ people to ‘have less’, ‘eat less’, and ‘pay more’ for the things they used to enjoy. They are conditioning us to accept that environmental responsibility means a return to the peasant class.

As Alvin Weinberg lamented, it was one of his research papers that triggered, in part, global warming hysteria despite that not being his conclusion.

‘I had been on the periphery of the carbon dioxide question ever since my tenure on President Eisenhower’s Science Advisory Committee. In 1965 Roger Revelle had called to the government’s attention, in a PSAC report, S. Arrhenius’ and TC Chamberlin’s old prediction that the continued burning of fossil fuel would eventually cause the earth’s climate to war by some 2°C. […] had observed that man’s continued increase in the use of energy would eventually raise the earth’s temperature – but only a very little, since we all assumed the energy would eventually be nuclear, which produces almost no carbon dioxide.’

Sadly, Alvin Weinberg died before witnessing Europe’s sudden revelation about nuclear. He may have been pleased to find his predictions about energy systems proved right.

Australia can and should learn from Europe’s wasteful misadventure – although I guarantee that we won’t. Our nuclear debate is dominated by outdated and juvenile screeching that is either irrelevant or not applicable to the technology proposed. Eventually, as with Europe, the brick wall of reality will force the government to either adopt nuclear or fall back on coal. No doubt it will have something to do with China bullying Australia over its Pacific politics.

‘We nuclear people have made a Faustian bargain with society. On the one hand we offer […] an inexhaustible source of energy. Even in the short range, when we use ordinary reactors, we offer energy that is cheaper than energy from fossil fuel. Moreover, this source of energy when properly handled is almost nonpolluting. Whereas fossil-fuel burners emit oxides of carbon, nitrogen, and sulfur … there is no intrinsic reason why nuclear systems must emit any pollutant except heat and traces of radioactivity. But the price that we demand of society for this magical source is both a vigilance from and longevity of our social institutions that we are quite unaccustomed to.’

The problem is humanity turned out to be less trustful than your average Faustian demon. When forced to choose between profit and progress our answer is always political power.

Alexandra Marshall is an independent writer. If you would like to support her work, shout her a coffee over at the donor box.

Got something to add? Join the discussion and comment below.

Russia, Türkiye to Use Rubles for Gas Supplies, Replacing US Dollars