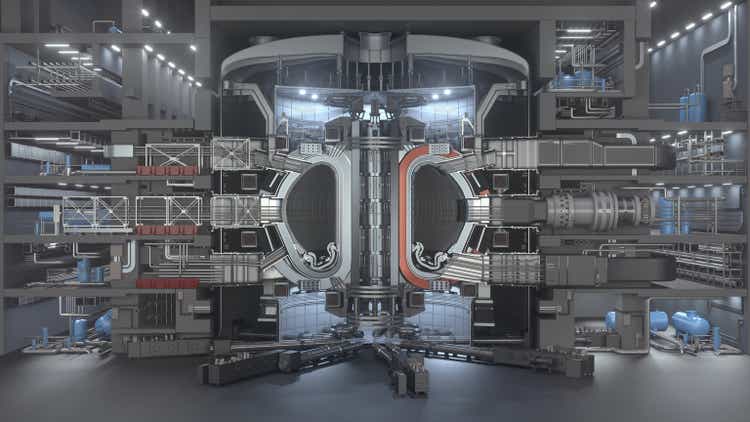 NuScale Power (NYSE:SMR) is attempting to bring a decades-long desire to make small modular reactors a reality. The idea sounds great: Design one small, scalable, cost-efficient nuclear reactor – and then build many of them to achieve economies of scale and help solve the massive challenge of global warming. Engineers have been working for decades for such a solution and NuScale appears to have the best chance of breaking through. I say that, because, in 2020, SMR became the first and only company to have received an SMR design “standard design approval” from the US Nuclear Regulatory Commission (“NRC”). But is that enough for NuScale to actually achieve widespread adoption of SMRs and does it pose and attractive investment opportunity? Let’s take a closer look.

Having a small, cost-efficient, scalable, reliable, and safe module reactor design would be great. Such an SMR could be used to satisfy relatively small-scale demand and also be scaled up to solve large-scale demand – both relatively quickly and in an economical way. In an era of seemingly runaway global warming, an affordable zero-carbon source of electrical power is obviously very desirable. Repeated production of a single design SMR should bring economies-of-scale throughout the supply chain and keep costs affordable. 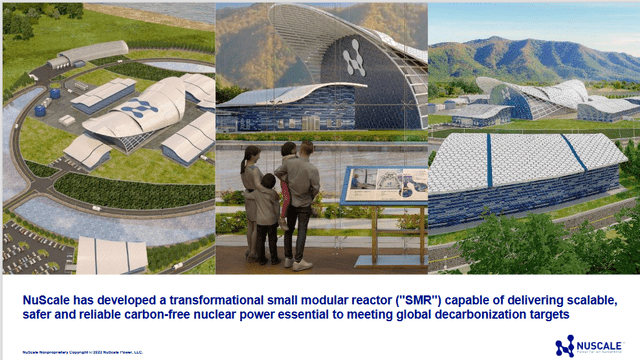 And that’s just what NuScale has in mind when it designed its NuScale Power Module (“NPM”). Each NPM is capable of generating 77 megawatts of electricity (“MWE”) and can serve as a reliable, carbon-free source of baseload electrical power generation that can serve as backup for renewable wind, solar and hydropower generation. In addition, the business plan is to enable multi-NPM configurations to satisfy larger utility baseload use-cases and, by growing volume, eventually achieve economies-of-scale:

In May, NuScale Power completed its merger with Spring Valley Acquisition Corp Transaction and reaped ~$380 million in gross proceeds. Those proceeds included $235 million from financial and strategic investors via public equity (“PIPE”) investors, including:

The money raised exceeded the $200 million NuScale estimated it needed to keep going through 2024.

fluorine (FLR), which has been working with NuScale since at least 2013, will continue to hold a majority interest in the company (~60%) and provides NuScale with engineering services, project management, administrative and supply chain support.

NuScale’s anchor project is with Utah Associated Municipal Power Systems (“UAMPS”). The association has nearly four dozen members across the states of Utah, California, Idaho, Nevada, New Mexico, and Wyoming. The first power plant is to be built at the Department of Energy’s Idaho National Laboratory.

Meantime, NuScale is busy engaging and developing relationships in 10 countries, which in addition to the US include Poland, Romania, Japan, and Korea.

Recent technological achievements through June of this year include: 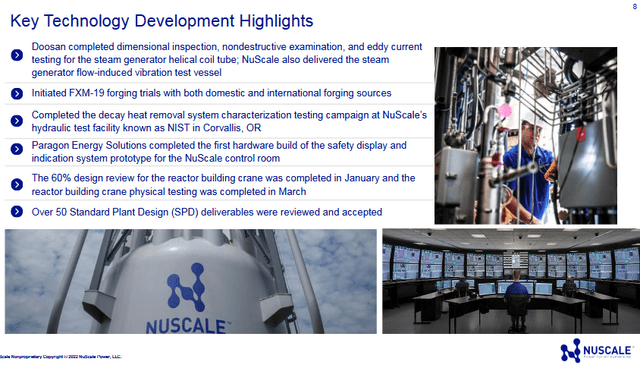 My sense is that many of NuScale’s potential utility customers are waiting for – what I consider to be the “proof-of-concept” plant – to be built in Idaho.

After a big jump in the stock price in July, NuScale currently has a $3.3 billion market cap (and a 13.7% short position): 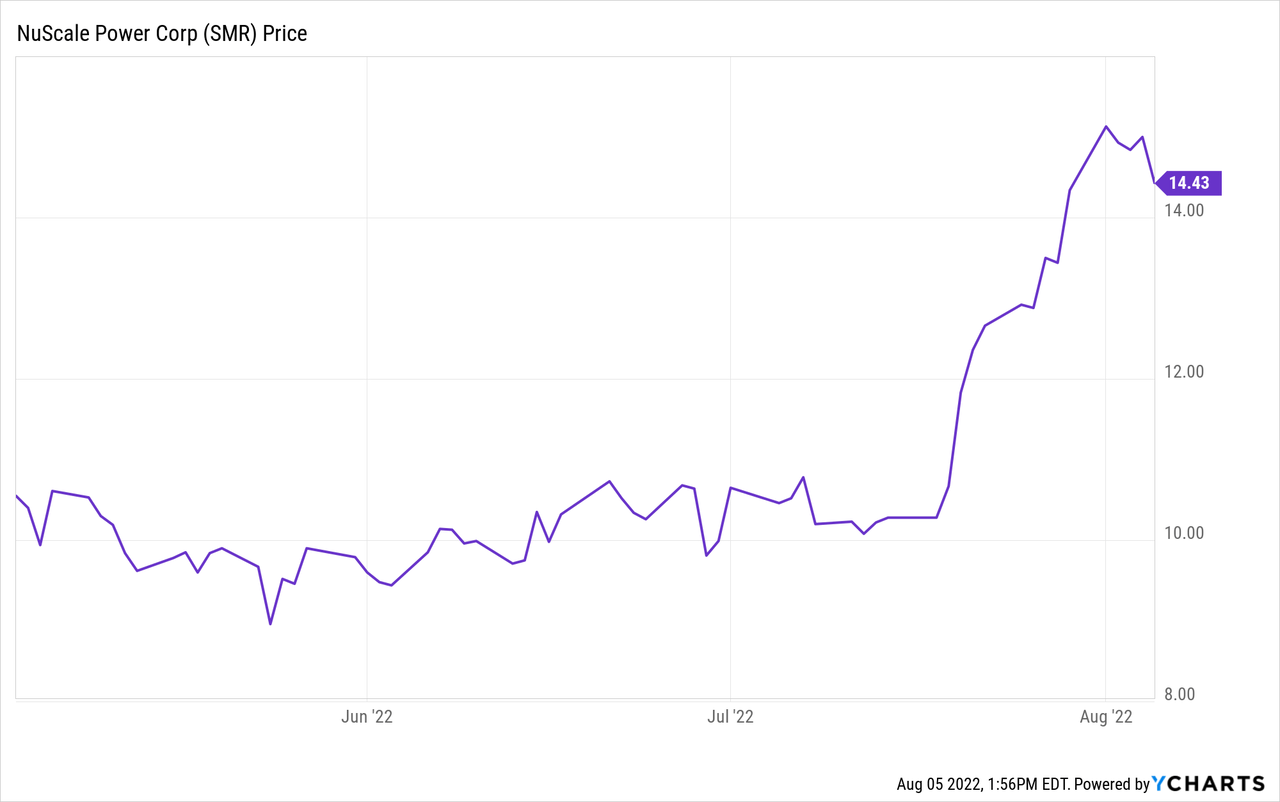 I saw no specific news for the jump in NuScale’s stock price. However, the entire clean energy space leaped higher in July based on speculation the Schumer/Manchin bill could actually pass through the Senate. The bill has lots of clean-energy related investment and, apparently, the thought is that SMR will be a beneficiary

In June, NuScale gave a financial update re-affirming guidance for (only) $16 million in FY22 revenue. For the three-month period ending March 31, 2022, the company reported:

Clearly the company is burning cash. However, even if the cash burn grew to, say, $30 million per quarter, the available capital would last more than three years.

However, NuScale has some big challenges. Back in 2020, several utility companies within the UAMPS group backed out of the deal to build the first NuScale SMR power plant. Even with the infusion of US federal dollars, NuScale announced that completion of the project would be delayed by three years to 2030 and estimated the cost had climbed from $4.2 billion to $6.1 billion. This is a familiar old song in the nuclear energy sector: Big schedule delays and big cost overruns. It was a big blow: after all, the whole idea behind a small scale modular nuclear plant was to reduce the risk of both schedule and expense.

According to the previously reference source, critics of the project said it will be “untenably expensive.” MV Ramana, a physicist at the University of British Columbia who works on public policy was not surprised that so many utilities backed-out of the project. “They (utility companies) ought to be seeing the writing on the wall and getting out by the dozens.”

The Department of Energy (“DOE”) previously agreed to $1.4 billion in funding for the project. However, as I reported above, the cost estimate for the project now is $6.1 billion. That’s a big gap in funding. Further, at that price, investors need to question whether or not renewable solar and wind capacity would be better back-stopped by battery backup, and more wind and solar capacity additions, as opposed to an SMR.

Meantime, I personally would be much more supportive of the effort if NuScale had a partnership of some sort, or at least a well publicized plan, to re-process or store spent radioactive fuel. That’s especially the case given that at least one study says that small nuclear power plants will generate more waste than conventional reactors. The report said SMRs would create up to 30x more radioactive waste per unit of electricity generated as compared to conventional reactors. According to Reuters, Lindsay Krall – the study’s lead author – said:

Even if (the US) had a robust waste management program, we think there would be a lot of challenges to deal with some of the SMR waste.

Further, and despite the seal of approval from the NRC, NuScale’s initial plant – like most all recent nuclear projects in the US – has seen a big schedule slip and a huge increase in its estimated cost. Combined with competition from renewable wind, solar, and battery backup, I just don’t see SMRs catching on. And even if an SMR were to get built, there’s still no solution to the problem of storing or reprocessing radioactive waste. Indeed, in the US, most nuclear power plants are storing spent fuel-rods on site because Congress has not solve the “not in my backyard” issue. Added to the hundreds of coal fly-ash storage sites across the country, the US has ticking environmental time bombs all over the place. Can it really afford to make the problem worse by deploying SMRs plants that, at least one study, generate up to 30x the amount of radioactive waste per unit of electricity as compared to existing plants? And, even if that answer is “yes” (I would not agree), is NuScale actually going to be a profitable concern some day given competition from real clean-energy wind, solar, and battery backup? I’ll pass on NuScale and rate it a SELL. That said, I do hope a solution for post-processing radioactive fuel and/or storing it will come sooner rather than later.