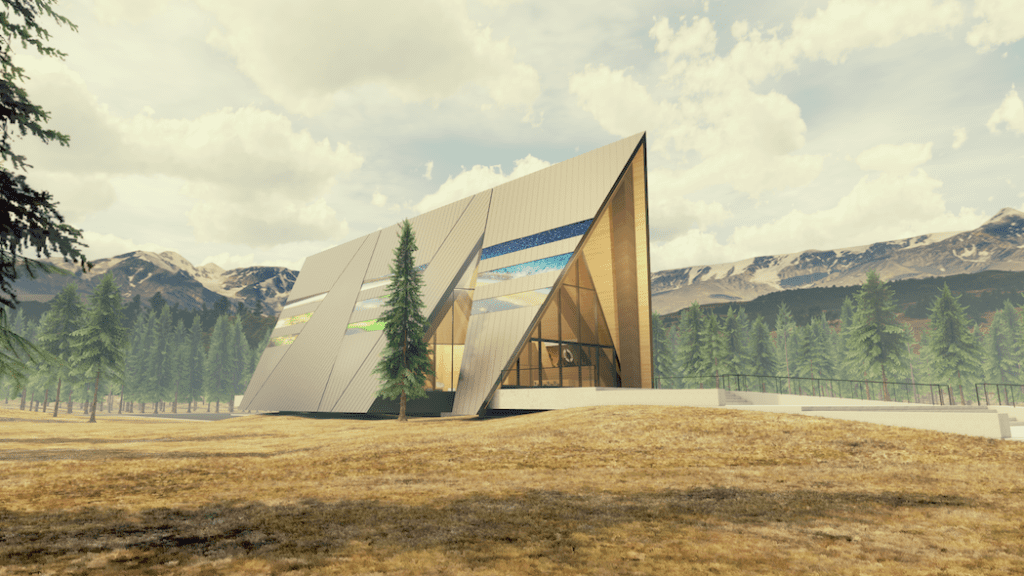 Oklo has kicked off regulatory activities for a first-of-its-kind nuclear fuel recycling facility that could produce commercial material from used light water reactor (LWR) fuel before the decade’s end.

The advanced nuclear technology firm in December submitted a licensing project plan (LPP) to the Nuclear Regulatory Commission (NRC) for its Fuel Recycling Technologies facility. The LPP essentially outlines the company’s plans for “pre-application engagement activities that support the future licensing of a first-of-a-kind fuel recycling facility,” the company said on Jan. 25.

While Oklo did not publicly disclose where it plans to site the commercial pilot fuel facility and how much commercial material it could produce on a pilot scale, the company said the privately funded commercial-scale fuel recycling facility would support the deployment of Oklo’s “advanced fission” power plants.

A rendering of the Aurora powerhouse, a 1.5-MW fission power system being developed by Oklo Inc. Source: Oklo Inc.

The Imperative to Secure Fuel, Address a Nuclear Cycle Gap

Oklo is in tandem developing plants based on its 1.5-MW Aurora microreactor design—a compact fast reactor. It says it has more than 750 MW of customer interest in signed memoranda of understanding and letters of intent, and it is actively evaluating 15 different sites. While the NRC in January 2022 denied Oklo’s pioneering combined license application (COLA) for a project the advanced nuclear developer plans to build and operate at Idaho National Laboratory (INL), the company in September 2022 relaunched its licensing process for the nuclear microreactor project.

Meanwhile, the company has to date won four Department of Energy (DOE) competitive awards for fuel recycling, including three awards granted in 2022. The four awards, which amount to about $17 million, “involve technology development in support of commercializing production of advanced reactor fuel from used nuclear fuel [UNF],” which is also referred to as spent nuclear fuel (SNF) or nuclear waste, the company said. In 2019, Oklo also notably received a first-of-its-kind site use permit to build its Aurora plant at the INL site in Idaho Falls, Idaho, and in 2020 became the first modern advanced reactor design firm to secure access to recycled high-assay, low-enriched uranium (HALEU) fuel from INL for demonstration purposes.

According to Jacob DeWitte, co-founder and CEO of Oklo, launching the first-of-a-kind facility that will recycle used fuel from other reactors, as well as Oklo’s own reactors, marks an important next step for the company. “The ability to economically recycle fuel is an important attribute for developing domestic fuel supplies, and offering recycling services also presents a sizeable opportunity,” he noted on Wednesday. “We are taking a major step forward in bringing meaningful fuel recycling capabilities domestically that will produce cost-competitive fuel.”

As POWER has reported in-depth, the effort aligns with renewed public and private efforts worldwide to explore recycling UNF from light water reactors (LWRs). While still rife with challenges, nuclear fuel recycling could both reduce the volume of high-level waste (HLW) that will require permanent disposal and potentially provide feedstock that could be used in domestic advanced reactors, the DOE has said.

“Used nuclear fuel can be transformed into an energy resource since used fuel is nearly 95% recyclable. The energy content in today’s used fuel can produce the country’s power needs for over 150 years,” Oklo noted. “Oklo’s commitment to domestic fuel supply infrastructure will help ensure advanced reactor fuel is produced economically and efficiently for its power plants.”

While Oklo’s plans to complete its planned Fuel Recycling Technologies by 2030 to meet market demand are notable, its efforts to blaze a new regulatory trail for nuclear fuel recycling are especially significant. In the U.S., four large commercial nuclear fuel reprocessing plant projects have been initiated, but only one commercial reprocessing facility was built and operated: Nuclear Fuel Service’s West Valley plant near Buffalo, New York. The facility ran from 1966 until 1972, but it never processed commercial SNF, and it was ultimately shuttered owing to stricter regulatory requirements.

And while the NRC in 2008 initiated efforts to assess and update its reprocessing regulatory framework, in 2016, it suspended work on Part 7x—a technology-neutral rule to address large reprocessing facilities (with an annual throughput of about 1,000 million tons of spent fuel)—owing to an “apparent lack of industry interest in constructing and operating a commercial spent fuel reprocessing facility in the U.S.”

While the NRC ultimately held a public meeting in 2020 to gauge industry interest in licensing, building, and operating a spent fuel reprocessing facility, it determined that interest was not near term. “[Nuclear Energy Institute] and industry representatives supported the continuation of rulemaking for clear and stable regulatory framework, but did not indicate plans to submit a reprocessing facility application in the foreseeable future (10-20 years),” the federal regulatory body said. “Other stakeholders did not want continued rulemaking because of proliferation and other concerns,” it added.

In March 2021, NRC staff recommended that the commission discontinue the SNF reprocessing rulemaking, suggesting it was not cost-justified “as there is limited interest expressed or expected from potential applicants for reprocessing facilities, including advanced reactor designers, in the near-term use of reprocessed spent fuel.” The commission approved the recommendation in June 2021.

In its letter to the NRC on Dec. 29, Oklo acknowledged its submittal of an application for a fuel recycling facility “would be the first in many years, therefore requiring alignment with NRC staff on approaches to complying with existing requirements.” However, the company added that it believes “there is a pathway to licensing a commercial fuel recycling facility through the NRC’s existing regulations and does not suggest a need for a rulemaking in this area.” Oklo said it is already engaging with NRC staff on fuel recycling and intends to use existing regulations “without delay.”

Oklo’s announcement also arrives as the race to integrate advanced reactors into future energy systems to support decarbonization is supercharging innovation in nuclear fuels. An array of research initiatives are underway to explore new ideas in moderators and coolants, along with other materials and fuels.

Significant attention so far has been heaped on tristructural isotropic (TRISO) particle fuel, the most mature advanced nuclear fuel concept. In December, Lynchburg, Virginia–based BWX Technologies initiated full-scale production of TRISO for the Project Pele microreactor, a Department of Defense project that will showcase the construction and operation of the first microreactor in the U.S. BWXT will manufacture a core for Project Pele and deliver the prototype microreactor to INL for testing by 2024. Fuel for the reactor will be down-blended from U.S. government stockpiles of high-enriched uranium (HEU) to HALEU and fabricated into TRISO fuel at the BWXT facility in Lynchburg, Virginia. So far, BWXT facilities are the only private U.S. facilities licensed by the NRC to possess and process HEU.

In October 2022, however, advanced reactor technology firm X-energy broke ground and began construction activities on its TRISO-X Fuel Fabrication Facility (TF3) in Oak Ridge, Tennessee. The NRC on Dec. 15 accepted TRISO-X’s application for its fuel fabrication facility. TF3 is set to be operational by 2025.

Metallic fuels are also garnering interest. Metal fuels, which comprise heavy metals (typically uranium) alloyed with various other metals for irradiation performance purposes, are considered well-suited for fast reactors because they have higher densities of fissile and fertile materials than other fuel forms. While also relatively mature, metal fuel is typically bonded to the cladding by liquid sodium to improve heat transfer characteristics. Research efforts of late have focused on developing fuel without sodium bonding. Sodium can be a reactive component and requires treatment before ultimate disposition. The DOE’s “Leading Innovation in Fuel Technology” initiative, for example, is working to support the qualification of metallic fuel technology and deliver a sodium-free metallic fuel option within five years.

Advanced reactor developers, however, have expressed concerns about how they will procure adequate supplies of HALEU, a form of uranium-235 fuel enriched to 20%. Many advanced nuclear reactor designs, including nine of the 10 designs awarded under the DOE’s Advanced Reactor Demonstration Program (ARDP), require HALEU. But currently, HALEU is available from only two sources: limited amounts from the DOE via down-blending of existing stockpiles of material, and from commercial supplies via TENEX, a nuclear fuel company owned by Russian state-owned company Rosatom.

In December, TerraPower President and CEO Chris Levesque warned that completion of its Natrium plant in Wyoming, a much-watched ARDP project slated to be operational in 2028, could be delayed. Levesque said, “given the lack of fuel availability now, and that there has been no [domestic] construction started on new fuel enrichment facilities, TerraPower is anticipating a minimum of a two-year delay to being able to bring the Natrium reactor into operation.”

As a prominent bright spot, the DOE in November 2022 awarded Centrus Energy a $150 million “definitized contract” to pioneer production of HALEU at its facility leased from DOE in Piketon, Ohio. Under the first phase of its contract, Centrus will finish construction of its American Centrifuge facility, bring the cascade online, and demonstrate production of 20 kilograms (kg) of 19.75% enriched HALEU by Dec. 31, 2023. Under Phase 2, Centrus will continue production for a full year at an annual production rate of 900 kg of HALEU. The DOE will own the HALEU produced from the demonstration cascade.

“However, the big lift is incentivizing a commercial supply chain [for HALEU] that doesn’t exist today. The classic ‘chicken and egg’ situation needs to be broken,” noted Andrew Griffith, deputy assistant secretary for Nuclear Fuel Cycle and Supply Chain, during a Nuclear Regulatory Commission (NRC) briefing on Dec. 8. “And we believe the government role is to establish that temporary demand signal to stand up that capacity.” Fortunately, with $700 million appropriated to HALEU efforts under the Inflation Reduction Act, the DOE has enough resources “to get started,” Griffith added. The funding will support criticality benchmarking and transportation package design adaptation, as well as support certificates of compliance. “Whether that’s enough or not still remains to be seen. I know there’s still work within the administration to get additional funding on that, as well as in Congress. So, we’re going to continue to work toward that end, because this is so incredibly important to be successful here,” he said.

For Oklo, the solution may lie in opportunities missed by the nation’s nuclear fuel open-cycle approach. “The fuel recycling facility will enable Oklo to convert nuclear waste from existing used nuclear fuel into clean energy, as well as to recycle fuel from Oklo’s plants, allowing for a dramatic cost reduction and solving for a key supply chain need,” DeWitte has said. “A commercial-scale fuel recycling facility will change the economic paradigm for advanced fission.”

Is Nuclear Power the Key to Transitioning to Clean Energy?