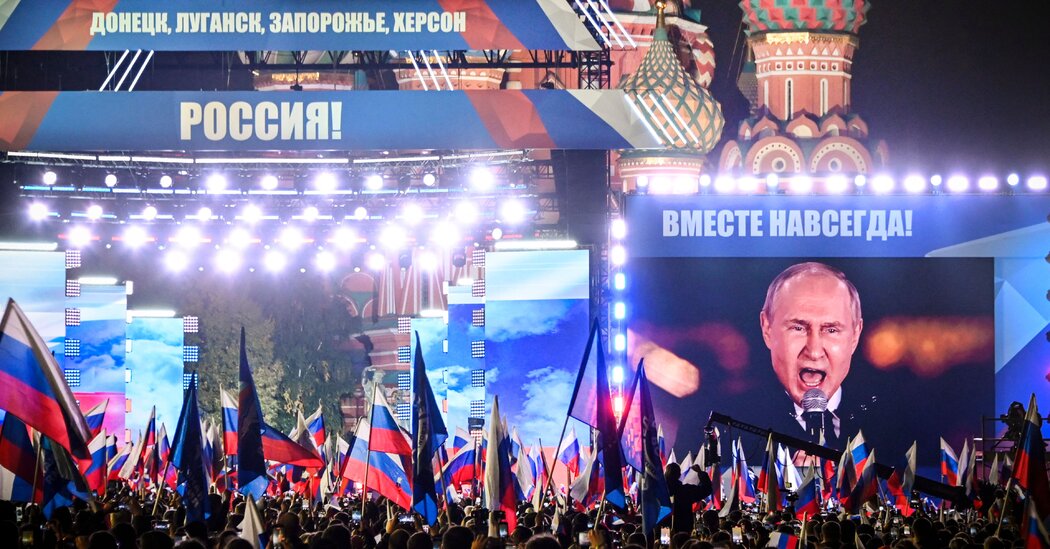 President Vladimir Putin of Russia, now backed into a corner by Ukraine’s battlefield successes and perhaps emotionally unstable, has threatened to use nuclear weapons to protect illegally annexed portions of eastern Ukraine, as well as to deter direct Western military intervention. The death and destruction from any such use would be widespread and indiscriminate, and might escalate into all-out nuclear war.

The threats seem to have worked. Otherwise, the US and its NATO allies might have come to Ukraine’s aid with conventional military forces to repel the Russian aggression. Thus, the very existence of nuclear weapons has extended the war in Ukraine indefinitely.

Mr. Putin’s nuclear extortion may not stop in Ukraine. He may now use the same threat to pave the way for a Russian invasion of the Baltic states or other NATO members. Or a despot in another nuclear-armed state may follow his example.

The only way to eliminate this risk — indeed, the risk to all of civilization — is to get rid of nuclear weapons. This won’t be easy or happen quickly. But the 2017 UN Treaty on the Prohibition of Nuclear Weapons provides a safe, verifiable way for all nations to achieve this goal. The United States should lead by example by joining the treaty in order to avoid more Ukraines in the future.

The silence of the religious community about the growing threats of nuclear war is absolutely deafening.

Unlike in the 1960s, when the church, the synagogue and other religious bodies took strong actions, well beyond words on paper, regarding the war in Vietnam, all we have today is a moral community missing in action.

From national assemblies to regional bodies to local church and synagogue congregations, I for one do not hear a single clear voice warning of a pending cataclysm.

We need a clarion call for nonviolence, demanding that both Russian threats and the US response warning Russia of “catastrophic consequences” be taken off the table, with a written commitment to “no first nuclear strike.”

Humanity itself is at stake. The faith community dare not sit this one out.

Our son, Jeremy, before he died last year at age 42 from amyotrophic lateral sclerosis (Lou Gehrig’s disease), was almost completely paralyzed and was confined to a 450-pound power chair that we controlled by a joystick mounted at the back.

In his book, “Never Say Invisible,” published posthumously, he talks about the discrimination and difficulties that the disabled encounter. He found that Americans With Disabilities Act compliance is a joke because a building just has to meet the bare minimum requirements to boast the ADA label, but there are still broken sidewalks, tight turns, unreachable elevator buttons, unusable restrooms, too narrow doorways, unopenable doors, etc.

We have a long way to go to true accessibility.

My husband was disabled after an automobile accident and spent the last 10 years of his life in a wheelchair as a quadriplegic. I still find myself, everywhere I go, assessing disability access. It’s become an ingrained habit. Sometimes I just shudder at what someone thinks passes as accessible.

Like the time a flight attendant proudly showed me a bathroom on the airplane that she said could handle a wheelchair. I asked her how my husband, who could not walk, was supposed to get to that “accessible bathroom” as his wheelchair was stowed below, and in any event the aisles were not wide enough to navigate in a wheelchair. The look on her face was priceless.

I do think every designer, architect and builder should spend a week in a wheelchair to better understand the challenges. We all might be in one ourselves someday.

Re “2 Charged With Manslaughter in Shooting of Migrants Along a Texas Roadway” (news article, Sept. 30):

This horrific attack is the result of rampant political fear-mongering against migrants — human beings who have fled violence, persecution, economic devastation and climate disaster in search of a better, safer life for themselves and their children.

Amid a disturbing rise of “great replacement” rhetoric, this tragedy is only the latest example of xenophobia turned fatal. In the past three years alone, the communities of Buffalo, NY, and El Paso, Texas, have witnessed 33 people murdered at the hands of mass shooters fueled by anti-immigrant hatred.

Our political leaders have a responsibility to set an example in their words and in their actions. When they use “illegals” as a noun, or when they transport asylum-seeking families under false pretenses to score petty partisan points, they contribute to the dehumanization of vulnerable people and embolden a violent brand of vigilante nativism.

Reasonable Americans may disagree about immigration policy. But if our nation is ever to reform its deeply dysfunctional system after decades of congressional inaction, the path forward must begin with a recognition of our shared humanity.

Krish O’Mara Vignarajah
Gaithersburg, Md.
The writer is the president and CEO of Lutheran Immigration and Refugee Service.

In my town north of Seattle, land and construction prices are so high that no matter how many homes fit on a lot and no matter their size or simplicity, it is not possible to build a home that a household with a moderate income can afford. This means that most essential workers are shut out — teachers, emergency service providers, health care workers and the next generation without support from parents.

What are the solutions? In addition to allowing “missing middle housing” (duplexes, triplexes, cottage courts, etc.) in residential neighborhoods, I think partnerships with nonprofits and community-based groups open opportunities.

These and more solutions are needed. A healthy, thriving community must have homes for residents of all incomes.

Ross Chapin
Langley, Wash.
The writer is an architect.

“My Ride in Our Driverless Future” (Sunday Business, Oct. 2) describes what may be the perfect example of a triumph of technique over purpose: the driverless car. Fortunately, it may not be in our future for a considerable time, because of its extraordinary liability costs.