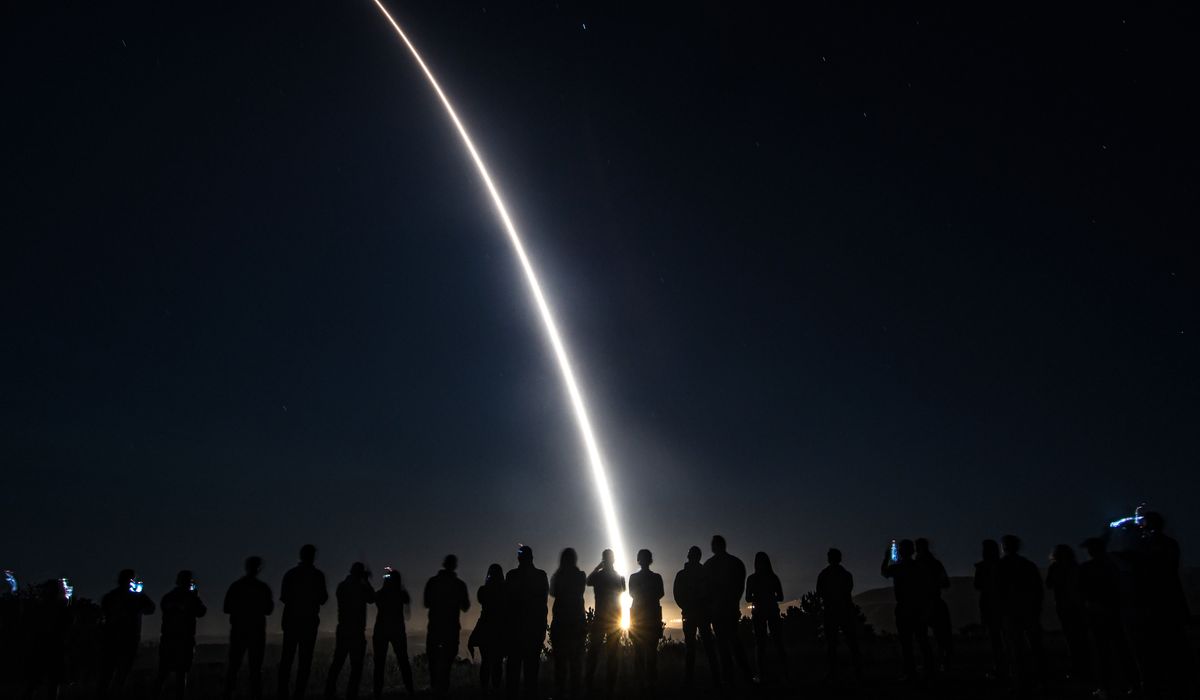 The Air Force has flight-tested a Minuteman III ballistic missile that practiced launching multiple nuclear warheads, after twice delaying the exercise amid tensions with global rivals.

The aging, long-range missile was launched from California’s Vandenberg Space Force Base early Wednesday and delivered three multiple, independently-targetable reentry vehicles, or MIRVs, during the test, the Air Force Strike Command said in a statement.

The missile test was part of routine testing for the US land-based nuclear deterrent force, a system under increasing stress as a result of China’s rapid buildup of nuclear forces and Russia’s modernization of its nuclear arsenal with new missiles and cutting-edge strike weapons.

The Minuteman III test had been planned for earlier this year, but was delayed twice by the Pentagon over fears the launch would prove too provocative to Moscow and Beijing.

The test was originally scheduled for March but was put off by Defense Secretary Lloyd Austin in March in the wake of Russia’s decision to invade neighboring Ukraine just weeks earlier. Mr. Austin then delayed the launch a second time last month amid heightened tensions with China over House Speaker Nancy Pelosi’s visit to Taiwan.

White House National Security Council spokesman John Kirby said at the time the August delay was “the responsible thing to do” in seeking to lower tensions with Beijing.

Vandenberg said in a statement that the test had been scheduled “years in advance” and that the Russian government was notified ahead of the test under the terms of the New START arms treaty.

The Strategic Command suggested in a tweet that the test launch was successful. “This test demonstrates the US’s nuclear deterrent is safe, secure, reliable and effective,” the command said on Twitter.

“The test went as planned, so it was nominal,” a Strategic Command spokesman said.

The Minuteman III has been a key element of strategic forces for more than 50 years as the land-based leg of the nuclear “triad” of missiles, bombers and missile submarines. The Global Strike Command statement said Wednesday’s test was standard and not linked to current world events.

During the test, three inert warheads separated from the missile’s last stage in space shortly after launch and traveled 4,200 miles to an impact site on Kwajalein Atoll in the Marshall Islands. The Minuteman III is slated to be replaced by a new ICBM designated the LG-35A Sentinel, which is scheduled to be deployed in 2029.

“Until full capability [of the Sentinel] is achieved in the mid-2030s, the Air Force is committed to ensuring Minuteman III remains a viable deterrent,” the Air Force statement said.

“When deterrence is essential but also uncertain, we are in a rough place; we must work to hedge against those uncertainties as best we can,” he said in a recent speech to the Hudson Institute.

Russia has modernized its nuclear forces with new heavy ICBMs, a nuclear-powered nuclear cruise missile, hypersonic missiles and a nuclear-tipped drone submarine, while the commander of the US Strategic Command called China’s recent nuclear arsenal expansion a “breathtaking” breakout of a small nuclear force into a major nuclear-armed force.

The US only recently learned of an estimated 350 ICBM silos under construction in western China that officials say will be filled with new DF-41 multi-warhead nuclear ICBMs.

“Today’s [Minuteman] launch sends a visible message of assurance to our allies, and I couldn’t be more proud of the mission of continued deterrence this launch represents,” said Air Force Col. Christopher Cruise, commander of the 576th Flight Test Squadron.

Missile test data is used by the ICBM community, including the Pentagon, Energy Department, and Strategic Command, for force development, the Strike Command, located at Barksdale Air Force Base, Louisiana, said. The Strike Command, with 33,700 troops, is in charge of three ICBM units, and the strategic bomber force of B-52s, B-1s, B-2s and soon the new B-21.