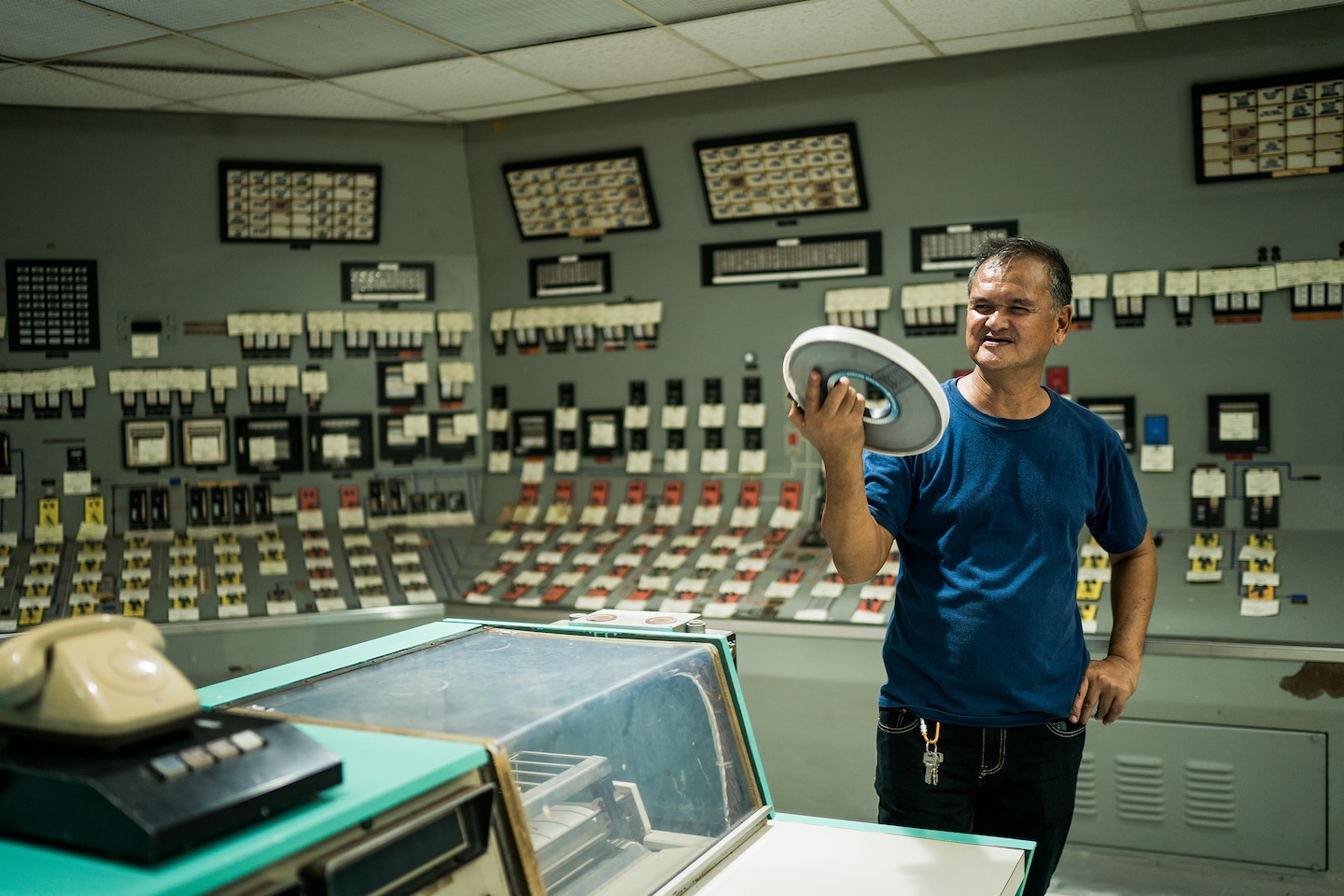 President Marcos looks to his father’s project, once dogged by scandal and safety concerns, as a solution to fossil-fuel challenges

BATAAN, Philippines — They’d grown old together, the nuclear plant and its caretaker.

Willie Torres had been there at the start in the 1970s, when the plant was still being built, a $2.3 billion project set to become Asia’s first venture into nuclear energy. He stayed on as a technician when the plant became dogged by scandal. And he remained as one of a handful of staff when, in the wake of the Chernobyl disaster, the government ordered it mothballed.

In the face of skyrocketing energy prices and the global push to slow climate change by moving away from fossil fuels, interest in nuclear power has surged anew in the Philippines and abroad. President Ferdinand “Bongbong” Marcos Jr. announced weeks after taking office last year that “it is time” to revisit nuclear energy and mused openly about reviving the decades-old Bataan nuclear plant.

The plan begun in the mid-1970s by the president’s father, dictator Ferdinand Marcos, was set by construction delays, cost overruns and charges that the Marcos family had taken bribes from contractors. When an independent commission concluded that the plant had “inadequate safeguards and could be a potential hazard,” opposition to the project grew. It was shelved in 1986 and its reactor was never turned on.

“It was a lost opportunity,” said Torres, 61. “Not just for me, but for the entire country.”

The plant, nestled in forested hills three hours outside Manila, became a monument to the excesses of the Marcos era. Swallows moved into its cavernous chambers and their gurgles echoed against the concrete walls. For decades, Torres held out hope that the plant would be reopened one day, and now, under Marcos, it might. Activists who once marched against the plant because of its alleged safety lapses are mobilizing their communities to fight again.

But the battlefield has changed.

How the Philippines’ brutal history is being whitewashed for voters

The site of dozens of weather-related disasters each year, the Philippines is one of the countries most vulnerable to the effects of climate change. Its coal-heavy energy sector accounts for half its greenhouse gas emissions, placing the nation under mounting pressure to find new sources of energy. In the country’s legislature and on the global stage, nuclear power has found influential champions who argue it is the only energy source that will allow the Philippines to green its grid without having to slow growth.

Some energy experts aren’t sure that nuclear power makes sense for the Philippines, but their voices are increasingly being drowned out. On social media, the contentious history of the Bataan nuclear plant is being rewritten, said Veronica Cabe, an organizer at the Nuclear/Coal-Free Bataan Movement.

“Every day we see it,” Cabe said. “They’re turning the narrative.”

Across the world, governments are “rediscovering” the merits of nuclear power, said Henri Paillere, head of planning at the International Atomic Energy Agency.

Germany in October extended the life span of nuclear plants after once vowing to phase them out. France is building new reactors even though its existing nuclear infrastructure has been teetering at the edge of collapse. Japan recently said it would begin to “maximize” its atomic fleet, which had been scaled back after the 2011 Fukushima power plant disaster, when a powerful tsunami led to the release of radioactive material.

“We cannot achieve a clean-energy transition without nuclear power,” Paillere said, noting that last year the IAEA hosted its first pavilion at the UN Climate Change Conference. “But that doesn’t mean every country needs nuclear power.”

At least 30 nations, most of them emerging economies, are exploring how to add nuclear to their energy mix, Paillere said. Few, however, face a decision as pressing as the Philippines’.

Filipinos pay among the highest electricity rates in Asia, in large part because the country’s power is sourced from imported coal, which has grown increasingly expensive. With energy needs set to double over the next two decades, nuclear is the country’s best alternative because it can reliably supply a large amount of power, said Carlo A. Arcilla, director of the Philippine Nuclear Research Institute. Solar and wind energy, on the other hand, are “intermittent” based on what nature provides.

But Sara Jane Ahmed, an energy finance analyst who advises the Vulnerable Twenty Group, or V20, a coalition of countries most vulnerable to the effects of climate change, said nuclear plants are inflexible in their operation. They can’t accommodate fluctuations in energy needs caused by factors like shifts in weather, she said, and they can’t be “ramped up and down” to work with renewable energy.

It’s also costly to ensure that nuclear plants are safely operated in the Philippines, which, like Japan, is in a notoriously active seismic zone called the Ring of Fire. And when nuclear plants go offline, say because of a typhoon, the energy grid can be left crippled, causing brownouts, said Bert Dalusung, an analyst at the Institute for Climate and Sustainable Cities. Instead of a few large power plants, the Philippines needs a “distributed energy infrastructure” built on its ample supplies of solar, wind and geothermal resources, he said.

In a paper-stuffed office in Manila, a white-bearded, weary-looking Arcilla shook his head at these arguments. The institute director said that he supports more renewable energy but that it wouldn’t, by itself, be enough. The case against nuclear is irrational, he said, shaped too much by the history of the Bataan plant.

“By ignorance,” Arcilla added. “And politics.”

When Ferdinand Marcos Sr. decided to build the Bataan nuclear plant in 1973, the world was in the middle of an energy crisis sparked by the Middle East oil embargo. Marcos had just declared martial law, extending his rule past the constitutional limit and giving himself sweeping powers that he used to plunder the country’s coffers. A mass “People Power” movement eventually rose to oust Marcos, and when he fled the Philippines in 1986, his nuclear plant was left in limbo.

The subsequent government of President Corazon “Cory” Aquino was evaluating what to do with it when, in a small Ukrainian city in the Soviet Union, a nuclear reactor exploded. “If there were still any cobwebs of doubt,” Budget Minister Alberto Romulo told reporters at the time, “Chernobyl certainly sealed the fate of the Bataan nuclear power plant.”

It took the Philippines until 2007 to finish paying for the facility. Since then, there have been fleeting attempts to restart discussions over the plant, but none — until now — had drawn such intense interest from the country’s leaders.

“This is the first strong chance we’ve had in decades,” said Mark Cojuangco, a member of the House of Representatives and son of the late Dending Cojuangco, a billionaire who was close to the Marcos family.

Over the past 15 years, Cojuangco has tried twice to pass legislation to revive Bataan, bankrolled a pro-nuclear nonprofit group and hosted various foreign nuclear advocates in the Philippines, often personally paying for their plane tickets. Following Marcos’s election last year, Cojuangco was appointed chair of a new special committee for nuclear energy.

Vice President Harris announced in November that Washington had begun negotiations with the Philippines on a civil nuclear cooperation agreement — the first step in allowing American companies to sell nuclear technology to the country. It was a welcome move, Cojuangco said, but in December he held meetings with officials from China and South Korea, neither of which require government agreements to sell nuclear technology.

“Everyone,” Cojuangco said with a smile, “wants to help us.”

Everyone, it seems, except the politicians representing Bataan, who have said repeatedly that their constituents don’t support a revival.

Cojuangco’s expression shifted. “Grandstanding politicos,” he snapped, just like the ones in the 1980s.

In the lead-up to the 2022 election, the Marcos family sought to whitewash their history, crafting campaigns on TikTok and YouTube that portrayed their late patriarch as a leader who brought wealth and infrastructure, rather than debt and repression. A similar effort to remake Bataan’s image is now underway, said Cabe, the anti-nuclear activist.

Nuclear advocates have targeted younger Filipinos, she said, promising that the plant’s revival would create jobs and investment. They’ve cast the plant as an entryway to an industry of the future and denigrated the popular movement that once resisted it. On Facebook, pro-Marcos political groups have repeatedly shared a 2019 video that has been viewed more than a million times: “$2.3 billion project wasted by Cory Aquino to demonize Marcos.”

Dante Ilaya, 68, has watched these efforts in disbelief. As a young lawyer in the 1980s, he marched against the plant because of its safety risks, not because of politics. Those risks have not disappeared and may have arguably multiplied, he said. The idea that the government would look past them to rehabilitate a dictator is, he added, “abhorrent.”

In 2008, the IAEA said the plant would need to be “thoroughly evaluated” to be restarted. A more recent study concluded that it would cost roughly $1 billion to bring it online. How, Ilaya asked, could people trust that the process wouldn’t be subject again to mismanagement?

Ilaya and other community leaders, including some local priests, are trying to revive opposition to the plant. But they’re uncertain whether they’ll have the influence they did four decades ago.

Since the plant was shelved, four coal projects have been built in Bataan, nearly all against the wishes of local residents. Villages were displaced and waterways destroyed in the name of generating power for the country, Cabe said. Driving through a community that had been split apart by a coal plant, she glanced out the window.

“Hasn’t it been enough?” she asked.

An hour away, Torres was ending his day at the nuclear plant. He’d been 18 when he first arrived there and now he had wrinkles and gray hair. He’d dreamed for years of seeing the reactor switched on, but amid the most recent debate, he wasn’t always sure what to think.

Torres paced around a room of metal vessels and pipes meant to keep the reactor cool — and now rusty from lack of use. All this equipment would need to be replaced, he knew, and at a cost.