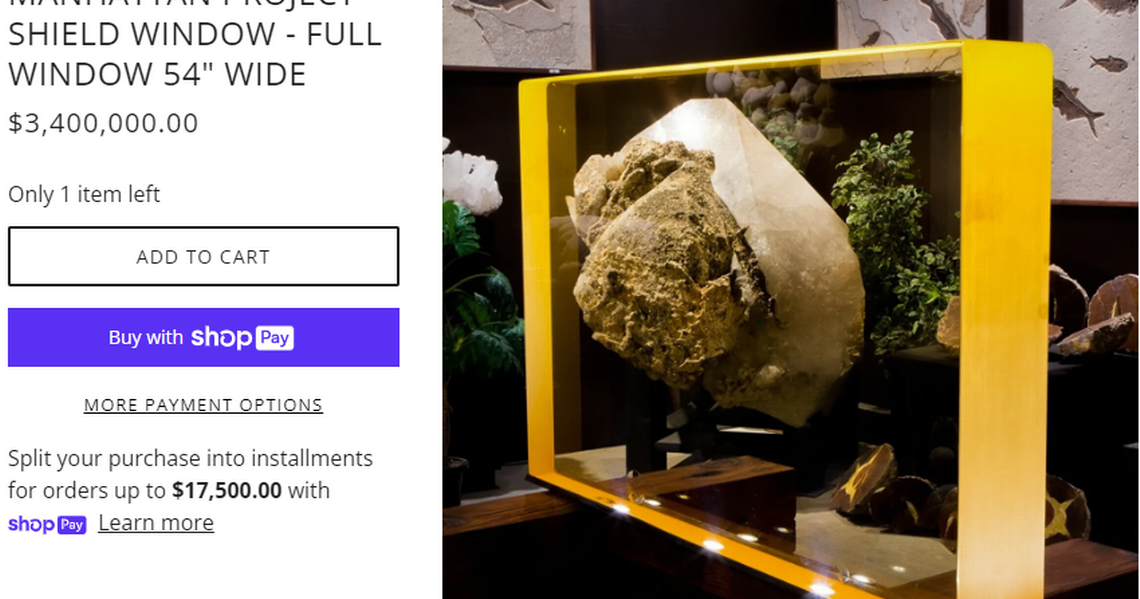 If you have $2.4 million to part with on Black Friday, you could own a piece of Hanford nuclear reservation history.

Minimuseum.com is offering a shield window it says is from the Hanford site’s historic T Plant at a $1 million discount off its usually asking price of $3.4 million, according to the sale website.

T Plant in the center of the Hanford site in Eastern Washington was the world’s first large-scale plutonium separation facility.

After construction was completed in 1944, it was used to chemically extract plutonium from fuel rods irradiated at the worlds’ first production scale nuclear reactor, Hanford’s historic B Reactor.

B Reactor is now preserved as part of the Manhattan Project National Historical Park.

The plutonium processed at T Plant was used for the Trinity Test in New Mexico in July 1945 and was used in the atomic bomb that was dropped on Nagasaki, Japan, on Aug. 9, 1945, helping end World War II.

T Plant ceased plutonium separation in 1956 and the next year began to be used as a decontamination, repair and waste handling facility.

“There is really nothing else like this window,” say the Mini Museum website. “It is a singular object in history that represents the shift to the Atomic Era.”

The 1,700-pound, 54-inch-long window was sold in a government surplus auction in the late 1980s, according to the site. It says it is the largest known complete window from the plant in private hands.

In 2014 Bonhams, a British auction house, put a WWII Manhattan Project shield window that appeared to be similar up for auction with a projected price of $150,000 to $250,000. The window, which had earlier been sold to a salvage operator for its metal casement, apparently did not sell at auction.

Since the early ’90s, Hanford officials have had agreements with state and federal historical preservation agencies to search out and save important items rather than letting them fall into private hands.

Mini Museum reassures possible buyers that the shield window it is selling is not radioactive. But they may want to be careful due to its high lead content, it says.

Leaded glass was used to protect workers from radiation on the other side of the window.

If $2.4 million is too rich for your blood, the site also offers glass fragments of smaller Manhattan Project shield windows starting at $29.