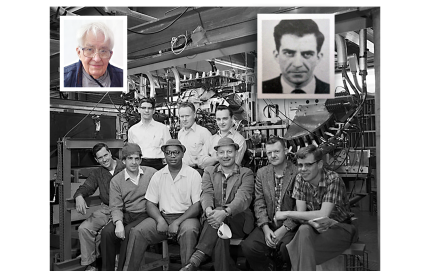 Wolfgang Stodiek, a pioneer in plasma physics and researcher who led the Princeton Plasma Physics Laboratory’s early research on experimental devices called tokamaks, died on March 7th in his family home in Bielefeld. He was 95 years old.

Among other things, Stodiek helped transform PPPL from fusion experiments on twisted-coil devices called stellarators into donut-shaped devices called tokamaks. Together with engineer Don Grove, he designed and supervised the conversion of the C-stellarator from PPPL to the symmetrical tokamak. He later led the Princeton Large Torus (PLT) experiment, the research results of which eventually led PPPL to embark on the famous Tokamak Fusion Test Reactor (TFTR) experiment.

Although Stodiek retired in 1996, he continued to work at PPPL two or three days a week until 2007 when the Stodieks returned to Germany to care for a sick relative. A memorial service was held in Germany on March 18.

“This was a major turning point in the lab’s research program to move from stellarators, invented by the lab’s founder (Lyman Spitzer), to tokamaks in 1969,” said Dale Meade, former deputy director of PPPL. “He was at the intersection directing traffic.”

Stodiek is survived by his 45-year-old wife Elsmarie Stodiek, whom he met on a PPPL tour in the 1970s and who found out they were from the same German city.

Stodiek was born on May 22, 1925 in Bielefeld in northern Germany. At the age of 17 he was drafted into the German Amy towards the end of the Second World War and briefly held in a British prisoner-of-war camp.

Stodiek studied physics at the Georg August University, a public research university in Göttingen. In 1950 he switched to the physicist Werner Heisenberg at the Max Planck Institute for Physics in Munich.

Stodiek learned about fusion energy when he attended the famous Atoms for Peace conference in 1958, where scientists worldwide first unveiled research on fusion energy and physicists from Princeton showed a model stellarator. The following year his institute sent him to Princeton to learn more. Stodiek stayed there for almost five decades.

Joins the Matterhorn project in 1959

When Stodiek first came to Project Matterhorn (renamed Princeton Plasma Physics Laboratory in 1962), he was working with other prominent early physicists at PPPL such as Robert Ellis Jr., the father of the chief engineer, on the Stellarator Model B-3 Bob Ellis.

“He was one of my father’s great friends,” said Ellis, who remembered playing with his sister in the front yard when a strange man drove up to the house and asked about his father. It was Wolfgang Stodiek who had stopped by to discuss plasma physics. “He was very passionate about his work in plasma physics,” said Ellis.

When Russian physicists announced that they had reached super-hot plasma temperatures of 10 million degrees Celsius with an experimental device called a tokamak, Stodiek, an expert in X-ray diagnostics, was among many who were skeptical. But British scientists confirmed these results in an article the following year, and PPPL decided to focus on tokamaks. In 1969, Stodiek was among those responsible for converting the Model-C stellarator into a tokamak.

“We have all lost a good friend and an excellent scientist,” said Ken Young, a physicist who worked with Stodiek in the 1960s. “His conversion of the stellarator to the ST tokamak was incredibly quick and it contributed enormously to the PLT. His understanding of all aspects of tokamak devices was second to none. “

Ned Sauthoff, former director of the US ITER Project Office, recalls meeting Stodiek in the control room of the Symmetric Tokamak (ST) when Sauthoff was a PhD student. Both Stodiek and Schweickhard “Schwick” von Goeler were Sauthoff’s advisors. “Wolfgang was a real mentor and inspiration for me,” said Sauthoff. “He was a leader in a generation of PPPL physicists who studied mechanics and energy systems intensively. He was able to “diagnose” many a recording just by hearing the systems moan. “

The symmetrical tokamak confirmed that the tokamak could contain the super-hot, electrically charged gas called plasma better than the early stellarators. This led to the construction of the Princeton Large Torus (PLT), which began operations in December 1975. Stodiek was head of the PLT test program in 1978 when the tokamak set a world record for reaching ion temperatures of 60 million degrees Celsius with a neutral beam for heating.

“It was an exciting time,” recalls Phil Efthimion, Head of Plasma Science & Technology, who joined the PLT team in 1977 after completing his doctorate. at Columbia University. “The machine had some spectacular results with neutral radiation heating and RF (high frequency) heating.”

I will always remember Wolfgang because he is able to grasp the essence of a problem quickly, ”said retired PPPL physicist Robert Kaita. “We used to joke that due to his“ no-frills ”approach, he only needed a multimeter to know how the PLT behaves based on the loop voltage. However, it didn’t stop him from offering me kindness and encouragement as a young physicist that I will never forget. “

The PLT is also characterized by the use of X-ray diagnostics, which was developed by a group headed by Goeler and to which Sauthoff, Ken Hill and Manfred Bitter belonged. Bitter was a lifelong friend of Stodiek, who often visited him in Germany. “He was a very technical person and he knew everything about PLT,” Bitter said of Stodiek. “Physics was his life.” Stodiek is named along with Bitter, Ben Fraenkel, James Gorman, Ken Hill, Lane Roquemore and von Goeler as one of the inventors of a patent for an X-ray spectrometer from 2001.

Stodiek was a good leader, said Efthimion. “I knew very little about tokamaks at all and I got there and was impressed by all of these powerful physicists who were sitting at the machine, all of them very strong-willed, and Wolfgang managed the entire experiment,” he recalled. “I think they brought him there because he was very strong-willed and could lead the group.”

Michael Zarnstorff, chief scientist of the PPPL, recalled that Stodiek was “an elderly statesman” at PPPL, with whom he liked to talk about Stodiek’s “skeptical view” of fusion energy. “Efthimion agrees. “He was a little pessimistic, but it didn’t stop him from doing great things,” he said.

Elsmarie Stodiek said her husband continued to devote himself to plasma physics and the PPPL. “When I met him for the first time, he just said to me,” My job is my hobby, “she said.” He loved it and he was very happy there. “