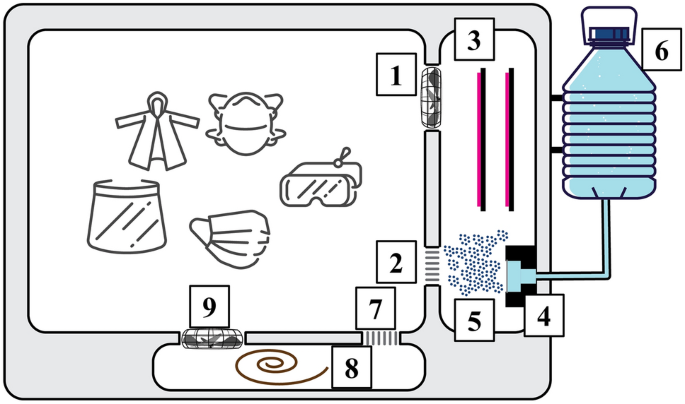 Schematic of plasma system. It consists of three chambers: large 53-L open area for the PPE, the plasma chamber (#1–6) and heating chamber (#7–9): 1. Fan forcing the air into the plasma chamber . 2. Exit from the plasma chamber where droplets, mixed with plasma-generated reactive oxygen and nitrogen species (RONS) are introduced into the area with the PPE. 3. Plasma is generated with a 20 kHz, 3,000 V dielectric barrier discharge. 4. Ultrasonic nebulizer is used to generate water microdroplets with a mean diameter of ~ 5 µm. 5. Water microdroplets form a dense fog that is produced immediately after the plasma zone and mixed with RONS. 6. Each cycle consumes 1 ml of DI water or other solutions and our current prototype has a 750 ml container. 7. For the heated air cycle, the air (containing residual RONS and moisture) is sucked in from the chamber with the PPE. 8. The air-RONS-moisture is heated to 50 °C to facilitate removal of the residual reactive chemistry and drying of the PPE. 9. Warm air is forced into the chamber with the PPE by a fan.

A pre-set program was installed in the system through Arduino. The program was used to control operation time of DBD reactor, fan, nebulizer, and the drying system. In this study, we set the disinfection process in 3 stages for 20 min total. The first stage was set as 5 min DBD reactor, fan and nebulizer on; the second stage was 5 min DBD reactor and fan operating without the nebulizer; and only the drying system is on during the third stage for 10 min. During the drying cycle, the temperature at the exit of the heating zone was increased to 50 °C by flowing air using a standard computer fan at approximately 30 CFM over a resistive heating coil. Voltage to the coil was monitored by an Arduino microcontroller and raised or lowered to maintain the chamber temperature at the preset 50 °C.

The working solution of two bacteriophage viruses, MS2 (ATCC 15597-B1) and T4 (ATCC 11303-B4) were stored at 4 °C before testing. The concentration of stock was quantified by plating appropriate dilutions by the overlay plaque assay method on LB Agar22. Briefly, underlay agar plates were made from LB agar (MP Biomedicals). The top agar was made from the same media type but with lower concentration of agar. The mixture of 100 μL MS2 or T4 stock, 100 μL the host (Escherichia coli MG1655) and 5 mL of molten top agar were plated on the top of underlay agar. After the top agar solidified, plates were incubated at 37°C overnight.

Two commonly used N95 respirators (3M 1804 and 3M 1860) were tested in this study. Two sides of 3M 1860 were tested because they were made of different materials. N95 respirators were cut into 1 × 6 cm coupons. 100 μL of virus stock were spot-inoculated onto each coupon. Coupons were left in a laminar flow safety cabinet until dry (approximately 3 hours) before treatment.

Phage recovery from coupons and quantification

After treatment, T4 or MS2 was recovered from face mask materials by shaking or vortexing in 10 or 15 mL of sterile phosphate buffered saline (PBS). N95 1860 outer layer and 1804 coupon were extracted by 15 mL of PBS; N95 1860 inner layer was extracted by 10 mL of PBS. Shaking for 20 min at 200 rpm performed a higher recovery efficiency than vortex for 1 min, so shaking was used in most of the experiments in this study (supplementary material recovery efficiency of MS2 and T4 from N95 respirator material).

Double agar overlay plaque assay was used to quantify viable viruses recovered in terms of plaque forming units (PFUs). No treatment controls were also performed to account for any loss in viable viruses (PFUs) not associated with treatment in our system.

Chemical properties of plasma-activated mist and conditions in the chamber

The chemical properties of PAM were determined by measuring pH (Hydrion, range 0–3 and range 0–6), NO3− (Quantofix, range 10–500 mg/L), NO2− (Quantofix, range 1–80 mg/L ) and total peroxide (Quantofix, range 50–1000 ppm) via commercial test strips. Test strips were placed in the middle of the chamber of our system during one decontamination cycle. After the cycle finished, test strips were read by comparing the color table provided by the manufacturers. Condensed water was collected by covering aluminum foil on the exit of plasma chamber for 1 cycle treatment (#2 in Fig. 1) and then measured pH, NO3− and NO2− via test strips.

Temperature and humidity were measured by a data logger (Elitech GSP-6G). The sample was kept in the middle of the chamber while operating. Ozone was measured using 254 nm narrow wavelength UV absorption (model 106-M ozone monitor, 2B Technologies, Boulder).

The filtration efficiency of N95 respirators was conducted before and after different numbers of cycles treatment (1 or 20 cycles) in our system. Particles were generated in a 400 L stainless steel chamber, and by counting particle concentrations in an alternating manner between air sampled ( i) directly from the chamber and (ii) through the filter media. The removal efficiency of N95 respirators was computed by using Eq. (1):

where η is the filter removal efficiency; and Chamber and Cfilter (#/cm3) are the particle concentrations in the air from the chamber and through the filter media, respectively.

Particles less than ~ 1 μm were generated using aerosolized sodium chloride (NaCl) via an aerosol generation system consisting of these items in series: an atomizer with a solution of DI water and sodium chloride (NaCl) to generate NaCl particles (TSI Aerosol Generator 3076 ); a diffusion dryer to remove water from the air stream (TSI Diffusion Dryer 3062); and a neutralizer to apply a standard, equilibrium charge distribution (TSI Aerosol Neutralizer 3077A). Chamber air was mixed with fans so that concentrations were uniform. Tested filter media were held in a 3D-printed filter housing. Flow rates were designed such that the face velocity through the filter media was 10 cm/s. Particles were counted with a TSI Fast Mobility Particle Sizer (FMPS) 3091, which measures size distributions each second using 32-channels between the diameter size range of 0.0056 and 0.56 μm. The outcome of this procedure, for each tested filter media, is a determination of the filter removal efficiency for total particles and as a function particle size (with diameters between 0.0056 and 0.56 μm). Results from this procedure allow comparison with those of an N95 test, which tests for 95% removal efficiency of 0.3 μm diameter particles.

Data sets were analyzed using SPSS. The P value of < 0.05 is considered significant. The data are means ± standard deviations (SDs).