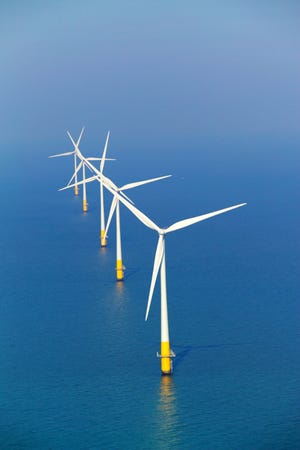 The developer of New Jersey’s first offshore wind farm plans to move the project’s power lines under Island Beach State Park across Barnegat Bay and connect them to the power grid of the former Oyster Creek nuclear power station. This is evident from plans submitted to the Federal Bureau of Ocean Energy administration.

Ørsted, the Danish energy company proposing the construction of 98 wind turbines southwest of Atlantic City, has asked the office to build an offshore wind farm strong enough to supply half a million households with electricity.

Environment and energy:NJ Natural Gas plans to raise interest rates on the pipeline by nearly 25%

If approved, the construction of a wind farm would include tunneling under Island Beach State Park and laying power lines under the swimming area 2 auxiliary parking lot. From there, the power lines would run under the bottom of Barnegat Bay to the southwest and connect to the former Oyster Creek nuclear power plant, which ceased generating electricity in 2019.

The power lines would run along Bay Parkway and Lighthouse Drive in Waretown.

The wind farm will also be connected to the grid at the site of the former BL England coal-fired power station in Upper Township, Cape May County. This plant was shut down in 2019.

“We believe these locations are some of the best places to get this energy,” Jeff Tittel, director of the New Jersey Sierra Club environmental group, said in a statement. “There are already substations and transmission lines that can be connected so that no new lines have to be built.”

Østed’s application to the federal agency is the final step in a series of federal and state permits required for the utility’s project to move forward.

Last month, the White House said the office would prepare an environmental impact statement for Ørsted’s ocean wind project and the federal energy department would offer loans of up to $ 3 billion to offshore wind developers.

If approved, construction of Ocean Wind would begin in 2023, according to the utility company’s plans.

Environment New Jersey nonprofit group supported the proposal during a public hearing with the office.

“We have no time to waste,” said Hayley Berliner, Clean Energy Associate at Environment New Jersey. “Rather than moving on to catastrophic sea level rise and flooding, we can mitigate this by replacing our fossil fuel power with clean, renewable offshore wind power. New Jersey is uniquely positioned to be a national leader in this industry. “

Amanda Oglesby is from Ocean County and covers the townships of Brick, Barnegat and Lacey as well as the environment. She has worked for the press for more than a decade. Reach her at @OglesbyAPP, [email protected], or 732-557-5701.