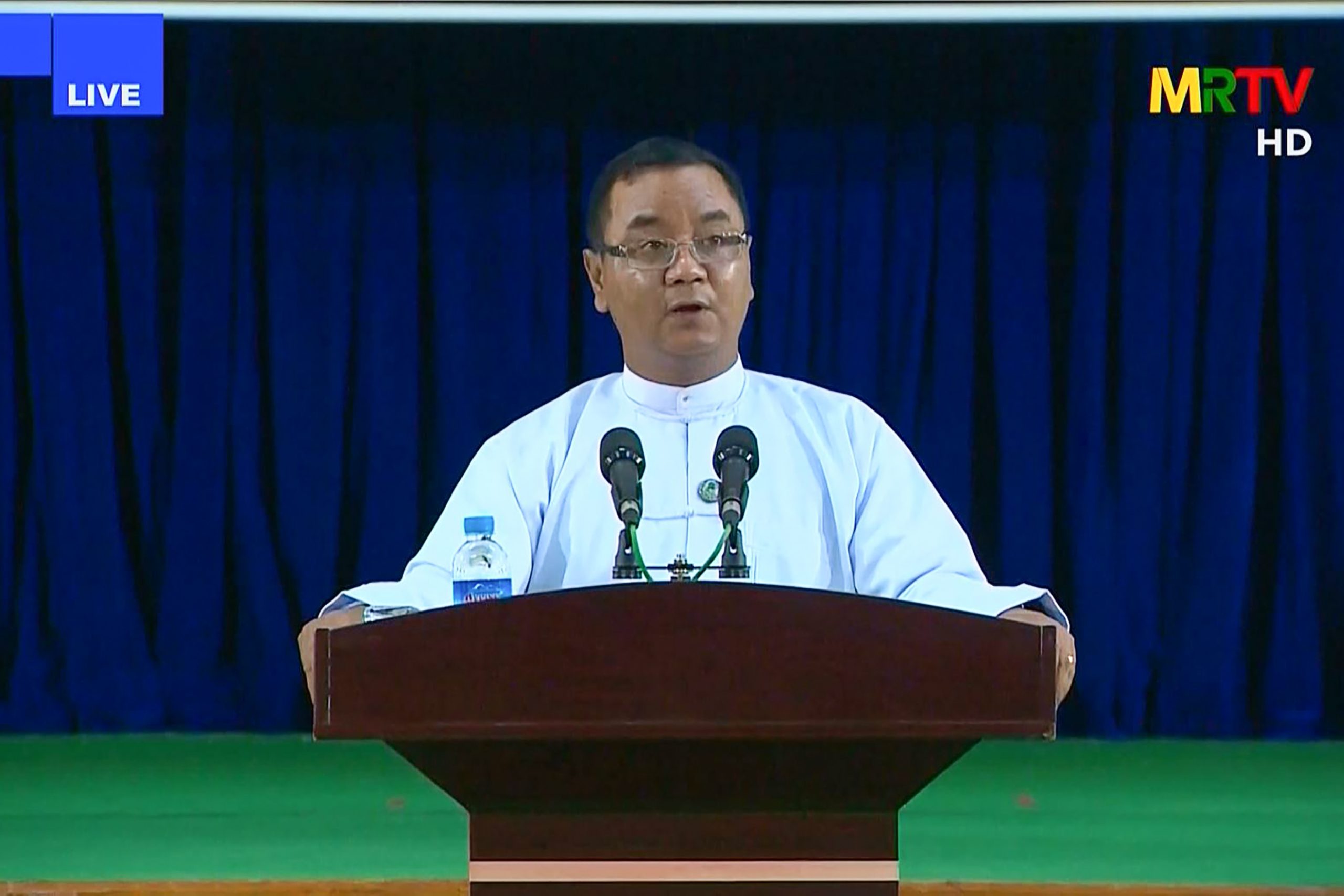 Min Aung Hlaing and his wife feed a ‘white elephant’ in Naypyitaw on Wednesday. / cincds

Myanmar military regime spokesperson Zaw Min Tun said staff from the US Embassy in Yangon needed to be sent back to the States in haste if US President Joe Biden really said, as a pro-regime media representative falsely claimed that the junta should hold an election as soon as possible in order to put Myanmar on the path to democracy.

“If what you said is true the US Embassy here will be in trouble. We will have to send them back because there is a damn contradiction between [comments by] their president and them,” said the spokesperson, who is known for his rude comments and unprofessionalism.

The drama unfolded during the regime’s most recent weekly press conference, which was packed with people from regime-sponsored media.

A self-proclaimed journalist from NHP news, while asking rambling questions on topics ranging from the regime’s planned election to transportation, interpreted a comment by Biden on the need to put Myanmar back on a democratic path as “urging” the regime to hold its election “As soon as possible.”

The so-called journalist from the pro-regime media outlet appeared to be unaware that the US Embassy in Yangon early this month released a statement in which US Secretary of State Antony Blinken said the regime’s planned elections next year would be a sham and urged the international community to refuse to recognize the military and its so-called election. Biden said in January that the regime should immediately engage in a meaningful dialogue with all parties to return Myanmar to its democratic path. Neither the president nor the embassy have ever supported regime-organized elections, which have already been denounced by the Myanmar people.

In September, following Queen Elizabeth II’s funeral, a journalist from a pro-regime media outlet told Zaw Min Tun he had learned that Buckingham Palace was haunted and asked him whether the palace had invited monks from Myanmar to recite Buddhist mantras there to help the Queen’s soul rest in peace Representatives of the junta’s Electricity and Energy Ministry and Russia’s Rosatom sign an MoU on a feasibility study for implementation of nuclear power plants in Myanmar on Nov. 23. / Cincds

The military regime’s Ministry of Electricity and Energy and Russia’s state-run nuclear corporation Rosatom signed a memorandum of understanding (MoU) to conduct a survey on the construction of nuclear power plants in Myanmar.

The MoU was signed on the sidelines of ATOMEXPO-2022 in Sochi, Russia. The proposed nuclear power plants will be based on Russian small modular reactor technology,

The regime said it would only use nuclear energy for peaceful purposes. But its words are hard to believe considering it has been killing its civilians with weapons supplied by Russia, and has ignored the international community’s demands to end its violence.

The two accompanied the junta chief on his trip to Russia in September, and also flew to the country in October.

The regime has said it is trying to make sure the whole country has access to electricity by 2030. With Russia also extending an offer to help in the country’s education sector, it appears that Russian President Vladimir Putin and Min Aung Hlaing are entering a comprehensive strategic partnership.

Moscow has emerged as the largest arms supplier to the military junta since the coup, while also defending the regime on the international stage and providing diplomatic support. The cooperation recently widened into the economic sector with Russia promising to transfer nuclear energy technology to the junta.

Since 2000, Russia has trained more than 7,000 Myanmar military officers for master’s degrees and doctorates. Now, the two countries are seeking cooperation in education outside military trainees. Min Aung Hlaing has warned his regime’s regional and state governments to make sure projects being implemented by them are making progress and achieving their stated purposes.

Addressing a meeting of the junta’s financial commission on Thursday, the junta boss said regional and state governments have failed to work properly on projects for which they requested funds from the central government.

Some local governments have given up on proposed projects after they were given the funds they asked for, he complained. Meanwhile, some projects could not be initiated, and some projects were left incomplete, creating a debt burden for the regime, he added.

The complaint follows Min Aung Hlaing’s warning to his ministries last month not to waste funds. He often lectures Myanmar people on the need to reduce rice, cooking oil and fuel consumption, and not to waste electricity and water.

At the same time, Min Aung Hlaing, who chairs the financial commission, has been squandering public funds on vanity projects and ceremonies that serve no purpose other than to fuel his endless ego trip.

Honey, We Shrunk The Nuclear Reactor