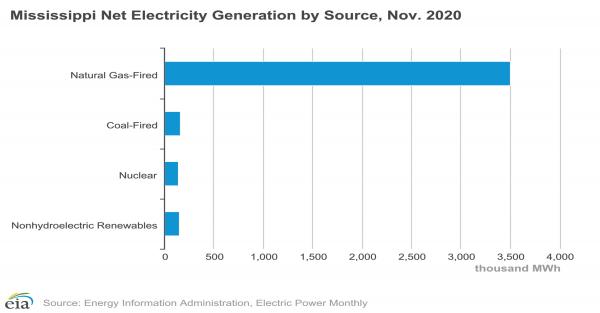 After a slow start, solar power is becoming a bigger part of the state’s power generating capacity in Mississippi.

There are eight solar projects that have either been approved by the state commission for the public service or are in the approval process and could achieve a total capacity of more than 806 megawatts if all projects are implemented.

According to the EIA, natural gas drives 88.34 percent of the state’s generation capacity. In second place is coal (4.1 percent after 24.5 percent in 2000), in fourth place (3.67 percent) from the state’s only nuclear power plant on the Grand Gulf.

If all eight projects are completed, more than 20 percent of the state’s electricity generating capacity could come from solar energy.

Entergy received Commission approval in April 2020 for a 100-megawatt solar farm on 1,000 acres in Sunflower County of the Mississippi Delta, which is scheduled to go into operation in the first quarter of 2022.

Entergy spokeswoman Mara Hartmann told Northside Sun that construction of the Sunflower County facility will begin in March. She also said the success of the first three projects to test how different types of arrays and panels in different geographic areas led the company to build a larger facility.

The state’s other investor-owned utility, Mississippi Power, has four power purchase agreements nationwide with solar developers for a total of 155 megawatts. The state’s Southern Company’s subsidiary filed an application in September 2020 to build a 1.285-megawatt solar array in Leake County near Walnut Grove that would also include 5.14-megawatt battery storage.

One of the new installations that could be approved by the state public service commission is a 175-megawatt solar installation known as the Pearl River Solar Park, which would be the largest in the state by area. The facility will require an initial investment of $ 235 million and will be owned by EDP Renewables North America, a Houston-based energy company. According to reports, construction will begin in 2022 and commercial operations will commence the following year.

The facility will be built on 1,760 acres in northwest Scott County directly across from Rankin County.

According to the documents submitted by EDP to the PSC in December 2020, the electricity customer for the solar park has yet to be determined, but the company is in talks with potential customers.

Also in December 2020, MS Solar 5 LLC submitted an application to PSC for a 200-megawatt solar array and 50-megawatt battery storage facility in Lowndes County, which will require an initial investment of $ 200 million. MS Solar 5 has already signed a power purchase agreement with the Tennessee Valley Authority. Origis Energy USA, which owns the planned facility, has won a competition to supply the TVA with renewable energy. Construction is scheduled to start in June this year.

In May 2020, Cane Creek Solar LLC filed an application to build a 78.5 megawatt facility in Clarke County, which will require an initial investment of $ 80 million. Like the Pearl River Solar Park, the decreasing utility has yet to be named.

submitted an application to the Commission to build a facility of similar capacity (78.5 megawatts) in Hancock County. As in the two aforementioned facilities, the company is looking for a customer for the electricity and also needs a $ 80 million investment.

In 2019, Deltas Edge Solar filed an application to build a 100 megawatt solar array in Carroll County, which would require an investment of $ 109 million. The electricity it produces is sold on a 15-year contract to the state’s largest nonprofit electrical cooperative, Cooperative Energy (which powers the 11 member associations that serve 55 of the state’s 82 counties).

The facility was approved after a public hearing in January 2020. According to a report in the Greenwood Commonwealth, the planned facility has been acquired by Cubico Buffalo Holdings and is expected to go into commercial operation by November 2022.

In January 2019, Silicon Ranch applied for the construction of a 73-megawatt solar system and a further 5-megawatt system for Naval Air Station Meridian, the US Navy’s largest system in Mississippi.

WCS will not seek nuclear storage site in Andrews without approval from State of Texas – NewsWest9.com