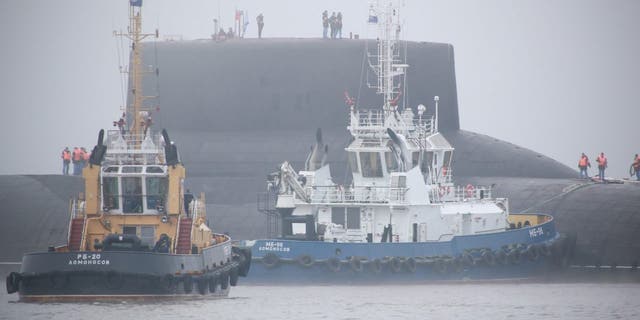 The submarine was launched in the city of Severodvinsk on the White Sea after being developed by the Russian ship building company Sevmash – a subsidiary of the United Shipbuilding Corporation which oversees the construction and maintenance of Russia’s navy.

Putin championed the fleet as being beyond compare to any other naval fleet in the world.

While the “Emperor Alexander III” – capable of carrying 16 Bulava intercontinental ballistic missiles – will undergo testing next June according to state media RIA, three other vessels were donned with the Russian flag Thursday and will begin military service.

“The new submarines and surface ships have modern navigation, communications and hydroacoustics systems, high-precision weapons and robotic systems,” he said.

Another nuclear submarine cruiser titled “Generalissimo Suvorov,” a small missile ship called “Grad” and the sea minesweeper, “Anatoly Shlemov” were all officially handed over to the Navy in a ceremony.

“I would like to congratulate all Russian sailors and shipbuilders on this significant milestone event for the fleet,” Putin said, adding the additional vessels “significantly increase the capabilities of our nuclear naval forces.” 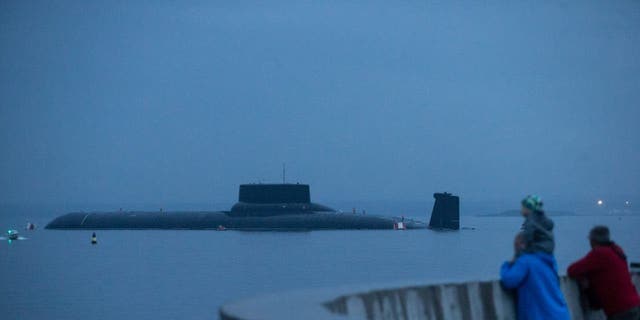 Russian Navy’s TK-208 Dmitry Donskoy nuclear submarine is prepared for the Navy Day parade in Kronshtadt of the suburb of St. Petersburg.
(Photo by Igor Russak/NurPhoto via Getty Images)

The “Generalissimo Suvorov” also wants to be armed with Bulava intercontinental ballistic missiles.

The two most recent nuclear-powered – and potentially nuclear-armed – submarines means that Russia’s navy will soon have seven of the top vessels with more planned for future development.

“Four more such submarines will be built as part of the current state armament program, which will ensure Russia’s security for decades to come,” Putin said during the ceremony Thursday.

The “Grad” is small rocket ship that Putin said has “high efficiency in solving combat missions in Syria,” while the “Anatoly Shlemov” is a mine-sweeping vessel “considered one of the most successful Russian developments in surface shipbuilding,” according to the Kremlin chief.

Putin pledged to continue developing Russia’s naval capabilities as the war in Ukraine rages and said, “we will increase the pace and volume of construction of ships.” 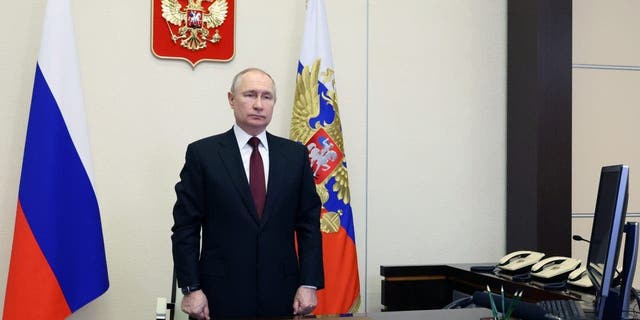 Russian President Vladimir Putin listens to the national anthem as he oversees the commissioning of new ships for the Russian navy via video conference at the Novo-Ogaryovo residence outside Moscow, Russia, Thursday, Dec. 29, 2022.
(Mikhail Klimentyev, Sputnik, Kremlin Pool Photo via AP)

He said that “taking into account the experience gained, including during a special military operation,” Moscow will equip its navy “with the most modern weapons, [and] conduct operational and combat training of sailors.”

“We will do everything necessary to reliably ensure security [for] Russia, the protection of our national interests in the oceans,” he added.

Caitlin McFall is a Reporter at Fox News Digital covering Politics, US and World news.