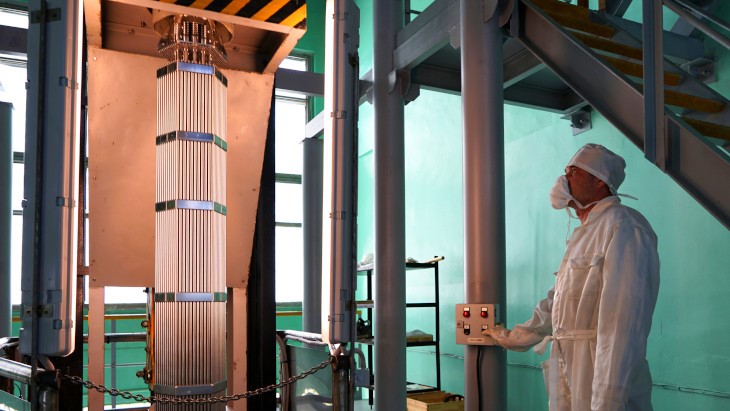 Russia is ready to test a batch of fuel assemblies made from recycled uranium and plutonium. The REMIX fuel concept could be used with any reactor and promises a leap in terms of resource efficiency and waste reduction, said Rosatom.

One of the first full REMIX fuel elements (Image: TVEL)

A batch of six REMIX fuel elements was produced by the Rosatom subsidiary TVEL in the Zheleznogorsk mining and chemical combine, Rosenergoatom announced yesterday. They are supposed to go through a complete operating cycle in one of the Russian VVER-1000 reactors.

This “will give us more information about the behavior of the REMIX fuel in the reactor core and its impact on reactor physics,” said Alexander Ugryumov, Vice President Research, Development and Quality at TVEL. “This would give us the necessary data for the approval of a full refueling of the core with REMIX assemblies as well as reference experience for the commercialization and introduction of such a fuel.”

This builds on the successful trial of three fuel elements, each with a few REMIX rods, in the Balakovo nuclear power plant, which was completed in September after five years. These assemblies are stored while high levels of radioactivity are degraded to such an extent that they can be examined in detail.

“Introduction of [REMIX fuel] would make it possible to exponentially increase the feedstock for nuclear power plants by closing the nuclear fuel cycle and also to recycle used nuclear fuel instead of storing it, “said Rosatom.

REMIX (from Regenerated Mixture) fuel is made from uranium and plutonium, which are recovered as an unseparated mixture from previously used fuel. They are replenished with low enriched uranium in order to obtain a fuel that functions within the same parameters as fuel made only from fresh low enriched uranium. This means that a reactor does not need any modifications to use REMIX.

The cycle of processing, recycling and replenishment can be repeated up to five times, each time removing the waste products from the fission and vitrifying them in glass for permanent geological disposal. In theory, a new reactor could operate and continuously circulate on only three REMIX fuel charges for its entire 60 year design life.

In August last year, Rosatom approved the investment to build a complete production line for REMIX fuel. The uranium-plutonium fuel pellets are produced in the mining and chemical combine in Zheleznogorsk in the Krasnoyarsk region, where there is already a large storage facility for VVER-1000 fuel. The pellets are processed into finished fuel elements in the Siberian Chemical Combine in Seversk in the Tomsk region in Russia.