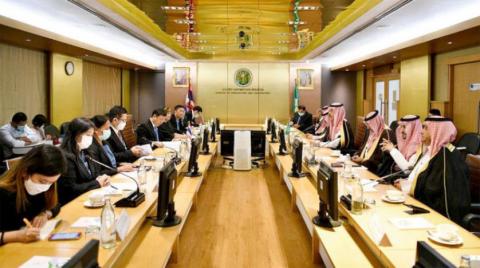 A Thai official revealed his country’s efforts to build bilateral partnerships with Saudi Arabia to enhance food security, stressing that his country would study and address challenges facing Saudi investors in exporting to Thailand.

He made his remarks during a meeting in Bangkok on Tuesday that brought together Thailand’s Deputy Minister of Agriculture and Cooperative Societies and a delegation from the Chamber of Commerce and Industry in Riyadh.

The Thai official underlined the importance of the meeting, noting that the Saudi delegation, which boasted over 100 businessmen, was the first and largest to visit Thailand in 32 years.

Chairman of the Agriculture and Water Committee in the Riyadh Chamber Dr. Ibrahim Al-Turki said the Kingdom was interested in strengthening its capabilities and developing its investment and trade relations with countries across the globe to promote food security. He noted that Thailand’s huge agricultural wealth would have a major role in forging more partnerships with Saudi Arabia.

He added that Thailand’s advanced technologies in agriculture were a source of confidence and a great opportunity for the Saudis to build multiple partnerships in this particular field.

Trade and economic relations between Saudi Arabia and Thailand were recently revived after being suspended for three decades.

The Saudi-Thai Investment Forum was launched in May in the Saudi capital, where a number of MoUs were signed between the Ministry of Investment and an official Thai delegation.

The delegation of the Riyadh Chamber discussed in Thailand opportunities for cooperation in mining technologies, in addition to strengthening partnership in the field of research and industrial consultancy.