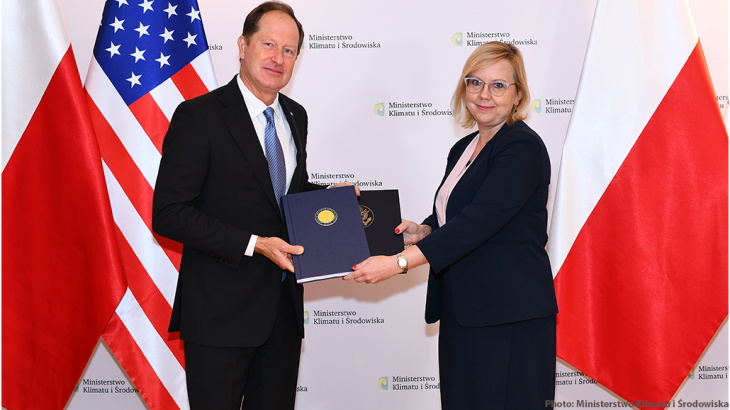 The USA and Poland have set out a detailed bilateral roadmap for the construction of six large nuclear reactors using US technology and a framework for strategic cooperation in civil nuclear energy.

Brzezinski and Moskwa pictured at the ceremony in Warsaw (Image: Ministerstwo Klimatu i Środowiska)

The Concept and Execution Report for Civil Nuclear Cooperation was delivered to Poland’s Minister of Climate and Environment Anna Moskwa in Warsaw by the USA, through the Department of Energy (DOE) and US Ambassador to Poland Mark Brzezinski, joined by Westinghouse Poland President Miroslaw Kowalik and Bechtel General Manager for Nuclear Power Ahmet Tokpinar.

The report, which fulfills an obligation under a 2020 intergovernmental agreement on nuclear energy cooperation, reflects more than 18 months of intensive work and millions of dollars of US-funded analysis and assessments, the two nations said in a joint press release. It is supported by detailed studies by Westinghouse and Bechtel on the feasibility of AP1000 technology to deliver on the expectations of the Polish Nuclear Power Program and Polskie Elektrownie Jądrowe (PEJ), the investor in the construction of nuclear power plants in Poland. The final document has been reviewed by a bilateral steering committee co-chaired by Deputy Minister Adam Guibourgé-Czetwertyński from Poland’s Ministry of Climate and Environment and DOE Assistant Secretary Andrew Light.

“The report is a major step towards Poland’s development of a robust civil nuclear industry that is zero-carbon emitting and will result in another European source of energy that is free from Russian influence,” US Secretary of Energy Jennifer Granholm said.

The report will be taken into account by Poland’s government when it takes key technology-related decisions this autumn, Moskwa said. “Nuclear power deployment in Poland will significantly contribute to socio-economic development and what recently became crucial due to the outbreak of Russia’s aggression to Ukraine – to ensuring energy security,” she added.

Poland plans to have nuclear power from about 2033 as part of a diverse energy portfolio, moving it away from heavy dependence on coal. PEJ has selected a site at Lubiatowo-Kopalino as the preferred location for the first of six large plants. In addition, several energy-intensive industrial companies are working towards upgrading plants to include small modular reactors, and high-temperature reactors for industrial heat production have been included in the government’s draft development strategy since 2016.

Germany’s Steag ready to bring back 2.3 GW of coal capacity with conditions – Reuters