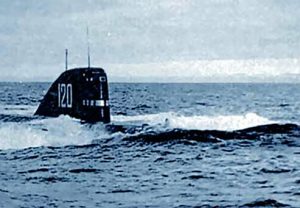 Rosatom, Russia’s state-owned nuclear company, has announced a tender for the disposal of reactor cores from the submarine K-27, which was sunk by the Soviet Navy in the Kara Sea four decades ago.

The tender specifically speaks of the preparation of the dismantling and dismantling of the used removable cores from the reactor of the nuclear submarine Project 645 (point 64). These removable parts, which were removed in 1967, are currently in the Gremikha camp base in the Murmansk region of Russia.

The tender also calls for cassettes of these irradiated parts to be prepared for transport to a storage location of the federal nuclear fleet, from where they will be sent for processing. The price for the task is 500 million rubles, about $ 6.7 million.

Anatoly Grigoriev, Head of International Technical Assistance Projects at Rosatom, confirmed that the tender relates to the removable reactor cores from the K-27, which were extracted in 1967. After unloading, the kernels were deposited on the Gremikha base.

“It is worth noting that the publication of the tender attracted a lot of attention and led to conflicting interpretations,” said Andrei Zolotkov, who heads Bellona’s Murmansk office. “Firstly, it is not clear why a submerged nuclear submarine is labeled“ scrapped ”. Second, it was not clear how it was possible to prepare for the disposal of used removable parts of a nuclear submarine at the bottom of the Kara Sea if the decision to lift it had not yet been made. ”

The K-27 was deliberately sunk in the Stepovoy Bay of the Kara Sea in 1981. It is classified by experts as particularly dangerous due to its liquid metal-cooled reactors.

At that time, the submarine was being prepared for flooding by filling it with bitumen, concrete and furfural. However, it is likely that these substances left air pockets that would allow condensation to form in the sunken hull.

The submarine has been included in a priority list of federal sunken objects to be lifted from the ocean floor. The urgency is due to the high level of nuclear fuel enrichment of the K-27 and the shallow depth of 33 meters in which it lies. The furfural combination filler, with which the submarine is sealed before it sinks, also has a limited shelf life and only lasts a few years. Some experts also fear that the nuclear fuel on board the submarine could start a spontaneous chain reaction if it is injured by water.

Discussion among Russian officials about removing various pieces of nuclear debris from the Arctic has intensified in recent years. In 2019, a group of Russian scientists collected, systematized, and analyzed data on each of these sunken nuclear and radiation hazards and identified the most dangerous among them. The K-27 is listed as one of six such threats to be raised as part of a federal effort known as the “Strategy for the Development of the Arctic Zone of the Russian Federation by 2035”.

The problem is that lifting the flooded objects is an extremely difficult task, as demonstrated by years of efforts to lift the Kursk nuclear submarine, which sank during a naval exercise in 2000 and killed all 118 crew members.

Russian scientists have weighed the options for reversing the threats and calculated possible damage in the event the operations fail. The consequences could be severe and include releases of radiation to the sea and air, with the contamination potentially exceeding Russia’s borders.

The engineers are currently planning a ship with which these sunken radiation hazards can be removed from the sea floor. A salvage ship is to be built by the end of 2026. The subsequent lifting and dismantling of the K-27 is expected to last from 2028 to 2013.

According to Rosatom, the total activity of submerged radiation hazards in the Kara and Barents Seas is 1 million curies. According to preliminary estimates by Russian specialists, they can all be extracted within 12 years.